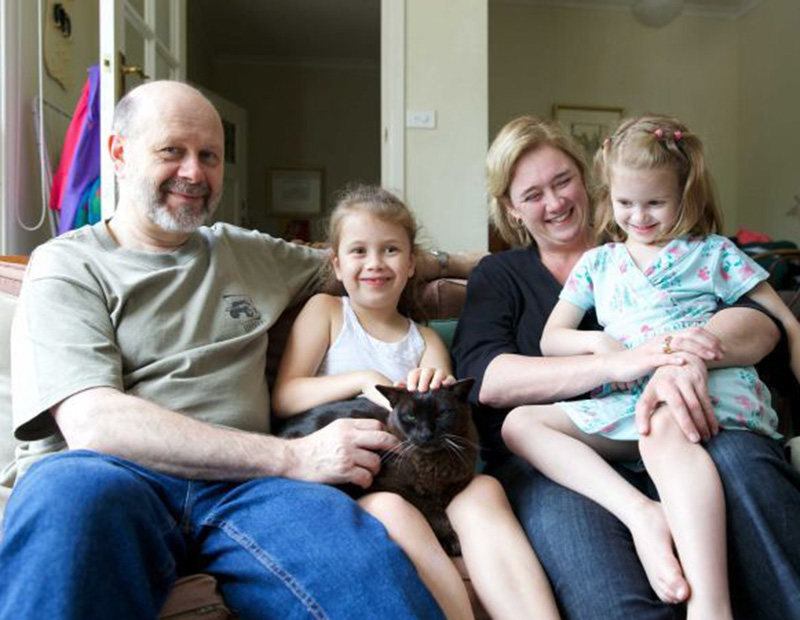 It is the second unlikely love story to emerge from the revolution in the way we make babies and form families, and it has thrown up some serious new challenges for regulators and law makers.

Melbourne IT specialist and sperm donor George Deka met his biological daughter 10 months after her birth — and ended up falling in love with her mother.

Their story echoes that of Aminah Hart and Scott Andersen, whose back-to-front love story entranced the world after it was revealed on Australian Story.

I am the biological and social father of both children, but the legal father of only one.

Mr Deka was a middle-aged introvert who had given up on finding a partner and having a family of his own, leading him to become a sperm donor.

Kerrie Hancox was an outgoing psychiatric nurse who sought out IVF treatment using an unknown sperm donor following the death of her partner.

Ms Hancox and Mr Deka were “diametrically opposite”.

“If they’d met in a bar I don’t think they would have connected at all,” Ms Hancox’s friend Mish Inifer said.

But the couple “clicked” and 12 months and 12 days after their first meeting, their daughter Ella, conceived naturally, was born.

But the story of Mr Deka and Ms Hancox has thrown up some unique challenges, Dr Fiona Kelly of La Trobe University’s law school said.

“As people search for donors, we are going to have situations where the law simply doesn’t envisage the scenario that they’ve raised,” Dr Kelly said.

“You can’t control for human nature.”

La Trobe University senior law lecturer Dr Fiona Kelly:
“Australia is considered one of the most progressive countries in the world with regard to the overall regulation of assisted reproduction, with the state of Victoria leading the way.”With regard to unknown sperm donation, we’ve abolished that system of anonymity and replaced it with one that permits access to information about the donor when the child turns 18, or before via the voluntary register.

“Australian states have legislated largely appropriately to facilitate a progressive model, but it’s obviously still incomplete. As an industry I’d say it is struggling to keep up.

“It’s had to move quickly to respond to the changing needs of society and the bigger ethical and social questions that we now have around children’s identity and the importance of knowing one’s biological origins.

“Ultimately it’s a big business, making sure that more women conceive and often making a considerable amount of money.

“Single women are by far the fastest growing user group in Australia. They’re the group that the law has thought about the least, if at all, and the group that raises some of the bigger questions certainly around access to donor information.

“They are the most likely to seek contact with a donor and to find out additional information about him.

“I think it’s for reasons around there being no third party, a partner who is concerned about their own position in the family.

“It’s not surprising that once donors become known to women that they seek out some kind of relationship with them, not typically a romantic relationship, but a relationship that might benefit their child in the future and that might ultimately be a family or familial relationship.

“I think single women are the most vulnerable under our current laws, which don’t really consider what will happen if a donor does become known to a recipient. So what is his legal status with regard to the child?

“This is seen as a positive provision because it creates certainty for both donors and recipient.

“But cases like this could be perceived as a potential gap. And I think that, as people search for donors, we are going to have situations where the law simply doesn’t envisage the scenario that they’ve raised.”

“I wanted Clare to be able to look at her birth certificate and see her father’s name there,” Ms Hancox said, so the couple applied to Births Deaths and Marriages but it was rejected.

Mr Deka said: “What this means is that I am the biological and social father of both children, but the legal father of only one – Ella. Not Clare.”

Ms Hancox says the “different status” of her children has a range of implications, from inheritance and passports, as well as potential implications in the event the unexpected death of either parent or unforeseen family conflict.

“And just on a personal level, how Clare feels when her sister has a different status,” she said.

Though the couple maintain separate houses they are raising their daughters, now 7 and 5, together.

Mr Deka said Clare was the first child he ever held.

“It was exciting, it was scary as well. I just didn’t want to drop her, I’d never done it before,” he said.

The couple is currently exploring a range of options to have Clare’s birth certificate amended — from a family court application to adoption.

However there are no obvious solutions and all possible options raise further problems for their “unconventional family” arrangement.

“I suspect that we may be one of the first, if not the first.

Modern love story has law-makers in a bind