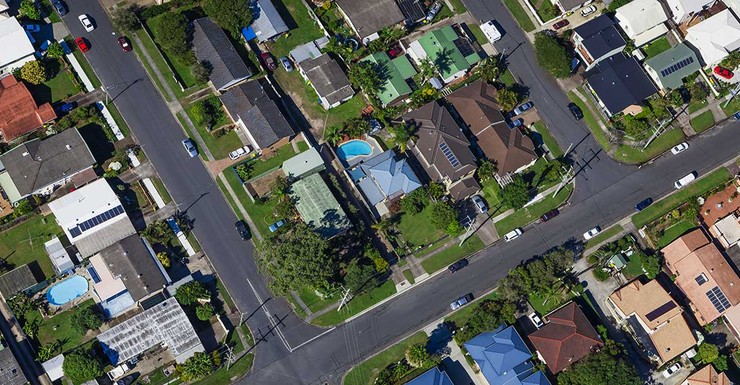 About 90 per cent of Australian capital city residents live more than 5km from the CBD. I was one of them. I moved from Richmond, an easy walk from Melbourne’s CBD, to a suburb which is a decent car ride from town. But is the backyard all its cracked up to be? For me, I gained space but lost connection with a community.

My husband and I held onto our inner-urban lifestyle for as long as we could. Our first baby was born into our cosy two-bedroom terrace house. I spent a lot of time pounding the streets with my pram and found a collection of new friends at the local park. But a little over a year later, we welcomed the news of a second baby and traded in our urban pad for land and space. Owning a detached house on a fenced block of land seemed like the sensible choice.

While the move to a picture-perfect home with white picket fence, sprawling lawn and a real garden has its benefits, this space has disconnected me from life outside my front gate.

This space has disconnected me from life outside my front gate.

Our story is hardly unique. In a 2009 study Parental perceptions of residential location: Impacts on children’s health published in Health and Place, parents said they’d moved because of ideals around children – a home and garden.

But all respondents spoke of experiencing difficulties in raising children. Proximity to services like medical care, recreation facilities, transport and work became a problem. This unfortunately also extends to social interaction.

In the close quarters of my old postcode, high-density intimate living meant everyone in the street knew each other.

When we moved to suburbia, I had envisaged a friendly door knock from my neighbours welcoming us to the street with a homemade hamper and an open invitation to their social network. None were forthcoming. Three years on I barely see my neighbours at all.

Three years on I barely see my neighbours at all.

I am surprised by the lack of connection I have formed to my neighbourhood. I find myself often alone in an empty park, pushing the swing, yearning for company. I long for the crowds that gathered at the local park in my old postcode. We were forced out of our houses and into the parks and gardens where connections were made and friendships formed. We shared our war stories about childbirth and early parenting woes. I loved it.

A mere 100 metres from my house is a park and playground that is rarely attended. Perhaps my neighbours have their own gardens to play in and, like us, have a swing set, trampoline, cubby house and sandpit all in their own backyard.

My experience is reflected in a Deakin University study A Good Place to Raise a Family? which compared family life in an inner and outer suburb of Melbourne.

It found that outer-suburb parents and their children had all the necessary facilities to play in the home environment. So while adequate open space was available it was being sadly under utilised.

As one service provider said: “Home environments are too isolating for children. Screen time is increasing and they are then demanding screen time while at pre-school.”

One parent says while their outer suburban friends had a complete set-up at home, their “kids don’t go out as often as mine do, because we don’t have those facilities”.

The reliance and benefits of using public space in the inner ‘burbs was also reflected in the Deakin University study.

“The park comes to foster that sense of community,” one parent told the study.

“It’s a big meeting place. Whether we organise to meet someone there, you know [we’ve got] small houses, so it’s a wonderful place when you’ve got kids.”

I now shop at shopping centres because that’s what mums do in the ‘burbs. I don’t know any shop owners by name, apart from my local pharmacist. I felt more connected to my community in the inner-city.

The Deakin University study also found in the outer suburbs there “appeared to be a degree of social isolation amongst families”. Families said they “did not really run into” their neighbours.

This directly flows on to children with one parent saying: “I don’t know any of the kids in my street to let my son play with any of them.”

What does this say about the backyard dream? Perhaps it comes at a price. The connection to your own space can mean a detachment from what surrounds you.

Most parents agree that children should be playing outside and not lost to the ever-increasing world of technology and indoor living. We need to make a bigger effort to get out, interact more and share our experiences – perhaps this is why more Australian families are living in inner city areas.

Perhaps we need to find a way to include our neighbours rather than exclude them.

We need to find a way to include our neighbours rather than exclude them.

Australian musician Claire Bowditch, once lived in a house with no back fence. None of her neighbours had one, either. There were eight houses in on the ‘fenceless’ agreement and they shared a trampoline, sandpit, a clothesline, chickens and a mulberry tree. Each Sunday, these eight households gathered for dinner together.

Privacy and space are nice at times, but not at the cost of connection. Maybe I should knock down my back fence.

Is the grass truly greener in the ‘burbs? Not likely …