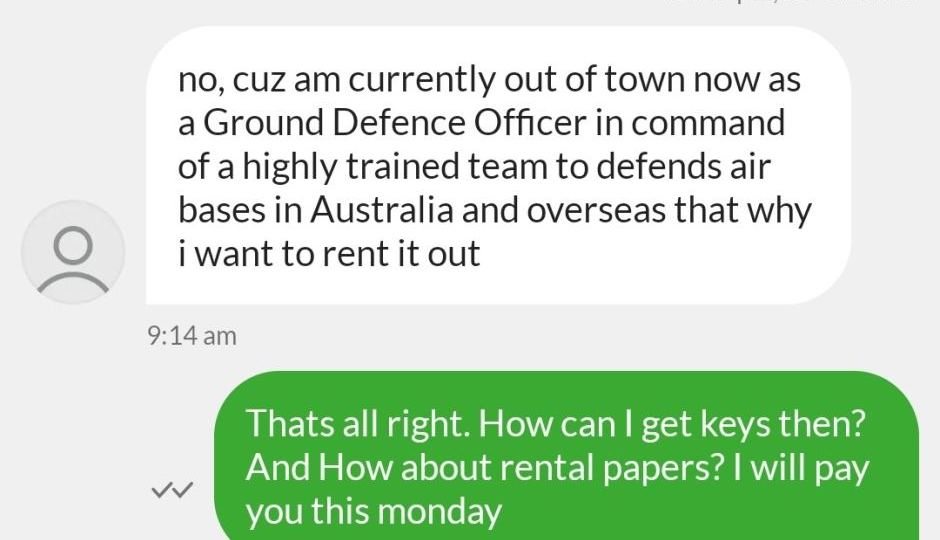 The scammer claimed to be away in the Defence Force but was renting a property out. Photo: Supplied/ABC

A couple looking to make a fresh start in Tasmania have fallen victim to a scam leaving them $2000 out of pocket, a real estate agent says.

Scammers posing as Australian Defence Force officers contacted the couple on popular buy-and-sell site Gumtree, offering them a property for rent and asking for $2000 as a bond to secure the property.

Launceston real estate agent Tim Saunders said the scammers replicated a property his agency had for rent, but at a cheaper price.

“They ghost properties and put them on sites that are outside the regular real estate portals,” Mr Saunders told Leon Compton on ABC Radio Hobart.

“They demand that for them to reserve the property they must pay four weeks’ rent or a bond up-front before they can reserve it.

“In this case it is a couple moving from Victoria who were struggling to find accommodation.”

It has sparked a reminder from consumer groups to view properties in person where possible, and meet with property managers or speak to them on the phone.

Latest figures from Scamwatch reveal that over the past two years almost 200 rental scams have been reported, with $120,000 in losses.

Mr Saunders said the couple were childcare workers trying to move to Launceston from Victoria. They had been struggling to lock in a property, so they placed an ad on Gumtree.

He said they could not afford to fly back and forth from Victoria to view properties in person, so were looking online.

“They scammed them for a couple of thousand dollars, which they can ill afford,” he said.

The couple contacted Mr Saunders’ business seeking the keys to the property, and it was revealed they had also been sent a phoney lease.

“At that point we realised something was afoot,” he said.

“I was just disgusted to hear what had happened.”

Mr Saunders said it appeared the scammers targeted people in desperate situations, and took advantage of English being the couple’s second language.

Scammers preying on demand for property

Tenants’ Union of Tasmania solicitor Ben Bartl said tenants should only sign a lease agreement after viewing a property.

“At a time of unprecedented demand for rental properties, it is no surprise that scammers are preying on people’s sense of desperation,” Mr Bartl said.

“It is illegal for property owners [in Tasmania] to receive bond from a tenant.”

Mr Bartl said a bond could only be paid online through the State Government’s MyBond system, through a real estate agency, or via Service Tasmania.

“We urge anyone who believes that they may be scammed to report it to Tasmania Police,” he said.

Mr Saunders said he had approved the couple as tenants, was trying to source them a suitable property, and his agency was helping the couple get their money back.

A spokeswoman for the ACCC said it was aware of one other rental scam where a fake property owner claimed they were in the Defence Force.

“Scamwatch is aware that this is a common tactic used by scammers as a plausible reason for not being contactable or able to meet in person,” the spokeswoman said.

“We have also received reports where scammers claim they are unavailable and working on oil rigs or cruise ships, etc.”

A Defence spokesman said scammers claiming affiliation with a reputable organisation to manipulate potential victims was a well-established modus operandi.

“The department has a number of ongoing initiatives to raise the awareness of its staff and highlight the predatory activities of scammers,” he said.

“These initiatives focus on the security of Defence ID and property, importance of security reporting, and the consequences of fraudulent and criminal activities.”

ABC Radio Hobart was contacted by multiple listeners who said they had been contacted by scammers claiming to have Defence Force links.

Gumtree’s advice to avoid scams is that face-to-face transactions are the safest, and if a sale sounds too good to be true it probably is.

The scammer involved in the bond case used the term ‘cuz’ in correspondence.

Gumtree advised that the use of slang in scams was common.

“While many scams follow a script, sometimes fraudsters use conversational and casual language to put the user at ease,” a warning on Gumtree’s website said.

“Their motive is to make you feel comfortable that they’re not the typical overseas scammer.”

Gumtree has told users that they should never send money to someone they did not know, and to always use common sense.

‘I am not afraid’: The modern unknown soldier risks it all in Ukraine
Greens sign up for Labor’s looming jobs-and-skills summit as Liberals stick with boycott
Joe Biden’s $430b green victory for the environment
China cementing its Thailand ties with joint military exercises
NRL: Titans frantic to end 10-game losing streak as Manly showdown looms
AFL: Western Bulldogs cling to finals hopes after GWS thriller
Decluttering can mean finding something precious: Yourself
Today's Stories