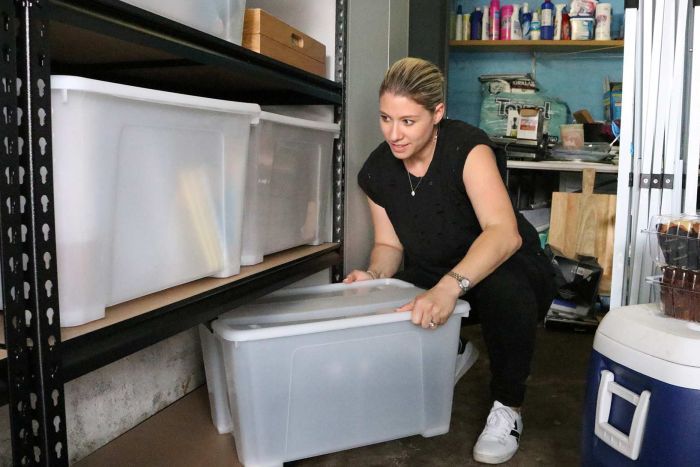 Some might say that Susanne Thiebe has a strange idea of thrills.

“Decluttering is thrilling, it’s the best. I find getting stuff out of people’s homes thrilling,” Ms Thiebe said.

More than most, Ms Thiebe has a reason to be excited by decluttering: she is a professional organiser in Sydney.

Minimalism is having a moment right now, as is the advice of tidying celebrities like Marie Kondo, whose trademarked KonMari tidying method has its own Netflix special and New York Times best-selling book.

But what is less clear is whether many people actually understand what a professional organiser does.

Peter Walsh is Oprah Winfrey’s ‘get your life organised’ guy. In some ways you might say he’s the original declutterer.

At the very least, Mr Walsh has helped take the profession mainstream. But even he sometimes gets puzzled looks.

I’m aware of the fact that, many people see what I do as glorified cleaning,” he said.

“And nothing could be farther from the truth.”

As Mr Walsh and others would attest, there’s much more to being a professional organiser than throwing a bin on the floor and sorting everything into ‘keep’ or ‘discard’.

What does a professional organiser do?

It goes without saying that not everyone can afford their own organiser, someone who typically comes for multiple-hour sessions over the course of a few weeks.

Most people will have to put up with the messy bathroom, the overflowing drawers, until they figure out some sort of hack or coping mechanism.

But for those who can afford one, an organiser chiefly provides an outside voice and perspective that helps them not just tidy their homes, and introduce systems and practices to stop clutter accumulating in the future.

This is how Lissanne Oliver, who has been organising since 2002, sees her role.

Professional organisers like Ms Thiebe see themselves as trained specialists helping people create order in their own lives.

“I work with people who can’t walk in some of their rooms, or elderly people who bump into stuff constantly,'” Ms Thiebe said of a typical client.

“They tried organising, they read books, or they go on Pinterest or the wrong Facebook groups, but then they realise, ‘I just need less shit’.”

Most of Mr Walsh’s work is over two days, when he is invited into their homes and goes through their stuff.

“I use two things when I help people,” he said.

“One is a helping hand. If you want help, I will do whatever is needed to help you.

“And the other is I hold up a mirror to people and will ask questions.

“And I have found that as long as I am honest, if people believe I am honest, I can say pretty much anything.”

The rise of the profession, at least in Peter Walsh’s experience, has moved in sync with the rise in a consumer society and an increase in the “It’s the evolution of our relationship to our stuff.”amount of stuff we own.

Nearly half (44 per cent) of women told the ABC Australia Talks National Survey they’d be happier if they spent less time running errands and doing chores — notably higher than the 32 per cent of men who said the same.

“I think everyone has been struggling with clutter for a long time now,” he said.

“From excess consumption came the concept of decluttering and organising and from that came minimalism.

It’s the evolution of our relationship to our stuff.”

The changing and varied stuff in the typical home means that most professional organisers offer a range of services.

Often they’ll focus just on one room, or one problem, and work to disentangle the problem from there.

“I call myself a professional organiser, but I’m more and more saying I’m a ‘declutter coach,'” she said.

“Because if you don’t declutter, if you just organise it’s going from A to B and making it more pretty.”

Working with the person, not their stuff

Often, it very quickly becomes obvious that problems with clutter are unrelated to being just about their stuff, Mr Walsh said.

“I’d like to think that what I do does have an effect on people’s lives,” he said.

“But it forces people to look at their stuff and the relationships, the way they live, their perceptions of things in a very different way.

That’s more about quality of life than it is about quantity of stuff.”

Mr Walsh said his clearest example of this was when he worked with a client who had every single piece of baby clothing from her teenage boys stacked in the master bedroom, and wanted it organised.

“So after about 20 minutes talking about this, I said to the mum, ‘Look, I just have one question for you: do you think your best life with your boys is in front of you or behind you?” he said.

“She started sobbing and it turned out she had always wanted to have more children.

“And so if you or I looked at those baby clothes, or if her husband looked through those clothes, all we would see were baby clothes.

“When she looked at them what she saw was… her contribution as a woman, as a mother, as a wife.

Tidying up the baby clothes ended up being more about moving on from her feeling of loss and communicating that to her husband, Mr Walsh said.

“She ended up donating all of those clothes to the woman who was adopting … a couple of babies from China,” he said.

“[It shows] we all get focused on the stuff, but it’s never just about the stuff.”

Decluttering can mean finding something precious: Yourself