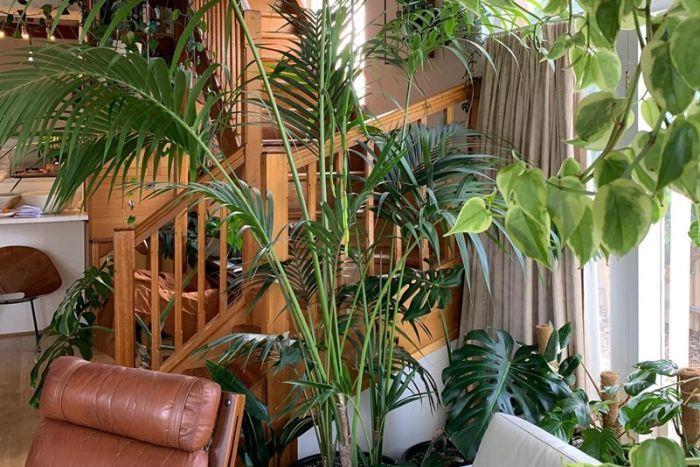 Homemakers are going crazy for indoor plants and the social media-driven trend is inspiring home-based businesses and promoting wellbeing.

It is being described as an addiction, with devotees starting with one plant in their home and ending up with hundreds.

Some are even naming their plants and say they bring companionship.

They post pictures of their plants, especially any new foliage, announce when new varieties hit their local stores, and seek support when their babies are wilting.

Ms Robertshaw said the craze was embracing all ages and demographics, and showing no signs of dwindling.

“It’s really therapeutic to care about the needs of a plant … it’s like having pets,” Ms Robertshaw said.

“It’s a really lovely thing to look at in your home.”

Ms Robertshaw opened her own plant shop in Victor Harbor, SA, after being made redundant from her office job.

“I name all the plants in store, and make up ridiculous stories about them on social media,” she said.

Along with the return to indoor plants she has seen home owners embrace natural fibres, showcasing their plants in macrame hangers, kokedamas (moss balls tied with string) or woven baskets.

“All of that has come back in. There’s a real theme of wanting to have nature around you, especially with high-density living or for people who are renting,” Ms Robertshaw said.

In SA’s Riverland region, indoor-plant lovers are making and selling their own kokedamas and offering workshops to others wanting their own indoor jungle.

Others are setting up their own plant nurseries and propagating plants for sale.

Being mindful and connecting with nature

Jo Greathead is a busy mum of two and a professional counsellor.

Her passion for plants began about two years ago and she has since filled her home with greenery including Monsteras, a climbing ivy above her fish tank, large palms and fiddle leaf figs and hardy Zanzibars.

“Once you have one plant and you experience the joy as it grows and the joy it brings when it’s thriving, it’s kind of an addictive feeling,” Ms Greathead said.

“I think it’s such a big craze because people are tapping into nature more and enjoying the benefits.”

She started making kokedamas and quickly found a market for them, selling them privately and through a local nursery.

“I had about 16 in the house and my husband encouraged me to start selling them,” she said with a laugh.

“A little side business came of it, completely unintentionally, but they just sell so easily.

“I find it a really fantastic way to ground myself and become mindful, getting my hands in the soil and connecting to the earth and the plants.”

‘Everyone can do it, whether eight or 80’

A kokedama workshop hosted by another enthusiast, retired florist Ann Berriman, attracted mothers and daughters keen to spend some quality time together.

Student Chelsea wanted some more plants to take with her to boarding school and attended the workshop with her mum Sandy.

“I’ve seen them [kokedamas] around, I thought, ‘How do they do that?’. It looks so hard, but it’s so easy,” Chelsea said.

She said when students at her boarding school went home for holidays, all their plants were relocated to staff rooms for watering.

“Everyone has names for them. If you don’t name your plant, you haven’t really bonded,” she said.

For Ms Berriman, teaching others to make kokedamas was a rewarding way to share a love of the ornamental plants.

“It’s a form of Japanese bonsai. Because you’re enclosing the roots … they won’t grow as large as they would if they weren’t all bound up,” Ms Berriman said.

“Everyone can do it, whether they are eight or 80, as long as you can wrap string around a parcel, it’s the same principle.”

Ms Robertshaw said indoor plants had become readily available at hardware stores, nurseries and even online and that an increasing variety of plants were now available in Australia.

“The growers and wholesalers are realising what the capacity of the plant craze is,” she said.

Rarer varieties, known as “plant unicorns”, such as the variegated Monstera Thai Constellation, are selling online for $300 for a small plant and pot, and more mature ones can cost a lot more.

“There’s a lot of more unusual plants arriving in Australia, variegated plants that are becoming more popular and people are buying humidifiers so they can keep them alive and flourishing,” Ms Robertshaw said.

But before you fork out that sort of money, get your green thumbs working on the more common household plants.

And beware of the biggest pitfall – overwatering.