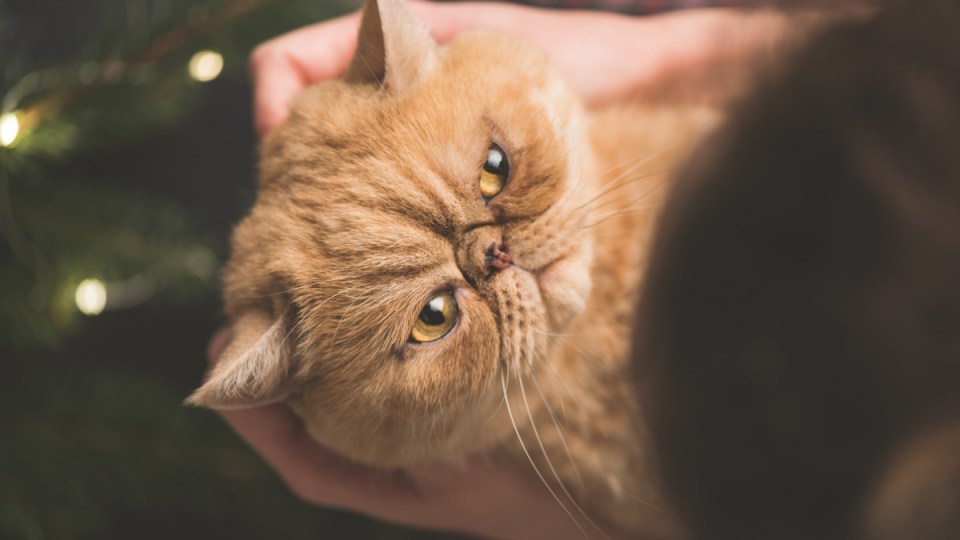 We might've been wrong about cats all along. New research suggests they do have some positive feelings towards some people. Photo: Getty

In the perennial battle over dogs and cats, there’s a clear public relations winner.

Our relationship with cats, on the other hand, is often described as more transactional. Aloof, mysterious and independent, cats are with us only because we feed them.

On Monday, researchers reported that cats are just as strongly bonded to us as dogs or infants, vindicating cat lovers across the land.

“I get that a lot – ‘Well, I knew that, I know that cats like to interact with me,’” said Kristyn Vitale, an animal behaviour scientist at Oregon State University and lead author of the new study, published in Current Biology.

“But in science, you don’t know that until you test it.”

Research into cat behaviour has lagged that into dogs. Cats are not social animals, many scientists assumed – and not as easy to work with.

But recent studies have begun to plumb the depth of cats’ social lives.

“This idea that cats don’t really care about people or respond to them isn’t holding up,” Dr Vitale said.

In a study in 2017, Dr Vitale and her colleagues found that the majority of cats prefer interacting with a person over eating or playing with a toy.

In a 2019 study, the researchers found that cats adjust their behaviour according to how much attention a person gives them.

Other researchers have found that cats are sensitive to human emotion and mood, and that cats know their names.

Scientists had arrived at conflicting findings about whether cats form attachments to their owners, so Dr Vitale and her colleagues designed a study to more explicitly test the hypothesis.

They recruited owners of 79 kittens and 38 adult cats to participate in a “secure base test,” an experiment commonly used to measure bonds that dogs and primates form with caretakers.

A similar test is also used for human infants. It is based on the theory that infants form an innate bond with caretakers that manifests as a strong desire to be near that person.

In the experiment, which lasted six minutes, cat and kitten owners entered an unfamiliar room with their animals.

After two minutes, the owner left the room, leaving the cat or kitten alone – a potentially stressful experience for the animal. When the owner returned two minutes later, the researchers observed the feline’s response.

About two-thirds of cats and kittens came to greet their owners when they returned, and then went back to exploring the room, periodically returning to their owners.

These animals, the researchers concluded, were securely attached to their owners, meaning they viewed them as a safe base in an unfamiliar situation.

“This may be an adaptation of the bond they would have with their parents when they were young,” Dr Vitale said.

This behaviour, she added, may mean: “Everything’s OK. My owner’s back, I feel comforted and reassured, and now I can go back to exploring.”

About 35 per cent of cats and kittens displayed insecure attachment: They avoided their owners, or clung to them when they came back into the room. This does not mean that these pets have a bad relationship with their owners, Dr Vitale said, but rather that they do not see their owners as a source of security and stress relief.

The findings mirror those found in studies of dogs and human children.

In humans, 65 per cent of infants display secure attachment to their caretakers, as do 58 per cent of dogs.

“This result suggests a similarity in sociality in humans and companion animals,” said Atsuko Saito, a behavioural scientist at Sophia University in Tokyo, who was not involved in the new research.

“Investigating this phenomenon will help us better understand the evolution of sociality in animals, including us.”

After the first round of tests, the researchers enrolled half the kittens used in the study in a training and socialisation course. The other half served as a control group.

“Cats are so aloof! They don’t show affection!” 😐 pic.twitter.com/RartMDL0GQ

One day a week for six weeks, kittens played with one another and were trained to sit, stay and do tricks.

When the course was complete, the researchers repeated the secure base test with the kittens.

They found the same results, meaning the training did not have an effect on kittens’ attachment behaviour toward their owners. This indicates that once a cat forms a bond, it seems to remain stable over time, Dr Vitale said.

In cats – as in infants and dogs – researchers still do not know all of the factors that shape the caretaker relationship, but it’s likely a complex mix of genetics, personality and experience.

It is possible that even more cats are securely bonded to their owners than the new study found, said Mikel Delgado, an animal behaviour researcher at the University of California, Davis, who was not involved in the research.

Unlike dogs and infants, many cats spend nearly all of their time inside, so being in a new environment can be a foreign and frightening experience, Dr Delgado said.

For some cats, a fearful response to a stressful situation may take precedence over a secure bond with an owner, so the study results may not fully capture the attachments of some cats.

Testing cats’ responses to strangers, rather than to just their owners, might reveal whether cats are truly bonded to a specific person or are sociable toward humans in general, Dr Delgado added.

Dr Vitale and her colleagues plan to delve more deeply into cats’ relationships with people, and to test whether specific interventions can help shelter cats form early bonds that help them feel more secure and get adopted more quickly.

“The more we find out about cats, the more we’re seeing that they are social creatures and that social bonds are really important for them,” she said.