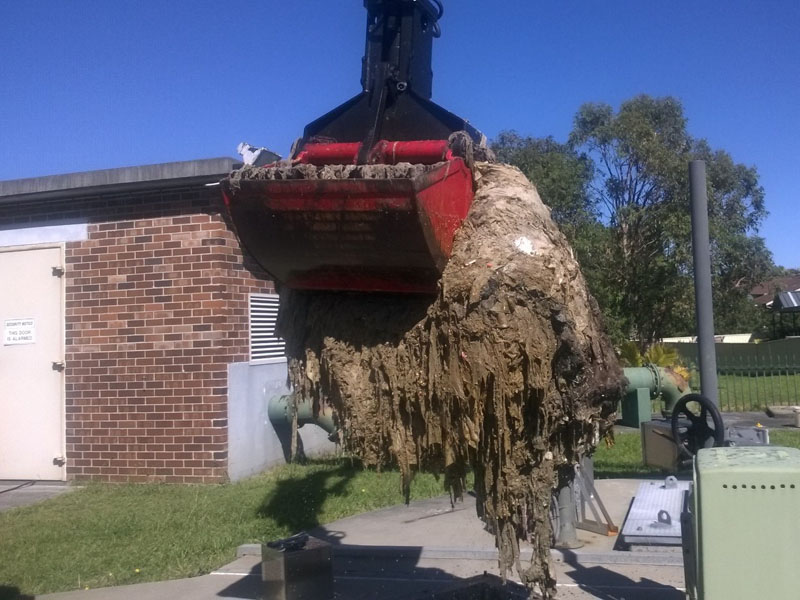 Enormous balls of cleaning wipes labeled as ‘flushable’ are clogging up Australian sewers and waterways, with some people forking out up to $16,000 to have their pipes unclogged, a water expert said.

Water authorities across the country are warning customers about the dangers of flushing these products down the toilet, with giant clumps of wet wipes – known as ‘fatbergs’ – posing a health hazard.

Sydney Water spokesperson Kieran Smith told The New Daily that their authority alone was removing 500 tonnes of wet wipes from the city’s sewerage systems each year – at a cost of $8 million.

These ‘fatbergs’ were formed when the wet wipes mixed with fats, oils and greases in the pipes to create an enormous ball, he said.

“We are yet to find a wet wipe labelled as ‘flushable’ that actually does break down,” Mr Smith said.

“We have tested wipes against toilet paper and the wipes can last for days with no real damage, in fact you could use them again if you wanted to.

“Where a blockage occurs, the sewerage has to go somewhere, so it can cause an overflow which can go into rivers and creeks and back into customer’s homes up the toilet – no one really wants that.

“There are certainly some health concerns with anything to do with raw sewerage.”

A spokeswoman from Kleenex’s parent company, Kimberly-Clark, told The New Daily that the company’s internal research suggested that only 9 per cent of wet wipe blockages were caused by the “flushable” variety of wipes.

She could not answer how long it took for these “flushable” wipes to break down.

“We are aware of some of the concerns that the wider community has shared and we are continuously working with the water authorities and industry groups to better understand clogging and sewerage blockage,” the spokesperson said.

Sydney Water research suggested men aged between 15 to 44 were the main culprits for using “flushable” wipes and putting them down the loo. Keep wipes out of your pipes

A growing build-up of unwanted wet wipes caused Sydney Water to launch a nationwide campaign with the hashtag #KeepWipesOutOfPipes in 2015 to educate consumers about this costly problem.

CHOICE and Sydney Water teamed up to put ‘flushable’ wipes to the test (video below), which found flushable cleaning cloths and toilet wipes can hold together for days with no evident damage to the materials, while toilet paper dissolved within a few minutes.

In 2015, consumer advocacy group CHOICE awarded Kleenex a ‘Shonky Award’ for its claim that its “flushable” wipes disintegrate like toilet paper.

CHOICE spokesperson Tom Godfrey told The New Daily: “Kleenex was doing the wrong thing by its customers in its claim that the wipes are flushable and they need to be interrogated because we think people are clearly being misled.

“It was a very clever marketing ploy by Kleenex trying to get you to use toilet paper as well as wipes, a pretty cynical marketing exercise to get us to spend more with them.”

‘Fatbergs’ taking over the world … for now

Mr Smith said the campaign involved several water authorities from across the country informing the “big brands” who produced these ‘flushable’ wipes about the increasing impacts and dangers.

He told The New Daily they were working to amend the current international standard for flushability and come to an agreed test between water utilities and the manufacturer on what can be regarded as flushable, which was still a few years away.

Australia would then mirror those standards, he said.

Mr Smith said the Kleenex wipes were made from a mixture of synthetic and natural fibres.

Meanwhile, the most famous fatberg was caught in a London sewerage system and was reportedly the size of a double decker bus.

In the US, the problem was so huge that the Federal Trade Commission had stepped in and put an onus on the manufacturer to prove its products were flushable before being labeled so.

Watch the video by CHOICE, which tested the breakdown of Kleenex flushable wipes against Kleenex toilet paper. Flushing these down the toilet could cost you $16k