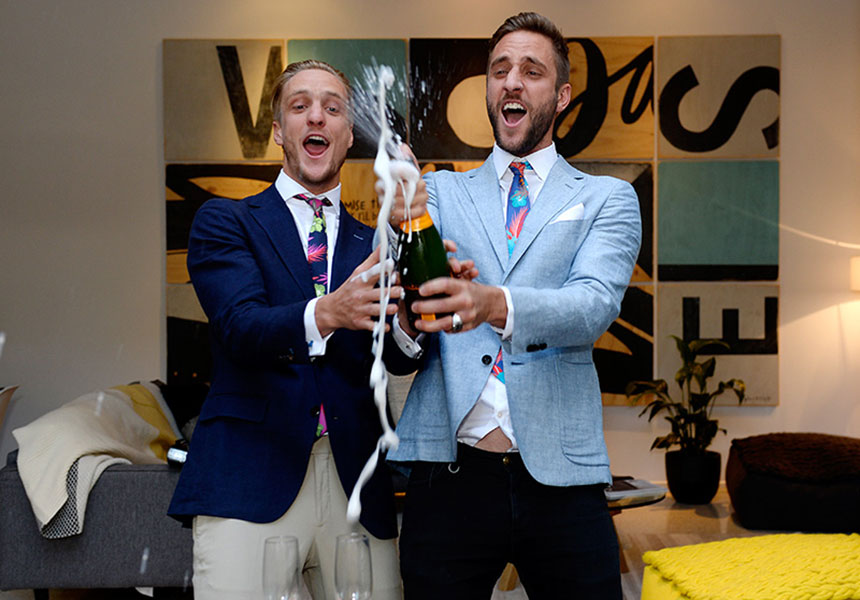 The gut-wrenching finale of The Block Glasshouse might have made for riveting television, but it cause real-life heartache for the three couples whose auctions were largely unsuccessful.

Achieving the highest sale price of $1.9 million, brothers Shannon and Simon were elated to not only land the highest profit of $335,000 but also the $100,000 prize money.

• How to improve the value of your home for $1000
• The Block victims ‘shouldn’t be compensated’
• Block breakdown: contestants fuming after disaster finale

Runners up Chris and Jenna also finished the night on a high earning themselves a tidy $310,000 profit. Unfortunately the remaining three couples didn’t share the same fate.

Celebrations came to an abrupt end during the third auction of the night, as couple Maxine and Karstan watched their auctioneer limp in with a sale price to $1.71 million, earning them just $40,000 profit. The devastating trend followed with Darren and Dee and Michael and Carlene each taking home just $10,000 after months of hard work.

Amongst the excitement and devastation, I caught up with Shannon to get the lowdown on their auction, and find out what ‘s next for him and brother Simon. Thank you very much.

And commiserations to an extent I guess …

Yeah it was a very, very weird night.

You guys decided to go second in the auction order for the night. What was that decision based on?

Our real estate agent wanted to go second and we had originally questioned his reasoning but he said “no we want to go second”. And well, it paid off.

And Auctioneer Damien Cooley was a great get.

The first thing we did when we found out we were on The Block was ring up Damien Cooley as we were told by a good friend in real estate to ring him up and get him on board straight away.

He’s a gun, so that was a good choice.

Yes he is a gun and came highly recommended so it was great to lock him down. He then recommended Jellis Craig to be our agent so we went from there. The two of them actually know each other quite well and as Jellis Craig didn’t get the desired outcome on the Richmond series, they were keen to do well this time around. So from there we formed that relationship.

Were they feeling confident throughout your marketing campaign or did they hold any reservations?

No, them and us were always feeling confident. Much of it came down to the reserve … you can have two buyers and a low reserve and smash it. Or you could have 10 buyers and high reserve and be absolutely stuffed – but they just said that would do the best they could. We had plenty of interest in our unit with 12 registered bidders, but we knew that ultimately it would come down to where the reserve was set. You must have been in high spirits and feeling confident going into your auction after Chris and Jenna’s positive result. Talk me through that.

Yeah we were! Chris and Jenna going first was all a little bit scary because they hadn’t done real well throughout the show and perhaps didn’t have the strongest apartment, so for them to go first we felt was a bit of a risk. If they bombed out then we feared the rest of us would too. Also their auction stalled for about 30 seconds right on their reserve and the hammer was literally about to come down so it scared the crap out of all of us.

If he had hit the hammer right on the reserve then they would have won nothing. I don’t know how they were feeling but we all just held our breaths. It was horrible. But then their auction took off and well, that’s what we had all wanted, a strong start to the auction.

Next up was us, and we did so well and were thrilled and honestly thought that Max and Karstan were going to kill it. But for some reason, the wheels just fell off. We just don’t know what happened.

Going into Max and Karstan’s auction, I guess everyone would have been feeling fairly confident?

It was ridiculous … sure they had a bigger reserve than us but only by $100,000. They had a bigger apartment, northerly aspect and another bedroom so to me the reserve didn’t look like it was too much bigger than ours. We figured everyone who missed out on ours would be keen to bid for theirs, especially as it was the last of the bigger units. We expected them to come out and smash it … but yeah it was just so slow and they literally only just got past their reserve. It was such a let down and was horrible to watch. We all felt so bad for them because above winning, we just wanted everyone to do really well. Dan and I have always felt the competitiveness fade quite quickly in the moments leading up to the auction and you have genuine feelings of wanting everyone to do really well. Did you guys feel that way too?

Yeah that’s right … after they came in poor Max was in tears and Karstan was just angry and it literally felt like we had been to a wedding and then straight to a funeral. Two extremes! It was the quietest and most devastating silence. It’s not like we could say “oh sorry man, better luck next year”, I mean who would want to do that again?! We were happy that we were in front but at the same time it was hard to see our good mates not being compensated for all their hard work.

On the back of the Fans v Faves auction results you must have been thinking you were pretty safe. Did you always believe you were going to do well?

Well we didn’t think we were going to make $800,000 but we all thought we were going to do really well. Even when our auction finished and we pocketed $335,000 we looked at each other and were so stoked but both said that it wouldn’t be enough to win it. There was almost a bit of momentum going and then nothing. And then Dee and Daz only made $10,000 and then straight onto Michael and Carlene who made the same. Their auction pretty much stopped before their reserve so they were literally pulling money out of whatever bidders there were in the room to even make a $10,000 profit. When Carlene came back after their auction I gave her a hug and just lost it, it was horrible.

Do you think it would have been better to perhaps let them pass the property in?

Well that’s what we were saying. We were actually screaming at the TV saying “turn it in, turn it in” so that they could have another month on the market and then do as good as they possibly can. But I guess the bids were there and they had to take it.

Gosh, it’s such a shame for them… everyone produced such a great product. On a lighter note though, you guys must be stoked. How is your family feeling about it all?

Oh mum and dad and our two sisters all came down for it and were just over the moon. We almost made half a million bucks!! That is huge so they were ridiculously happy.

So what is next for you guys, are you just going to continue to build your business Vos Creative Services?

We have a few things in the pipeline. There are actually a few designers that want us to work for them, which is great. So we just need to go home and sift through whatever offers there are on the table and determine what is going to be best for us. We will just chill out for the next week or so and then get home and then figure things out from there. I definitely want to continue with interior design though.

And what about your new wife … will you take her on a nice honeymoon?

Well she’s actually a teacher so she doesn’t get holidays outside of school holidays. We took a quick trip to Bali after we got married, as I didn’t know how busy we would be after the show and we had a spare week so thought, “let’s go”. But yeah we will take a nice big holiday at Christmas time.

How about your tradies, will you put on a bit of a barbecue for them do you think?

Yes for sure. About 90 per cent of our tradies come from Geelong so we will hopefully head down there in a few weeks and put on a few cartons and a barbecue and we are taking our builder overseas on a trip. He has worked himself into a grave for us so we are going to take him on a surf trip to Indov… and it’s a good excuse for us to head over as well.

The Block will be back on our TV screens in early 2015.

A version of this article first appeared in The Home Journal.

Shannon from The Block: ‘The wheels just fell off’