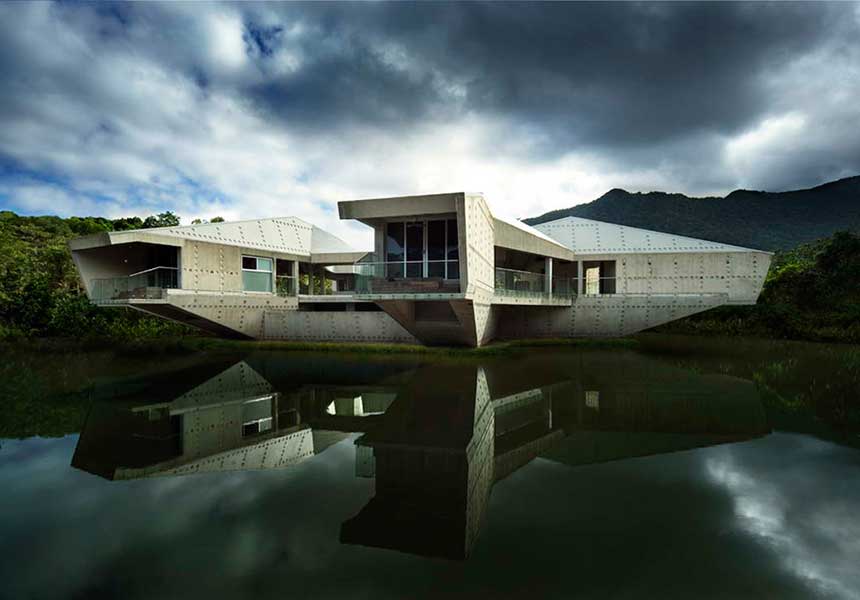 Many of us have romantic notions of the beach house: towels draped over deck chairs, paint flaking off weatherboards, frayed Seagrass matting and a collection of mismatched furniture. The great Australian beach house is simple, casual and social.

Well, not all of them. Check out The Home Journal‘s picks for the best modern beach houses in Australia. Clare Cousins Architects have extended a family house in Mornington Peninsula on the Victorian coast by adding a timber-framed guest house that is raised up on stilts. Cousins was asked to add new living rooms and an extra bedroom to the single-storey beach house so rather than demolish or renovate the existing building, her approach was to keep the building intact and design a new pavilion that sits adjacent. Cousins describes the house as ‘a self-contained, timber-clad treehouse… added to an original merchant builder’s home to elevate its owners’ daily lives both literally and metaphorically…’ and we think it both clever, liveable and very considered. John Wardle has enjoyed great success as an architect and with his Fairhaven Beach House, he has adapted the core tenants of his design philosophy to create a stunning holiday home. The house perches high on top of a ridge line, and enjoys panoramic views over the southern ocean and surf beach below. The building uses zinc, which clads the exterior in large angular volumes that wrap and embrace a central courtyard, and large picture windows. The internal material uses wood as the dominant material which adds to the warmth and interest. Croft House, by Sydney architect James Stockwell, attempts to be a part of the natural systems of wind, rain and sun: by working with the elements. The design explores the concept of shelter in an exposed environment. It adopts the rural language of corrugated metal and illustrates the suitability of local, low-embodied energy materials in contemporary architecture. The palette of grey metal and concrete blends with the muted shale geology. The house’s protective exterior is warmed by compressed sand walls; a fragment of distant sand dunes. The interior’s structure and joinery are constructed of local Victorian ash timber. Running costs are minimised by passive solar design. This house is perhaps my most contentious inclusion: firstly, it is not exactly a beach house; and secondly, it looks a bit like a storage bunker in East Germany. The house is by Charles Wright Architects is located in Far North Queensland and the architects spent a great deal of time in the planning phase and had to collaborate extensively with various state agencies to get the approval for construction in such an environmentally sensitive wetland area. The house is unique because it uses precast concrete and is engineered to withstand the extreme climatic conditions that are common so far north. If the house leaves you a little uninspired with is overall silhouette, the undercroft vault area is so beautiful and sculptural that you should reconsider. For sheer accolades, this house by McBride Charles Ryan trumps the lot. Winning the 2009 World Architecture Festival’s ‘World’s Best House’, and the 2010 Grand Designs ‘Best International Home’, the house is located amongst the Tea trees in Rye’s back beach. The house’s design is highly complex and its geometry serves primarily to address the topography of the site and the scale of its public access. The internals of the space are subservient to this overarching philosophy and, as a result, lack a degree of domestic scale. That aside, the house is a stand-out example of contemporary housing design in Australia.

This article first appeared in The Home Journal.

The most amazing Aussie beach houses