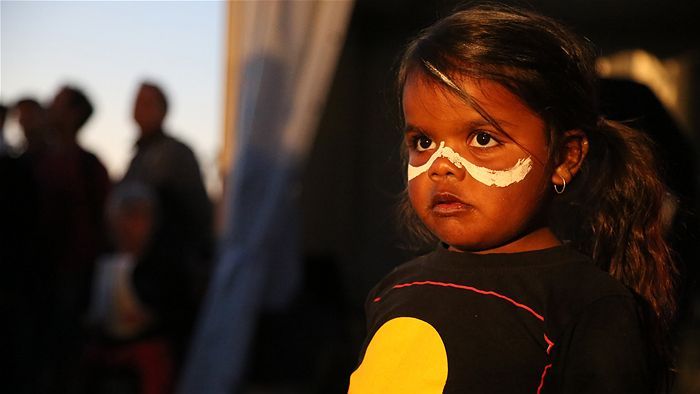 Kirby Barker knows that racism is learned, but she counters that by teaching preschoolers to be kind.

“No one is born full of hate,” she said.

“So it’s really important for adults to set a great example and show love, kindness and respect to anyone you encounter through your life.”

Kirby, 25, is a Bandjalang woman and early childhood educator dedicated to encouraging reconciliation in children under five.

She works at a preschool at Woodburn, northern New South Wales, where she teaches Bandjalang language and runs a bush classroom to help students connect to country.

For grown-ups in their life, the key is to talk about diversity as a positive.

“I say things like we’re all a little bit different,” Kirby said.

She says it’s also important to explain there is diversity within Indigenous Australia.

“The Aboriginal countries map of Australia is a great place to start to open that conversation that we’re not just one type of people,” Kirby said.

“And it’s important to know that if you speak to one Aboriginal person they don’t speak for all Aboriginal people.”

Talk about and meet traditional owners

Kirby encourages the use of the term ‘traditional owners’ – that’s how she describes herself and her family’s relationship to the land she lives on.

She says if you want to break down what that means to little kids, you can say:

The best thing you can do is meet some of the traditional owners in your region and ask them about their connection to country.

“Ask who their mob is, or what their background is,” Kirby said.

“Sometimes you have to be a bit more sensitive as some people might not know where they’re from due to the Stolen Generations, so it’s always important not to be too pushy if they don’t want to tell you.

“But, most of the time, Aboriginal people are happy to share their stories and want people to hear them. They’re stories that have been told for thousands of years and they deserve to be heard. So don’t be afraid.”

Kirby says racism is a strong word to use around preschoolers, but they will sense sorrow and injustice.

When talking about the need for reconciliation, Kirby says we should be honest.

“We can start when children are young to teach the truth about the history of Australia,” she said.

“You can say: ‘Many years ago, before you were born, the government at the time took away Aboriginal children and some of them never made it back to their families and it’s caused a lot of sadness’.

“Think about the feeling behind your words. Take time to sit with it.

“It can be uncomfortable, but it’s important to talk about because we never want something like that to happen again.”

Kirby says there are plenty of resources like books, videos and podcasts based on Dreaming and Indigenous creation stories that carers can share with children.

Kirby also suggests making an effort to learn some of the Indigenous language from your area.

If you don’t know how to do that, your local schools, neighbourhood centres or land councils may be able to point you in the right direction.

“Learning language is a way of connecting to land and community, and it can make local Aboriginal people feel really comfortable and welcomed in their community,” Kirby said.

“Even if people just pick up a couple of words here and there, it’s a great way to get to know people and also to keep those languages alive.”

Ask yourself: ‘How would I feel?’

“Treat everyone how you would like to be treated,” she said.

“Put yourself in someone else’s shoes and think about what would make you feel comfortable or uncomfortable.

“It’s all about establishing trust and building relationships.”

How to raise culturally aware children