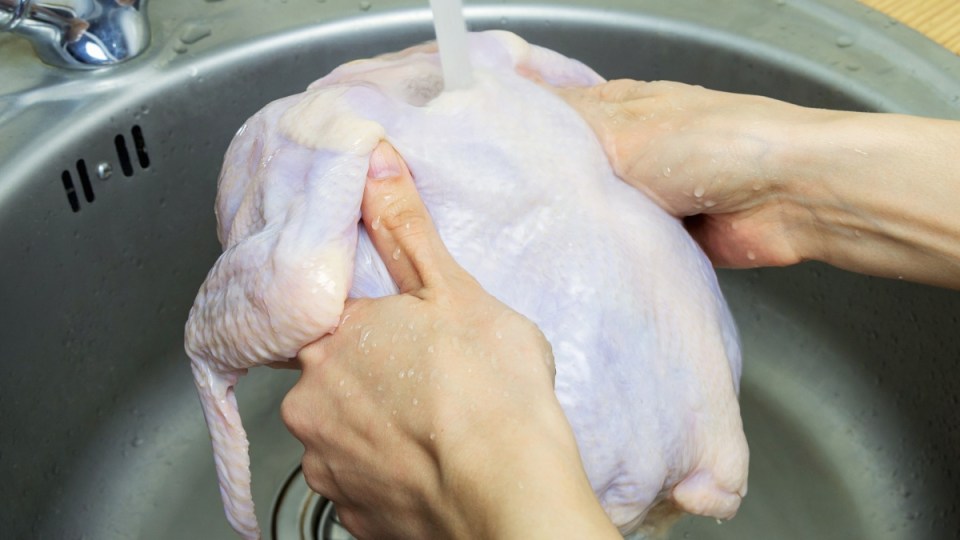 If you really must wash your raw chicken, don't do it under a running tap. Photo: Getty

About half of Australian cooks are still washing their raw chicken despite long-standing public health advice, according to a consumer survey from the Food Safety Information Council.

A survey 10 years ago found 60 per cent of cooks were washing their chicken before cooking them.

At this rate, we’ll have abandoned this dirty little habit by 2072.

The problem with washing raw chicken is it spreads salmonella and other bacteria to kitchen surfaces and other foods you’re not intending to cook, such as salads.

People tend to wash their chicken because it’s slimy, and because they think it will get rid of illness-causing salmonella.

Washing isn’t necessary because cooking the chicken properly kills any bacteria in the meat.

Use a food thermometer if you need to be sure the bugs are dead.

If you must wash chicken, keep this in mind

With 70 per cent of US households enslaved by chicken-washing, US mathematicians conducted experiments that led them to recommend “how to do it safely, or more carefully”.

In their study, the researchers, from Montana State University, assumed that most people wash their chicken under a running tap, which is a great way to spread germs because of the splash effect.

They found that if the chicken was held 40 centimetres below the running water, the bacteria travelled further than if it was held 15 centimetres beneath the tap.

Specifically, at 40 centimetres, water droplets sprayed more than 22 centimetres upward and outward through the air, causing a large spread of infection.

At 15 centimetres, the splash was only about five centimetres high, markedly reducing contamination.

The researchers also advised that turning the tap on slowly reduced a violent burst of contamination.

All of which isn’t rocket science.

What about forgetting the running tap?

It’s a waste of water for one thing.

Instead, half fill a large bowl with salt water or brine and gently rub the damn chicken until the sliminess has gone. No splashing.

To make a basic brine, add one tablespoon of salt for every cup of water you use and mix until the salt is completely dissolved.

This may not kill all the germs, but you might sleep better and besides, brine helps chicken skin go nice and crispy.

Otherwise, just stick the bird in the oven and cook the hell out of it.