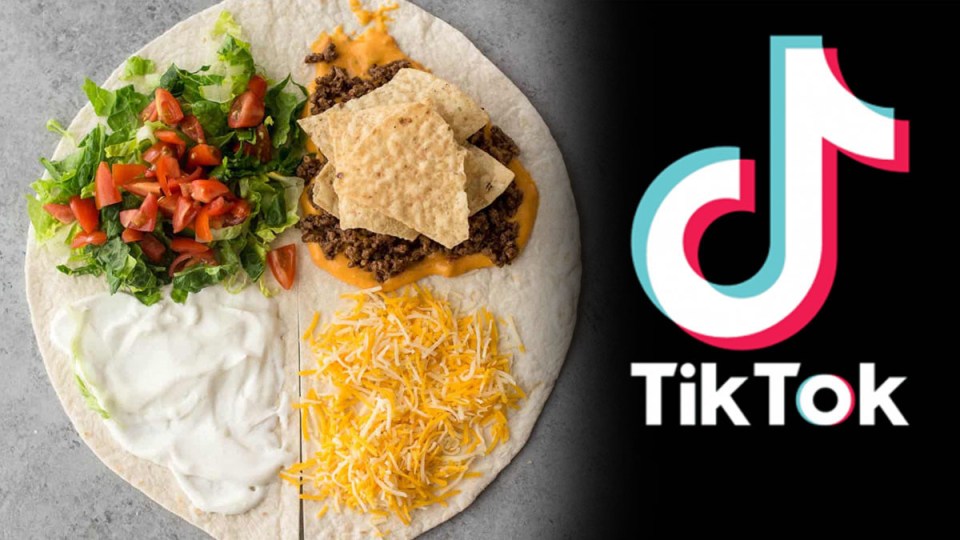 A viral TikTok food hack is changing the way people are folding their wraps – and it’s making cooking more accessible to even the most culinarily challenged.

After a year spent indoors without the luxury of dining at our favourite restaurants, many of us have become somewhat accustomed to the monotony of our own cooking.

Sure, we all started strong with sourdough (or damper), but pretty soon  found ourselves in a toxic cycle of spaghetti bolognese three nights a week.

But the internet has now blessed us with a game-changing tortilla-wrapping technique that has revolutionised the lunch scene.

Rather than messing around trying to roll up your wrap (you just know the ingredients are going to fall out the bottom and end up all over your white shirt), you simply cut straight to the centre of the tortilla from the outside and place different ingredients in each quarter of the circle.

Then fold each quarter over the next one and place it in a fry pan or sandwich press.

“It’s crazy that something so simple is encouraging people that might not otherwise cook for themselves to try it out,” Ms Zaslavsky told The New Daily.

“I think that’s what I like about these food hacks, even though some of them can be quite gimmicky, whatever it is that gets people into the kitchen and makes them feel like this is a space they want to have fun and play in is A-OK by me.”

Robbie Bell, a TikTok chef known by nearly half a million followers as RobbieBell8, agreed that viral social media food hacks gave ordinary people opportunities to grow their skills in the kitchen.

“It’s giving the actual boots-on-the-ground chef the opportunity to build himself a profile.

“When it was just like ABC or SBS, they’ve got their favourites … and they’re building a brand around them. Now, I can pick up a phone, shoot a one-minute video and get 12 million views.”

An egg sandwich is one of the most straight forward dishes to make, but a viral TikTok introduced internet foodies to a whole new approach.

In this one, rather than toast the bread separately, dip each slice into the egg mixture on your hot pan and put your bread in the pan atop the cooking eggs.

Once the eggs are cooked, flip both slices of bread over at the same time so the eggs are on top and fold into a sandwich. The result: an easy-as-pie french toast omlette sandwich. The clip below demonstrates just how simple it i.

What the egg sandwich hack lacks in presentation, it makes up for in  simplicity – something Ms Zaslavsky and Mr Bell attribute to ‘the TikTok generation’ of foodies.

A semi-sloppy (but delicious) egg sandwich isn’t necessarily something you can expect to see among the beautifully crafted Acai bowls you’re used to on Instagram, and that’s why the TikTok food scene is so popular.

“The TikTok generation is changing the way that they look at food,” Ms Zaslavsky said.

Instagram is about perfect food and really visually appealing images, whereas on TikTok, people are much more drawn to the real.

“From that perspective, TikTok is causing more young people to get cooking, which is really exciting – it’s showing them that cooking is just another DIY skill.”

Extravagant cakes in every shape and size (even toilet paper-inspired) dominated the internet in 2020.

But this year, bakers have managed to one-up themselves with the latest viral trend: the tsunami cake.

Interactive desserts have always been popular, as evidenced by the magic melting chocolate ball trend of yesteryear.

The tsunami cake is a modern twist on the traditional birthday cake, and if executed correctly, can make even the most average baker look like a pro.

In this hack, instead of covering your cake with a layer of icing, add cornstarch and milk to make a runnier consistency.

Using a plastic tube to contain it, pour your runny icing onto the top of your cake until you’re ready to make the magic happen.

And while the tsunami cake is probably more of a gimmick than a hack, it still gets people excited about being in the kitchen.

“I don’t know if the [tsunami cake] would work, but it looks crazy.”