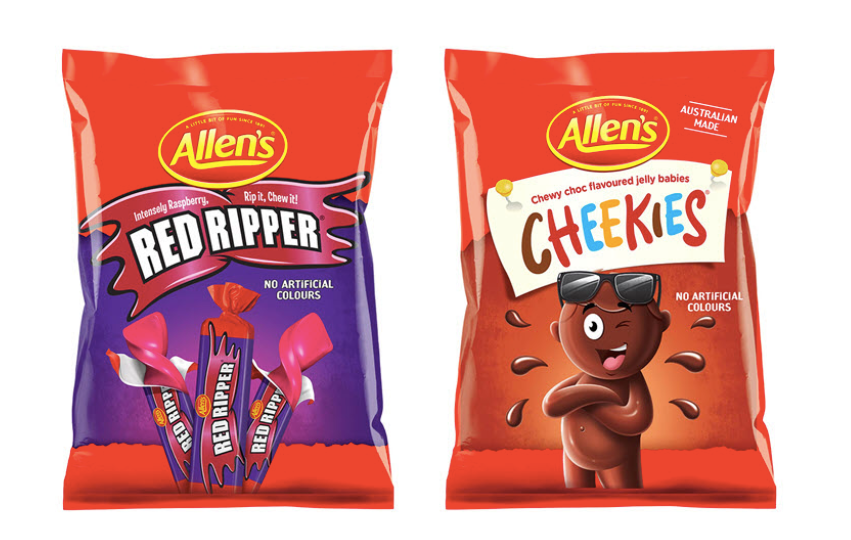 Red Skins and Chicos will now be known as Red Ripper and Cheekies. Photo: Nestlé

The creative team at Nestlé have been hard at work, trying to nail down some new lolly names after the brand announced it would rename two of its classic sweets almost five months ago.

The world’s largest food and beverage company, which owns Allen’s, released a statement in June explaining its decision to rename Red Skins and Chicos.

“These names have overtones which are out of step with Nestlé’s values, which are rooted in respect,” the statement said.

A redskin is a slang term for Native Americans that is widely considered to be offensive.

Chico is the Spanish translation for “boy” and can be offensive to people of Latin-American descent.

The company said at the time it was yet to decide on the new names but promised to “move quickly” to make the change.

The move has not been entirely ‘quick’, as the brand took almost five months to reveal the new names, but finally the moment progressive lolly lovers have been waiting for has arrived.

Nestlé has unveiled the new names: Red Ripper and Cheekies.

Not everyone is pleased with the choice, with some online critics claiming the new monikers also carry unpleasant connotations.

One Twitter user pointed out that ‘Red Ripper’ is the nickname given to a former Soviet serial killer.

Despite almost immediate backlash, the new packaging will hit shelves in early 2021, but the lollies will taste exactly the same.

“Nestle has an unwavering commitment to upholding respect for our friends, neighbours and colleagues,” Mr O’Donnell said.

“We hope Australians will support the evolution of these two much loved lollies – while the names are new, the lollies themselves remain unchanged.

But how will I find them on the shelf?

Don’t worry! The packaging will be kept very similar, with the same colour schemes to catch your eye when searching the lolly aisle.

Mr O’Donnell said changes will be minimal – apart from the names.

“We will keep pack changes simple to help lolly lovers find their favourites easily,” he said.

Nestlé is not alone in seeking to update product names to better reflect a societal push for greater respect, and a distaste for racial stereotyping.

Several food conglomerates and even a football team have rebranded in response to growing backlash triggered by the Black Lives Matter movement earlier this year.

In July, multinational conglomerate Saputo – which owns the Coon cheese brand – said it would ditch the controversial name.

Coon’s manufacturers say the cheese is named after its American creator, Edward William Coon, who patented a method – known as the Cooning process – for maturing cheddar. But the word has long drawn associations in Australia with racist slurs.

Owner Mars Inc announced it would review the name after critics said the image and the term “uncle” evoked servitude and the era of slavery in the US.

What did a football team and a lolly have in common?

Also in July, the US National Football League’s Redskins announced it would be retiring its long-criticised name.

While a name change was welcomed by advocates of Native American people, its rather unimaginative replacement left some fans bemused.

For at least the 2020 season, the team would be known by the surprisingly bland name: Washington Football Team.

The decision to drop the old name came after years of pressure from sponsors – and amid criticism that the term ‘redskins’ and accompanying logo of an Indian chief’s head, is racist to Native American people.

Ripper? The moment ‘lolly lovers’ have been waiting months for