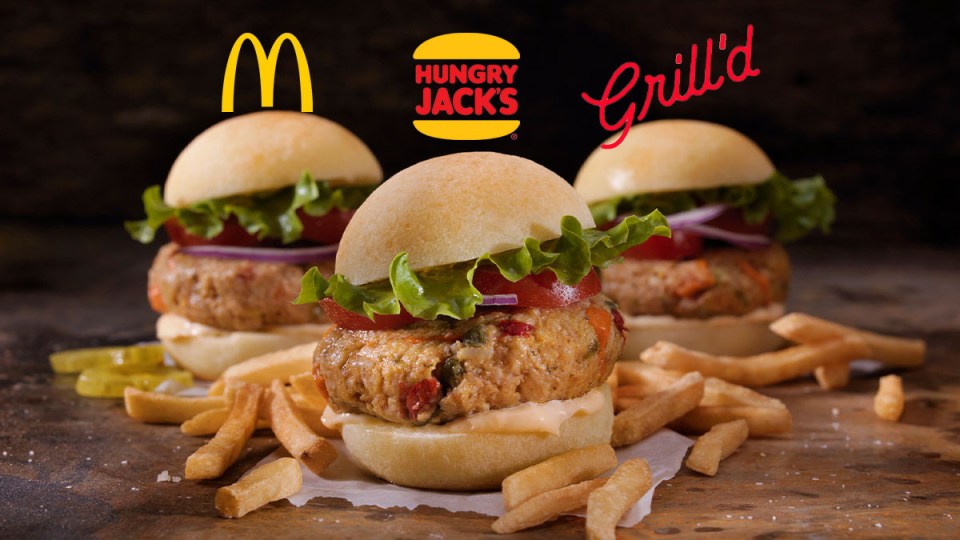 Battle of the burgers: Which mock-meat burger will come out on top? Photo: TND/Getty

McDonald’s is finally dipping a toe into the world of mock-meat by introducing a vegan option with its new McPlant range, but can this late entry hold up against the biggest and best vegan burgers in the game?

The McPlant range will include a fake-beef burger, plant-based chicken and breakfast sandwiches, but don’t get too excited just yet.

A spokesperson for the fast-food giant said it wasn’t able to give an exact launch date for when the range would hit Australian restaurants.

“We don’t have any immediate plans for the McPlant to be launched in Australia,” the McDonald’s Australia spokesperson said.

While most restaurants and cafes have been semi-quick to catch onto the plant-based movement, our fast-food restaurants remained relatively untouched until recently.

If you were an early (pre-2014) convert to the cause, you’ll be familiar with the phrase, “Don’t worry, I’ll just get fries” and will look back aversely to the days of scraping together various side-dishes and calling it a meal.

(Despite what some eateries will have you believe, a side of fries and a garden salad is not a main meal.)

And as the vegan, vegetarian and plant-based lifestyles continue to grow in popularity, our fast-food chains are (finally) starting to take notice – but how do they compare?

Stack up your options…

Accredited dietitian and vegan nutritionist behind The Plant Potential, Mr Jacob McGinness said there are a number of things to look for when picking the best vegan burger.

“Creamy sauces and cheeses can have higher fat and sodium,” Mr McGinness told The New Daily.

Luckily, we compared the best fast-food, mock-meat burgers available so you don’t have to.

Nutrition-wise, things to look out for is sodium content, saturated fat and kilojoules in your burger of choice, Mr McGinness said.

Vegetable patties tend to be lower in total fat and saturated fat, but higher in sodium compared to mock-meat and real meat patties.

For example, the Vegan Whopper Cheese Burger contains two veggie patties instead of the CSIRO-designed mock-meat patty used in the Rebel Whopper.

The Vegan Whopper Cheese only has 5.6g of saturated fat, but 1480mg of sodium which is nearly two thirds of your recommended daily intake.

Unfortunately, while mock-meat patties are delicious and generally full of protein, they also tend to be higher in sodium, saturated fat and kilojoules, even compared to real meat patties.

Mr McGinness said just because something is marketed as vegan doesn’t mean it’s automatically healthier, but ensuring your burger is loaded with vegetables is a good start.

Sadly, when it comes to mock-meat, you’re likely to find yourself picking between high sodium or high saturated fat.

Our verdict? The Rebel Whopper is the way to go – just remember to ask for vegan mayo!

“If you’re going out to get burgers, don’t get all the extras – maybe share fries with friends, and get a water or low-sugar soft drink instead.”

The McDonald’s McPlant range – if we ever get it – will use a Beyond Meat patty, the same or similar to the one used at Grill’d, which will give you an idea of its potential nutritional value.

And while we may have to wait a bit longer than the rest of the world to try the McPlant range, it is certainly a step in the right direction.

Hopefully someday soon the vegans of Australia can hope to participate in the age-old, national past-time of the ‘Maccas run’, and order something other than a side of fries.