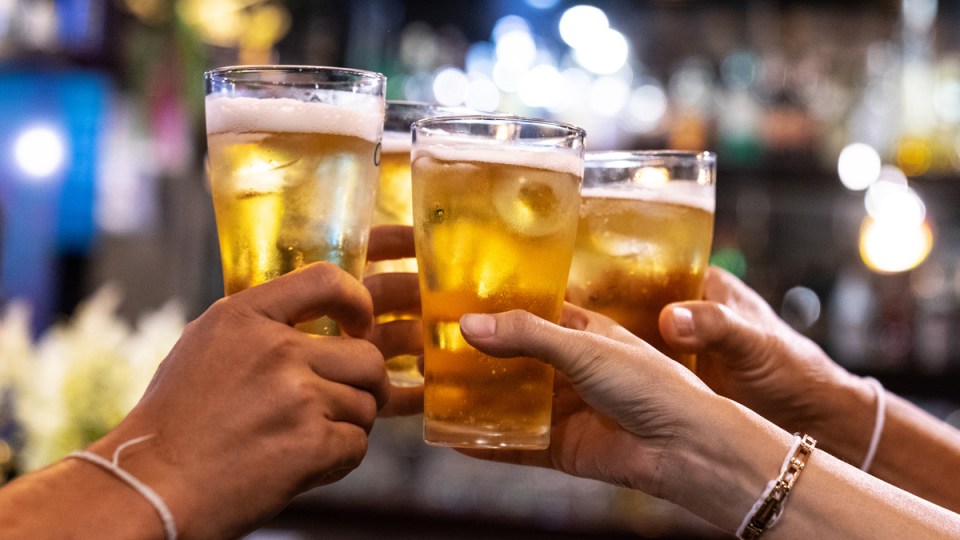 One of these beers is not like the others – it's free from alcohol, a trend taking off across the globe. Photo: Getty

What started as a “self-defence” mechanism is heralding what could be the next wave of on-trend drinking culture for Australia: Alcohol-free beer.

Julian Sanders and Caleb Hogan are two of the folk behind UpFlow, a Melbourne-based brewery that has started pumping out full flavoured but booze-free brews.

The mere mention of light beer – let alone low-alcohol beer – distorts the upper lip of most Australians into a sneer.

It’s a reaction and a challenge the UpFlow crew relish.

“When it gets people riled up, I like it,” Mr Sanders told The New Daily.

“(Zero-alcohol beer) is almost like an affront to them, but the movement of dry drinking and mindful drinking is strong in the UK and it’s getting going in the US.”

In the UK, it’s estimated the no- or low-alcohol beverages sector (cheekily called ‘nolo’) has grown by 30 per cent in four years, and is expected to fetch some $113 million in sales this year.

With more people’s attention turning to their health and alcohol intake – especially during the pandemic – Mr Sanders believes the trend will take over Australia before too long.

Our shopping habits reflect as much: Dan Murphy’s alone has reported the sales of its non-alcoholic drinks have doubled in the past year.

A drink to survive

Most people’s interactions with alcohol-free beer starts in the mixers-soft drink aisle of the supermarket, where a few bottles might be stuffed away on the lowest rung.

The UpFlow team starts at the top. Their “day job” is Spark, a company that purpose-builds breweries and distilleries around the country.

“When you’re making deals with companies to build a still, these guys don’t sign in ink,” Mr Sanders explained.

“They sign in three-day benders. So we started making UpFlow as a self-defence mechanism, so we can still be alert and fresh ready to go at 6am, after staying up all night.”

Mr Sanders and Mr Hogan insist they’re not about shutting down traditional beer as we know it – they just want to create an alternative; something that still tastes great, but can mean the difference between feeling mentally sharp after a night out, or driving home versus taking a taxi.

Mr Hogan said they couldn’t reveal too much about how they create their product, but they custom-built their brewing equipment to achieve the result they wanted.

After a soft launch in the UK, they’ve begun infiltrating Australia with four beers: A session IPA, pale ale, wheat beer and a stout.

(Editor’s note: I can confirm all of these beers do indeed taste like their alcoholic cousins, you’d be hard pressed to spot the difference.)

On July 26, they’re teaming up with other alcohol-free breweries in Australia – Sobah, Coopers and Heaps Normal – for a virtual beer festival.

To register and order tasting packs, visit the site here.

Changing with the unprecedented times

There isn’t anything the pandemic hasn’t affected – not even a stalwart annual fundraiser is safe from the reaches of the coronavirus.

Quarantinis, breakfast beers and bulk-order wine became a coping mechanism for many Australians as the COVID-19 strangled the world as we knew it.

While the overall trend is to drink less, stress and shiraz go hand in hand.

So when July rolled around, many people asked – why would anyone do Dry July in these strange times? There’s so much else going on in the world.

For Dry July Foundation general manager Katie Evans, this made the fundraiser even more pertinent.

Aware of the uphill battle of bringing Australians on board with the campaign when they’ve been locked away from their favourite watering holes for four months, the fundraiser adopted the “even the smallest bit helps” attitude.

This year, participants could subscribe to a dry-ish July – choosing from seven, 14 or 21 days, as well as the full calendar month.

More than 37,000 Australians have taken up the challenge, with about $7 million raised so far.

Donations and registrations continue throughout July and August.