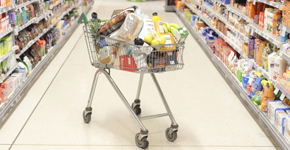 Consumer group Choice has called for the Health Star Rating system to be used for all products, saying people are being tricked by 'healthy' unrated products.

Australians may be getting tricked by the marketing of supposedly healthy products, consumer advocates warn.

When star ratings are present, consumers are far less focused on marketing gimmicks when making their shopping decisions, the group says.

A Choice survey has found just 52 per cent of Australians rely on product packaging when the rating system is present, compared to 75 per cent if it is not shown.

Two-thirds of participating shoppers chose fewer healthy cereals based off the product labelling, for example, with only 37 per cent identifying the healthiest cereal.

Shoppers were also quizzed on their knowledge of products commonly perceived to be healthy.

Without the rating system, 74 per cent of shoppers said one of the products they were shown was healthy but when its rating of 1.5 stars out of five was added, only 41 per cent said it was.

“Too many food brands still try to trick us into buying their unhealthy products with misleading images and claims,” Choice food policy expert Linda Przhedetsky said.

Choice has long been critical of the rating system, saying it sometimes improperly gives healthier ratings to products with high amounts of sugar or salt.