Found in the Top End of Australia, the Kakadu plum has enough nutrients to claim a superfood status. Photo: Getty

The Kakadu plum fruiting season in the Top End is just finishing. Over one weekend, I was able to find a few fruits on the ground beneath some trees in the eucalypt woodland near Darwin.

This is the best way to eat Kakadu plums – fresh, fully ripe and fallen from the tree. The fruit is smooth, fleshy and ovoid in shape with a short beak, and yellow-green or slightly reddish when ripe.

Initially, the taste seems somewhat bland, but with a definite sour and astringent finish.

While that’s probably not a very inspiring description to encourage a tasting, a professional flavour profile describes the taste as “a stewed apple and pear aroma with cooked citrus and a floral-musk note” – so it’s perfect for jam, sauces and relishes.

With small, creamy white flowers in long spikes clustered towards the tips of the branches, the Kakadu plum, Terminalia ferdinandiana, is just one of about 29 species of Terminalia found in Australia.

But the extraordinary properties of the Kakadu plum makes it attractive for a diversity of food, beverage and even cosmetic products. And this demand is creating supply problems as competition to cash in on the fruit increases. 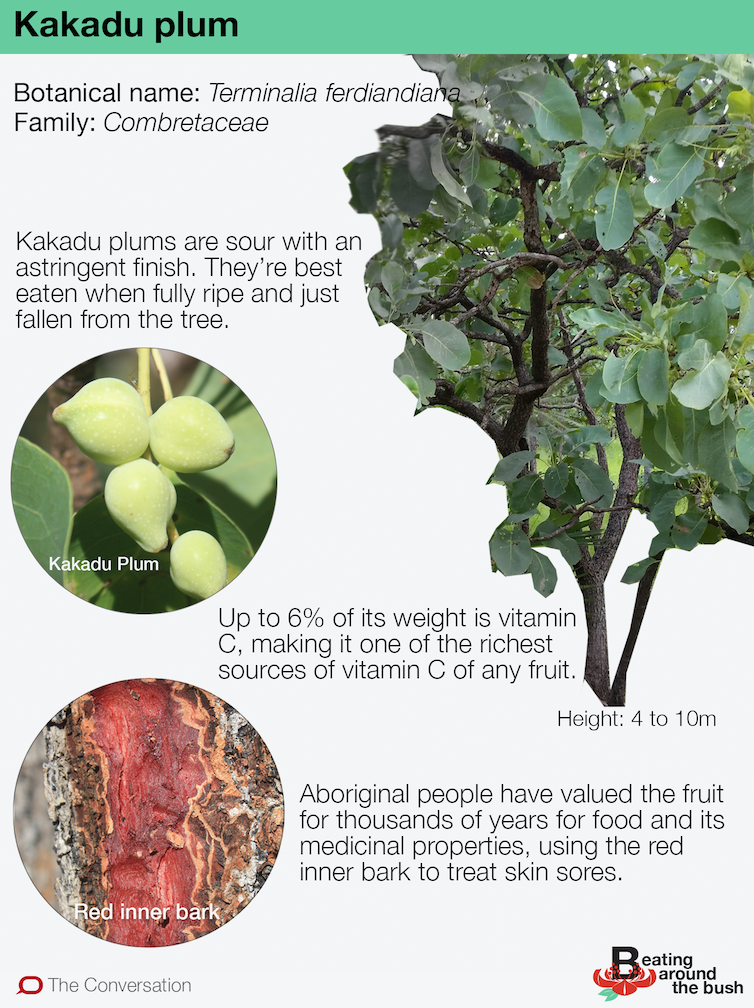 A plum by any other name

Kakadu plums are abundant in the eucalypt woodlands of the northern savannas. There are a plethora of Aboriginal names that reflect the distribution of the species and the broadly held knowledge across numerous language groups, such as “Gubinge”, a name from the Bardi people north of Broome.

Common names such as “billygoat plum” or “green plum” are also sometimes used. But thanks to marketing success, the common name “Kakadu plum” is the most well known, although it’s misleading.

While the species is found in Kakadu National Park, its distribution extends to the savanna vegetation, from the Kimberley to Cape York.

The rise of the Kakadu plum to international fame as a “superfood” may appear to have come about almost overnight. But this story has been a long time in the making.

Aboriginal people have valued this plant for thousands of years for its food and medicinal properties. The health benefits of the fruit were certainly recognised, but more specifically, the red inner bark was used to treat skin conditions and sores.

The findings of western scientists also go back a little way. Pioneering analysis of the composition of bush foods in the early 1980s found phenomenally high vitamin C content in Kakadu plums.

Citrus fruits are known for being good natural sources of vitamin C, which makes up about 0.5 per cent of their weight.

But the Kakadu plum tops the scale, with vitamin C levels of 3.5-5.9 per cent of its weight. This is about 50 times more vitamin C than in oranges.

Chemicals in the plum also have antioxidant, anti-inflammatory and antimicrobial properties, and recent research has shown extracts have excellent preservative qualities. This means the plum is now used in the seafood industry to extend the shelf life of, for instance, cooked prawns.

Now, increased demand for the fruit has produced opportunities for Indigenous communities to create enterprise on country.

Many communities in the Top End and the Kimberley are now engaged in fruit harvesting, which, for the most part, takes place from the wild on Indigenous-owned land.

A successful example is at Wadeye, about 250 kilometres southwest of Darwin.

I spoke to the community development officer at Thamarrurr Development Corporation, Melissa Bentivoglio, who said: “Thamarrurr Plums [Kakadu plums], based at Wadeye, has been evolving over the past 10 years as a locally owned and operated Indigenous enterprise. This year’s plum season saw over 250 local women harvest over 10 tonnes of plums from their clan estates in the Thamarrurr Region.”

“The community continue to carefully discern their way forward in this local enterprise to ensure community ownership and long-term sustainability.”

But Indigenous representation over the entire supply chain and processing is poor. The participation rate in the bush food industry is reported to be less than 1 per cent.

Indigenous groups are actively seeking mechanisms to see greater recognition and returns from their traditional knowledge.

In 2007, for instance, the American-based cosmetic company Mary Kay Inc. was granted a patent for Kakadu plum extracts in a skin cosmetic product.

These patents were opposed following concerns around the recognition of the Indigenous knowledge and the lack of any benefit-sharing arrangements with relevant Indigenous communities.

They were rejected by IP Australia on the grounds of lack of novelty – there were serious claims of biopiracy – commercially exploiting natural material – a cloud of uncertainty around the legal acquisition of the plant material.

The increasing demand for the fruit and sustainability concerns of the harvest has led the Northern Territory government to draft a management plan for Kakadu plum. It was released for public comment last year.

Ecologists also know the fruits of Kakadu plum form an important part of the diet of a suite of small native mammals, such as possums, rock rats, tree rats and bandicoots. The recently observed decline in these populations can, in part, be attributed to overly frequent fires, which are detrimental to small trees in the wild like the Kakadu plum.

The NT government’s management plan will need to ensure commercial harvest doesn’t add to the pressure on these native mammals.

What’s more, the traditional medicinal uses are being tested in a current research project through a Co-operative Research Centre for Developing Northern Australia-funded collaboration to assess potential for establishing a medicinal plant agribusiness on Indigenous land.

It’s not easy being a super plant.

Buy a car from your couch: Digital dealership hopes to disrupt industry

Life is your creation: Here’s what we know so far about Margot Robbie’s Barbie

Meet the Kakadu plum: An international superfood thousands of years in the making

Life is your creation: Here’s what we know so far about Margot Robbie’s Barbie

Buy a car from your couch: Digital dealership hopes to disrupt industry