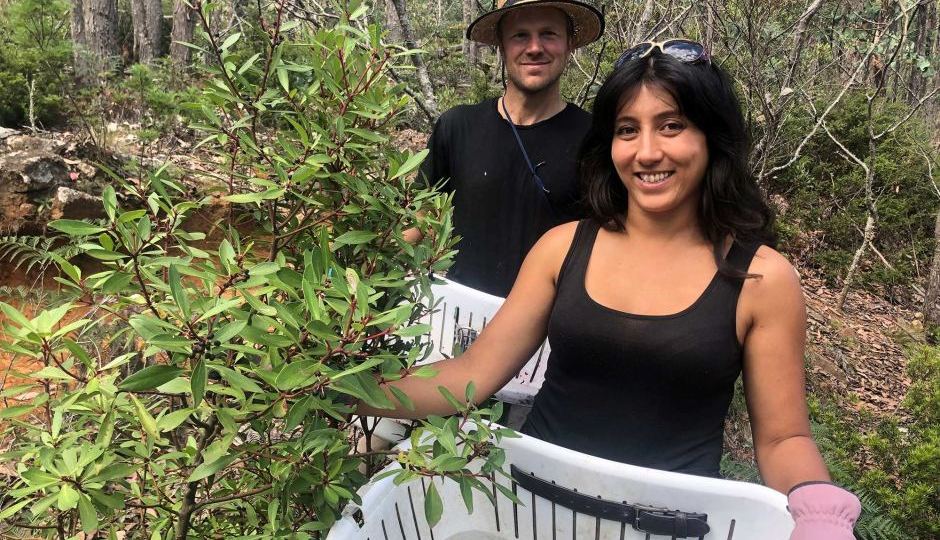 On a mountainous property perched in the rolling hills of the Southern Midlands, wild harvesters are foraging for this year’s season of pepper berries.

The tiny, spicy berry is native to Tasmanian Aboriginal land – known as palawa country – and is said to have been a key ingredient in bush tucker hundreds of centuries ago.

Wild harvesters and business partners Corinne Ooms and Chris Chapman are convinced the native fruit could be the next big “superfood”, but are baffled why so few Tasmanians have heard of it.

“We import all this food to Australia, yet still don’t have a handle on the native foods growing in our own backyard,” Ms Ooms said.

Tasmania is fertile pepper country but the pair said the state’s summer bushfires had devastated supply, making this year’s harvest a “hell dry” and “disappointing” one.

“We’ll struggle to get even a single tonne this year, compared to previous years when we got 11 tonnes of the stuff,” Mr Chapman said.

Described as a cross between a plum and a Sichuan (or Szechuan) pepper, the pepper berry was “the pinnacle of native bushfoods” and prized by the state’s Indigenous custodians as they moved across the state, the duo said.

“These plants go back in time and we can’t replace that with European food,” Ms Ooms said.

“Real food has a story, it comes from a particular place and has been harvested in a particular way. It’s embedded within the landscape,” Mr Chapman said.

Pre-‘invasion’ foods served with a side of culture

Pepper berries are just one of the native ingredients being used to spice up dishes that are served by Tasmania’s first and only Aboriginal food business, palawa kipli, which means Tasmanian Aboriginal food.

Tim Sculthorpe is the proud palawa man behind the operation.

Concerned by an increasingly unsustainable world and eager to get back in touch with his Aboriginal heritage, Mr Sculthorpe began the business two years ago in an effort to bridge the cultural divide and encourage sustainable food practices.

“The fact there are no Tasmanian Aboriginal food businesses in the world and no one knows anything about palawa people, I wondered how I can educate people,” he said.

“Everyone is so busy in today’s world, no one sits down to talk about anything, so I thought ‘All right, let’s sit down and start a conversation about Aboriginal culture’.

“Travelling the world, I kept being asked what Australian food is and I would always say it’s Vegemite or meat pies, but then I realised, that is invaders’ foods.

“I want all of Australia to own the fact that Aboriginal food is Australian food – and that’s something we should all be proud of.”

“I want to take our culture back and teach people from food’s ground roots, what it’s all about,” he said.

Mr Sculthorpe said every day he came across someone who had never heard of Aboriginal culture, nor seen the Aboriginal flag before.

He said he hoped palawa kipli would one day become an Aboriginal operation from start to finish, with an Aboriginal-only supply chain and a commercial garden owned and operated by Aboriginal people.

‘Bringing Aboriginal issues to people through their mouths’

She said Mr Sculthorpe was “blazing a trail” towards sustainable foods that taught us about where we come from.

“Food often acts as a gateway into other cultures, so I think it’s really important what they’re doing, bringing native ingredients to a contemporary setting,” Ms Delany said.

“The language always gets people – they see this writing and they want to know what it is, how to read it and pronounce it,” she said.

She spoke of the importance of having “actual, true Tasmanian food” written on the menu in palawa kani, the state’s revived Tasmanian Aboriginal language.

“It’s important we get people used to saying and reading Aboriginal words,” she said.

She said it also complemented dual-naming initiatives the Tasmanian Aboriginal community was trying to achieve.

“[People] are really surprised that this is the first Aboriginal owned-and-operated food business in Tasmania, and that gives us another opportunity to educate them about our history,” she said.

“We’re basically bringing Aboriginal issues to people through their mouths.”