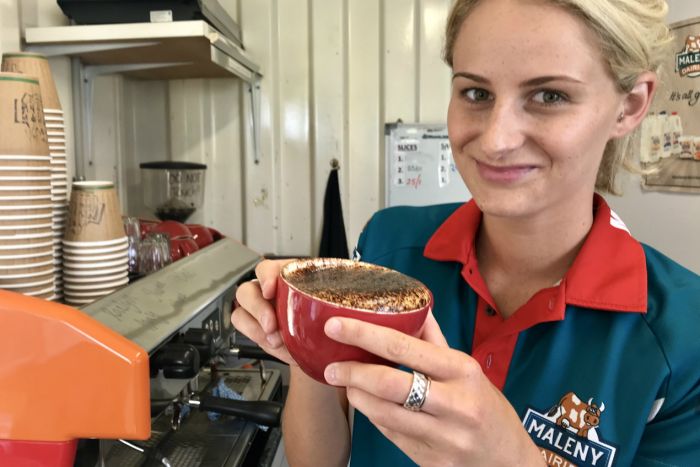 Tiffany Weyman has noticed the effect hot weather is having on milk froth. Photo: ABC

If your coffee is falling flat this summer, the blame may not lie with your barista or your machine.

The hot weather has created headaches for some dairy farmers and milk processors, affecting the structure of milk froth.

At Maleny Dairies’ milk bar in Queensland, barista Tiffany Weyman has noticed the quality drop in the past couple of weeks.

“We’ve lost a lot of texture in the milk, so we’re not getting as much froth out of it at the moment as we would like to,” she said.

“The heat gets to the girls [cows] a fair bit and it affects the different type of milk they give us.

“And obviously if our farmers aren’t giving us the right quality of milk that we need, then we can’t process it to give it to the cafes how they want it.

“We’ve had a few cafes complaining recently about how they couldn’t get any froth out of the milk, but it is looking positive from here forward. The last few batches have been a bit better.”

Maleny Dairies took the step of using social media to say sorry for the fact its milk has not been frothing as usual.

The independent processor, which is supplied by 10 farms across the Sunshine Coast hinterland, has a reputation to uphold.

Its creamiest milk, sourced from three guernsey herds, was judged the nation’s best in the 2017 Australian Grand Dairy awards, and is in the running again this year.

“Obviously the coffee market is a pretty big market these days, and if it’s not frothing we can’t have our customers blaming the machines,” Maleny Dairies owner Ross Hopper said.

“It’s just a seasonal thing with the milk.

“We’re just letting you know this is nature. This is what happens when you don’t stuff around with milk, you just sell what the cows give you.

“The structure of the milk changes with the weather and the environment and what the cows are eating.

“We haven’t changed anything at our end. The cows are just naturally progressing along with the changes in the weather.”

Mr Hopper said things would pick up again as soon as there was a good thunderstorm.

But he said smaller processors were more vulnerable because they often sourced milk from geographical areas with the same climatic conditions.

“Throughout the year, the consistency of milk changes for every dairy farm,” he said.

“The large dairy companies manage this simply because they’ve got a huge area to bring that milk in from.

“That allows them to really make their milk the same consistently because they can simply blend those together. But it’s a very natural thing.”

Natural, but a bit of a challenge for baristas like Sean McGowan, from Montville Coffee and the Sunshine Coast Roasters Guild.

“This is a consistent torment that we deal with in the coffee industry,” he said.

“Each season we see variations in not necessarily the quality or the taste of the product, but certainly the ability to use it to stretch the milk to create the foam and the texture that we like, to create the differences between a flat white and a cafe latte and a cappuccino for example.

“Specifically what we’re looking at is these small bubbles that pop up in our milk jugs which quickly deteriorate and create a very flat froth for us.

“And therefore we can’t produce the abundance of froth that we’re used to putting in a customer’s coffee.

“That leads to a different experience which can lead to a dissatisfied customer.”

But Mr McGowan said it was important to celebrate provenance and local dairy farmers.

“We want to make sure that we’re championing their story and celebrating the quality that they produce for us. Supporting them through these seasonal fluctuations that they can’t control.”

What does science say about the problem?

But what exactly is bursting the baristas’ bubbles?

University of Queensland food sciences researcher Bhesh Bhandari has just embarked on a two-year project in co-operation with a major milk processor, the Australian Research Council and Dairy Innovation Australia, to discover the answer.

He said the science behind milk froth quality was a complex issue.

“It’s not only protein. You have got fat in the milk and then you have an enzyme in the milk, which is called lipids,” Professor Bhandari said.

“Those enzymes can attack fat globules and that releases fatty acids. If the free fatty acid content in the milk is a little bit higher, it deteriorates the forming ability of the milk.”

“There’s a technique of frothing as well, the processing method, what sort of temperatures you are using — that also plays a role.”

Professor Bhandari said milk samples from Western Australia, Victoria and Queensland were already being tested in an effort to solve the mystery behind providing the perfect froth.

“The exact reason is very difficult to say. I hope we’ll find out,” he said.

Why your cappuccino could be looking more like a flat white