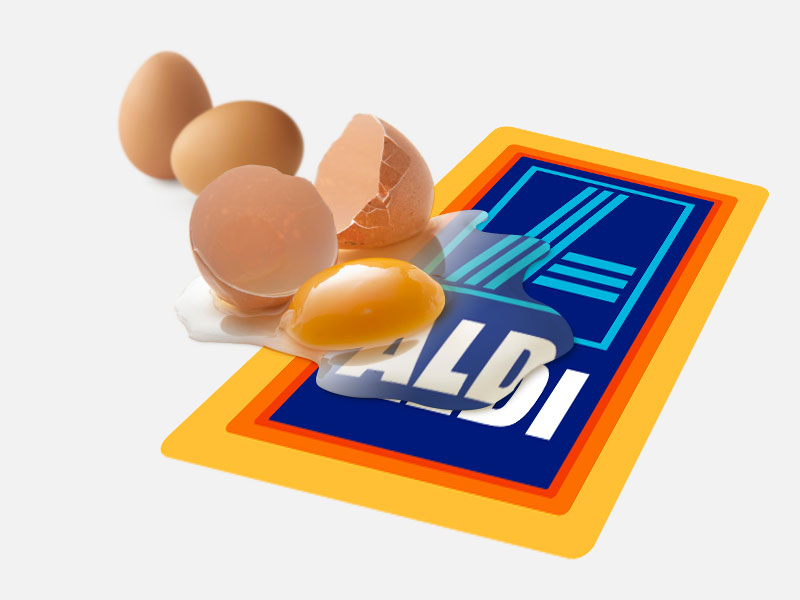 Customers and animals rights groups say Aldi’s pledge to rid its supermarkets of caged eggs by 2025 is a far too lenient deadline.

Currently over 50 per cent of the supermarket chain’s eggs come from chickens confined to small cages considered cruel by many outside the egg industry.

But the nine-year transition period set by the German chain frustrated a number of groups, including the RSPCA, which urged the supermarket to consider a much sooner deadline.

An Aldi spokesperson blamed the lack of existing infrastructure in Australia to support a free-range only operation.

“As the third-largest supermarket chain in the country, Aldi has the potential to set the bar for other businesses to follow in their footsteps,” RSPCA chief executive Heather Neil said.

“There are still 11 million battery hens in Australia and the sooner they can be set free from cruel cages, the better.”

A spokesperson for Aldi Australia blamed the country’s lack of existing “infrastructure to support a cage-free only egg industry” and the “complexity” of the transition.

Or the decision could be linked to the higher cost of free range eggs.

John Rohde, who sells his Rohde’s free range eggs to IGA and Foodland, told The New Daily he was approached by Aldi, but it lost interest after hearing his prices.

“People say they want free range eggs but they want them really cheap,” he said.

As consumers flocked to the Aldi Facebook page to express anger over the deadline, Animals Australia said the company should be able to make the change sooner.

“We will work with Aldi to see a complete phase out of cage eggs happen sooner rather than later,” a spokesperson said.

In April, furious consumers took to the Aldi Facebook page to demand the removal of its “free range eggs” with stocking densities of less than 10,000 hens per hectare.

Aldi’s reluctance to make a sweeping change could also have something to do with upholding its reputation as Australia’s cheapest supermarket.

The German chain has gobbled up 12 per cent of the market share in Australia in a few short years, aided by its thrifty operating and transportation techniques.

But Aldi has been slow to make a move on caged eggs, and was beaten by Woolworths, Subway, Hungry Jacks and McDonald’s in Australia.

In 2013, Woolworths pledged to ditch caged eggs by 2018, including as an ingredient in its home brand products such as cake mix.

Coles did not respond to The New Daily‘s request for its stance on caged eggs. According to Animals Australia, it has not pledged a complete phase out.

Despite Woolies’ pledge, it joined Coles in receiving a poor rating in the global Business Benchmark on Farm Animal Welfare in 2016.

Woolworths was found to be “making progress” on its standards, while Coles was deemed to have shown “little implementation” of its own animal welfare agenda.

Aldi was also put in tier four, below McDonald’s, Subway and Nestle.