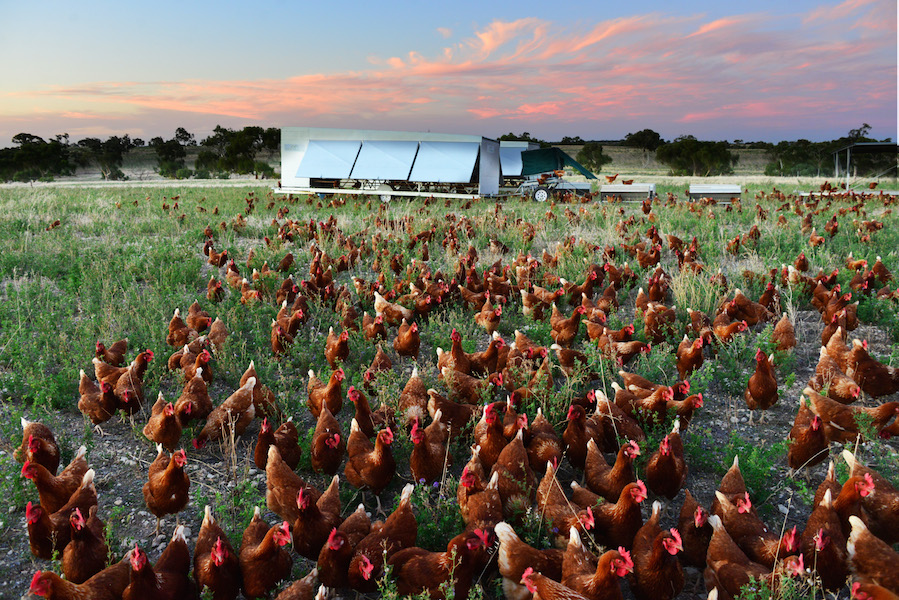 In a week of controversy about allegedly misleading free range egg labelling, a South Australian couple are showing the big supermarkets how it’s done.

Sally and Bill Hood weren’t surprised that Choice Australia rated their Hood’s Earth Eggs farm as the lowest-density free range egg operation in Australia, but one thing did catch them off guard.

“They said we have seven chickens [per hectare], but we’re not quite up to that yet,” Mrs Hood laughed.

“It’s only four at the moment.”

Their farm in Keith, South Australia, offers the kind of space most chickens in Australia can only dream of,  illustrated on Thursday when state and federal consumer affairs ministers implemented an official limit of 10,000 hens per hectare for operators wishing to meet the “free range eggs” definition.

It is a definition that has attracted plenty of criticism from animal welfare activists that argue such a limit is a far cry from what consumers expect free range to mean, with some arguing the limit should instead be the CSIRO recommendation of 1500 hens per hectare.

While Mrs Hood thought the current limit was indeed misleading, she was reluctant to criticise her competitors.

“There’s room for everybody in the production system, there has to be,” she said.

“But some would put the argument out there – it’s not necessarily mine – that for smaller-density producers like ours, it is hard to show what our point of difference is, we don’t get special words, we’re just ‘free range’ like the man who’s running 10,000 chooks [per hectare], and it’s hard for the consumer to understand why ours are a little more expensive.”

Choice Australia calculate Hood’s Earth Eggs at $1.14 per 100g, whereas a big player like Woolworths Select Free Range Eggs, who pack chickens in at 10,000 per hectare, offer product at $0.71 per 100g.

Mrs Hood is a fan of proposals that would see the number of chickens per hectare displayed on the carton, so consumers could at least make an informed choice.

The Hoods have looked to America for a special word that might help them differentiate, and they’ve found it – “pastured” free-range eggs, which describes a system that exactly matches what their operation is.

What the Hoods do is move their chickens, guarded only by their maremma shepherd dog, in a mobile chicken shed from one pasture to the next, where the birds are free to express natural instincts like scratching, digging and dust bathing, and feast on a diet of fresh bugs and insects.

This is particularly convenient for the Hoods as it means the hens devour invasive snails that otherwise wreak havoc on their property.

They say it is a particularly environmentally friendly way to operate as by moving the chickens around they regenerate the land, which also runs cattle, their original calling.

The Hoods entered the egg business after going on a holiday around Australia and struggling to find eggs that met their expectations.

“Essentially we were cattle farmers turned chook farmers, and travelling around we thought oh my goodness gracious me, eggs don’t taste like they do at home,” she said.

“We’re going to mass produce eggs in our backyard, we said!

“In April 2014 we sold our first egg, and now we have six thousand chooks.”

According to the Hoods, they are struggling to keep up with demand

Asked if she would go up to Choice Australia’s verdict of seven chickens a hectare or even all the way up to eight, Mrs Hood laughed.

“I’d have to reprint my cartons [with the new number] – I’d rather just buy more land.”