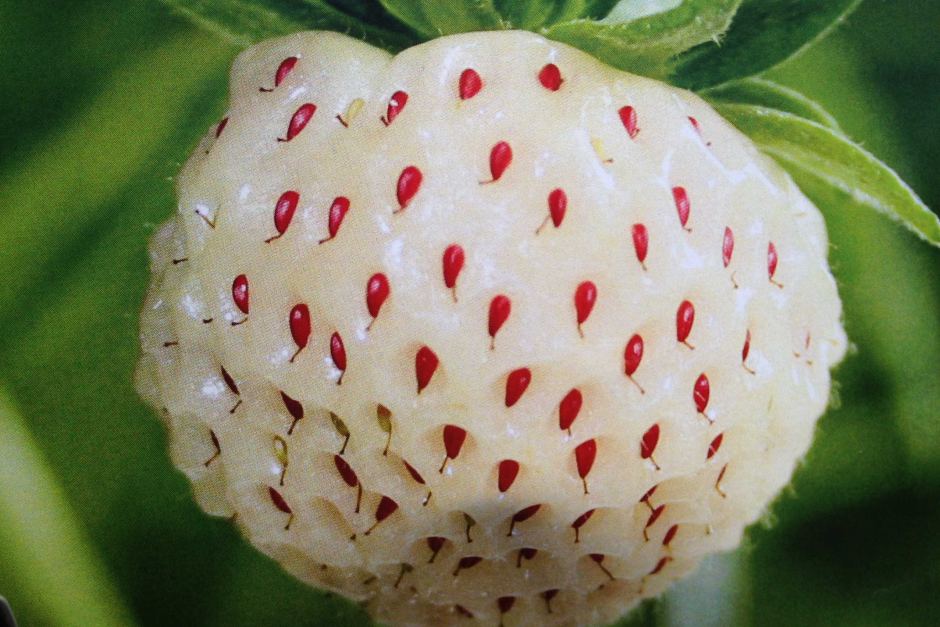 A freaky-looking hybrid strawberry that tastes of pineapples is about to make its debut in Australia.

The white berry with external red seeds – the opposite of what supermarket shoppers are used to – was bred from nearly-extinct white strawberries that European colonists brought back from their conquests in South America.

Its Australian importer, United Nurseries, assured potential buyers that it tastes delicious, with a hint of citrus.

“They are still a strawberry so you have a very subtle taste at the beginning of a citrus, pineapple-type taste and it finishes off in a strawberry flavour,” United Nurseries spokesman Phillip Neilsen told the ABC on Monday.

The fruit, already sold in Europe and the UK, was the product of years of patient selective breeding by Dutch farmers in the early 2000s.

According to VitalBerry BV, the company that created the fruit, the white strawberries used to create the hybrid were originally from Chile, and were almost extinct. The last known cultivars of these white berries were discovered by the company growing in southern Europe and cross-bred with the far more popular red variety to create a historical throwback with a modern flavour.

The end product, to be sold as the ‘pineberry’ in Australia, was originally debuted in the UK on April Fool’s Day, which confused things a little. Unfortunately, no one believed they were real.

During the growing process, the pineberry flesh starts off green before gradually turning to a white (or sometimes pale pink or pale yellow/orange) colour studded with red seeds. Fully grown, they measure between 15mm and 23mm across, making them slightly smaller than regular strawberries.

It reportedly took the local importer, United Nurseries, four years to gain the necessary government approvals to bring them to the Australian market.

The secret history of fruit

One of the consumer concerns that the importer was keen to head off was accusations of genetic modification.

“We were asked that at the flower show and we can honestly say that they are actually bred from real strawberries,” Mr Neilsen said.

“They use a selection criteria and then basically pick out X amount of fruit. It’s taken them many years to get to this point.”

Selective breeding is nothing to be worried about. As recently reported by Israeli researcher Dr Harry Paris in the journal Annals of Botany, the sweet and juicy modern watermelon was once bitter, with hard, pale-green flesh. This was changed with years of patient farming.

Even concerns about genetic modification may be overblown. As noted by PhD student Diana Zanfirache, who recently wrote in defence of GM-food for the ABC, there is much confusion about the topic.

“We continuously object to GMO food, yet we fail to understand that almost everything we eat has been modified by man and is the product of artificial selection,” Ms Zanfirache wrote.

“Simply put, it doesn’t matter if a new organism was produced by the merging of two different genes in a laboratory or by careful breeding. GMOs are simply a natural extension of what farmers have been doing for thousands of years.”

Selective breeding by ingenious farmers gave us the watermelon we know and love, and the same ingenuity has given us the pineberry.

Just don’t expect the white variety to challenge the rightful place of the red in fruit salads, trifles and chocolate fondues any time soon. They are still only a novelty in European.