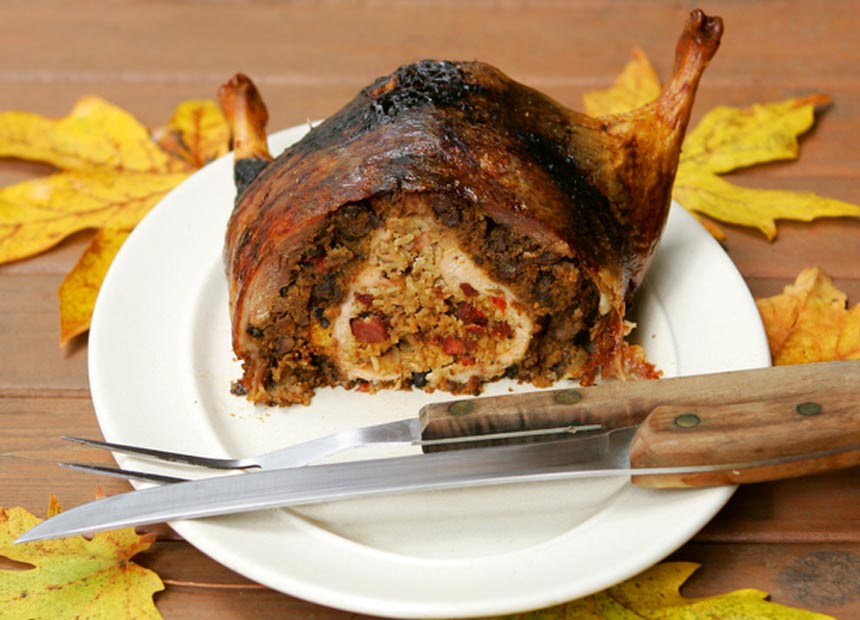 It’s notoriously difficult to please everyone at the family Christmas celebration.

Picky eaters abound and food wastage is an inevitable, if not regrettable, consequence.

Sick of it? So are we. Enter the Turducken – the gourmet holiday season equivalent of a meatlover’s pizza.

As the name suggests, it’s a veritable beast of a meal involving an entire turkey, chicken and duck and fast gaining popularity in Australia.

Sydney butcher Adam Stratton pioneered the concept locally, introducing it to his stores five years ago.

“With seafood taking off in Australia, we were looking for something different to offer to our customers,” Mr Stratton tells The New Daily.

“We went look overseas and saw what they did in America. I thought we could put our own little twist on it.”

In its first year, Mr Stratton sold just 70 Turduckens. The following year, that number leapt to 120. By the third year, he was selling 400 and last year the grand sales total was 1200.

“There’s a bit of an art to it, it’s not shoving it all in,” Mr Stratton explains.

His version, which costs for $130 and feeds up to 15 people, is comprised of a deboned turkey, wrapped in a deboned duck and chicken, filled with several different types of stuffing and wrapped in bacon.

It comes with cooking instructions and weighs five kilograms.

“Why not have all your meat in one place so you can cook it at the same time?” he says.

If you want to bring some Turducken magic into your home, here’s where to pick up your own: Woolies’ Gold Turducken is “moisture-infused” for extra freshness, stuffed with fig and pistachio, topped with bacon lattice and garnished with rosemary. The discount supermarket offers duck and turkey tenderloins wrapped in an entire chicken and filled with cranberry, apple and maple. This free range version is a chicken inside a duck inside a turkey, wrapped in double-smoked bacon with three different types of stuffing. A turkey stuffed with a duck and chicken filled with chopped apple and bacon rashers, with other stuffing options, including gluten-free varieties, available.