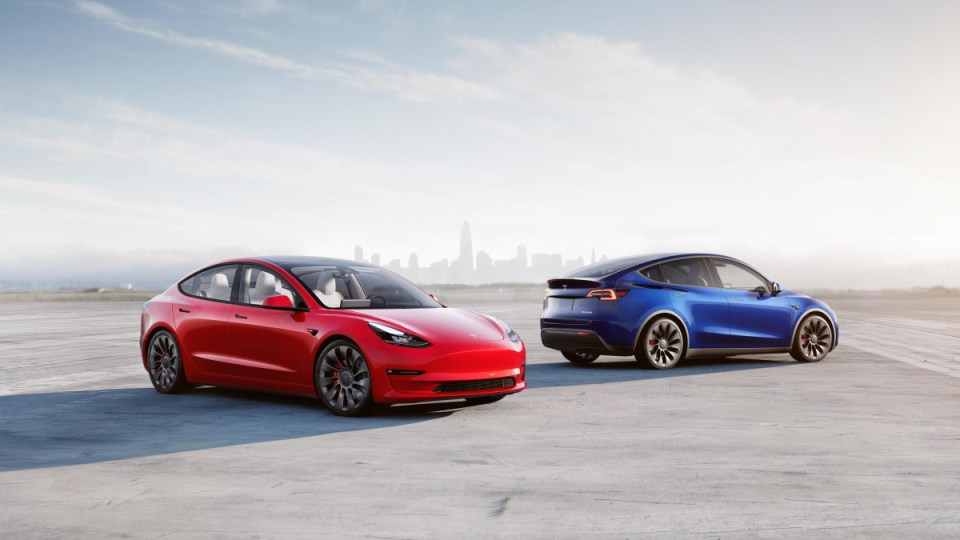 Tesla is looking to shake up Australia's EV market with the launch of its Model Y (right). Photo: Supplied

Australia’s migration toward electrified motoring is shifting up a gear with at least 30 new EV models launching before the end of 2022.

That number is impressive considering only about 20 different battery electric models are sold here now, not counting hybrids or plug-in hybrids that still have internal combustion engines.

Critically, we could see the minimum price of entry reset for new battery electric vehicles below $40,000 (before subsidies) courtesy of new Chinese brands.

The largest new vehicle retailer in the land, Toyota, will hopefully launch its first battery electric vehicle, the bZ4X SUV, in Australia before year’s end.

All of which means the sales of EVs should skyrocket from their paltry share of the new car sales market of about 1.5 per cent (we don’t know exactly because Tesla’s 10,000-plus sales are not published) to, well, maybe 3 per cent.

“It will come from the volume players and that happens when we get to that magic price-point, which probably is $40,000.

“If a car company brings something in that’s well-specified and a good price then Australians will buy it. It’s always been that way in Australia and electric vehicles is exactly the same.”

But as EV numbers grow, many dozens of new petrol and diesel cars, SUVs and utes will also launch this year in Australia.

Critically, there will be no electric utes launched in 2022, as diesel 4×4 utes such as the Toyota HiLux and Ford Ranger are hugely popular.

There are also no big seven-seat electric SUVs coming to rival the likes of the Toyota LandCruiser.

“There is no doubt once we get electrified utes it will go gangbusters in Australia,” Booth said. “It will take off because that’s what the market wants, just like SUVs.”

Many of the new EV arrivals will be expensive and low-volume models from luxury brands who can better cope with the high cost of battery packs and still have a profit margin. Mercedes-Benz has six EVs slated for potential local launch and BMW three.

Of course, all this EV activity is happening despite a lack of incentives or encouragement from the federal government, which still lacks any form of vehicle CO2 emissions reduction plan despite years of debate and study.

Instead, state governments and territories have taken up the slack. NSW leads the way with both tax exemptions and rebates for EV purchases.

“We’re a long way behind in Australia on both incentives and infrastructure development,” Booth said. “I think there are a lot of Australians who actually want to buy an EV but they just can’t get one or make it work with what they are trying to do in their lives.

“We see that the demand for EVs is stronger at the moment than the available models and supply.”

That situation will be addressed to some extent in 2022. Here are 10 key EVs arriving in Australia in 2022.

Tesla dominates EV sales in Australia with the Model 3 sedan. The Y is a five-door five-seat SUV that rides on the same platform and offers fundamentally the same performance. Expected to be offered in a three model line-up with single and dual motor options and a minimum range beyond 400km, it will be priced higher than the 3. But that shouldn’t stop the Model Y replacing it as the most popular EV on Aussie roads.

China builds the most affordable EVs in the world and the Ora Good Cat small car – if it does turn up in 2022 as promised – could become the cheapest of the breed sold in Australia at about $40,000. Ora is an EV brand owned by the giant Great Wall Motor automotive business that already sells petrol and diesel utes and SUVs in Australia. The Good Cat’s claimed minimum range is about 400km.

BYD (or Build Your Dreams) is another Chinese auto giant. Its roll-out in Australia led by an independent importer based in NSW has been marked by a lot of big talk. But if the Yuan Plus SUV does get to Australia in 2022 as promised then it could attract lots of interest with its modern styling, range beyond 400km and expected pricing in the mid-$40,000 bracket. The importer is promising more BYD models to flow regularly into Australia, including a $35,000 compact car, but no real details have been offered yet.

The cheapest EV sold in Australia today is yet another Chinese model, the MG ZS EV. Currently priced from about $45,000 (before the subsidies offered in some places), the small wagon gets a significant update in 2022 that includes greatly improved battery range, as well as upgraded infotainment features. That’s all good news because the current version has its limitations, as TND found here.

Introduced locally by Rafael Nadal and new Australian of the Year Dylan Alcott, the EV6 shapes as a breakthrough vehicle for Kia, which has already dabbled in the Aussie electrified market with the frumpy Niro. Arriving early in 2022, the EV6 is a whole different proposition thanks to its powerful performance and long battery range. Pricing will start at $67,990 for the non-identical technical twin of the Hyundai Ioniq 5, which arrived here in late 2021. The good news is more affordable versions of both cars will come.

If you’ve been eyeing off the Volkswagen ID.3 small EV and wishing it was sold in Australia, then the Born is your solution by another name. Cupra is a spin-off from Spain’s SEAT, which is a subsidiary of VW. The Born is a five-door hatch based on the same component set as the ID.3 under its own stylish skin, which means lively performance and a range of 420km for the entry model. Pricing is tipped to start close to $50,000, which could make it a really tempting proposition when it arrives in late 2022.

OK, so it’s not sexy, but the E-Transit will be the first EV launched in Australia by the blue oval and also one of the first electrified delivery vans available here. Imagine the impact on CO2 and particulate emissions if all those diesel vans on our roads were replaced by vehicles like this? It’s already happening in the USA where the likes of FedEx and Amazon are ordering thousands of electric vans. The E-Transit goes on sale mid-year with a promised 1616kg payload and a maximum 317km range, although you probably can’t achieve both at the same time.

The strange name has its origins in a motor racing company not a strip club. Part of the giant Chinese Geely empire along with close relation Volvo, Polestar has already started offering test drives for the 2 in Australia, with first deliveries slated for February. Priced and sized to go directly against the Tesla Model 3, the Polestar 2 is receiving strong reviews and plenty of early interest. Single and dual motor models with range of up to 540km are on offer.

Toyota is the dominant sales player in Australia and that makes its first EV one of the most significant vehicles on this list, simply because of the massive rusted-on buying audience it will be exposed to.

Officially, the introduction target remains late 2022, but the global semi-conductor shortage is playing merry hell with Toyota’s production schedules and waiting lists. About the size of the RAV4 SUV, the bZ4X will be offered in both single and dual motor guises with a range of about 500km. No pricing has been announced yet, but Toyota keeps telling us it won’t be cheap.

In Australia, Volkswagen has been an outspoken critic of the federal government’s lack of CO2 emissions regulation and encouragement for electric vehicles, declaring it has delayed the local roll-out of its EVs. But we still might just see the ID.4 SUV in Australia in late 2022. The five-seat wagon would sit in the size sweet spot in Australia against the Model Y, bZ4X and Polestar 2. It might well undercut them on price too.