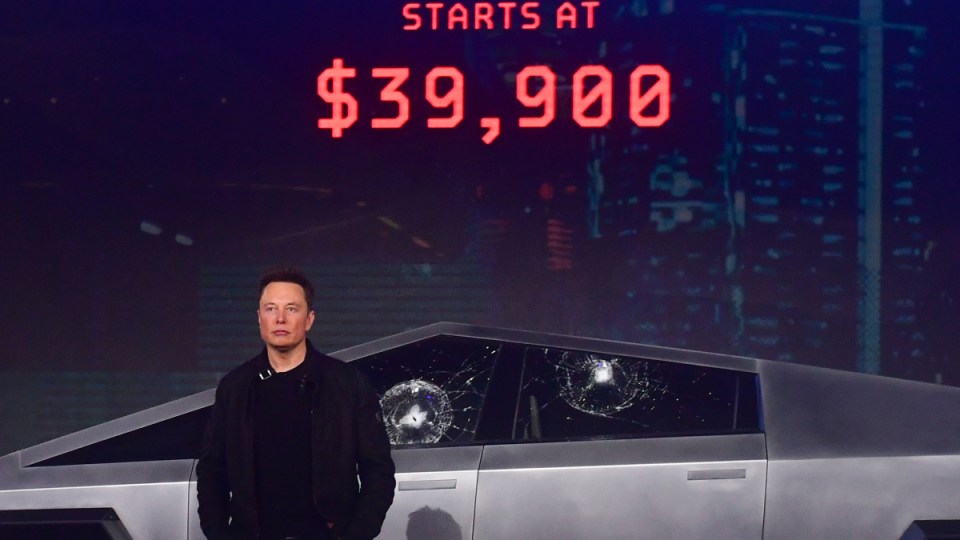 An electric pick-up truck styled like a spaceship, two smashed windows and 250,000 orders within days.

Elon Musk has done it again.

Now, as per so many journeys Musk has taken us on we get two years to see if the Tesla Cybertruck rolls out on time and delivers what was promised on-stage in Los Angeles last week.

This was up there with Musk’s most memorable moments, even if it descended more than once into a giggling mess.

It’s all grist for Tesla boss’s publicity mill. A Google search on Tesla Cybertruck brought up  86,800,000 results in 0.45 seconds.

There’s so much to mull over it’s almost overwhelming, but the styling dominates every conversation. There is nothing like it.

The Cybertruck is bigger, longer and looks more like a futuristic jet fighter on wheels than something Billy and Bob would use for a huntin’ and fishin’ trip in the back 40.

And its electric of course, not an emissions-spewing V8.

Musk hyped that rivalry by showing a video of Cybertruck towing an example of Ford’s top-selling F-150 up a hill while the Ford – rear wheels spinning – fruitlessly tried to drive in the opposite direction.

Rev-heads immediately started a mass debate over the fairness of it all. A Ford exec demanded a rematch, Musk accepted and then Ford backed down.

Another very public win for Musk. Tesla struggles to make money, British cave divers are no fans, but it seems he is unsinkable.

Better truck than an F-150, faster than a Porsche 911. Order Cybertruck online at https://t.co/hltT8dg2NO

The same can’t yet be said of Cybertruck. Musk so wildly over-promises there are plenty of sceptics about its future.

Will it be seen at all? And if it does make it into production will it have to bow to commercial pressures to look less polarising? Will it have to change to meet crash safety standards?

But design experts also argue Cybertruck’s shape has its virtues. It should be easy, cheap and fast to manufacture while the straight lines maximise load space.

Cybertruck breaks another automotive convention by looking nothing like other Tesla models. There’s a familial link between the Model S, X and 3, cars that have played such a role in making the California start-up the default electric vehicle manufacturer on the planet.

But the Cybertruck is a complete disconnect. It’s flat-sided, geometrically angled and clothed in bulletproof cold-rolled steel and – we thought – shatter-proof glass.

Yes, when Tesla’s chief designer, Franz von Holshauzen, smashed the Cybertruck’s front window with a steel ball and then doubled up on the rear window, things could have gone wildly out of hand.

Musk could be heard swearing under his breath, but while a bit rattled he ploughed on, the Tesla fanatics in the audience offering cheers and encouragement.

Musk never explained why the Cybertruck was so heavily armoured in the first place. Instead, he got to the pitch; impressive pricing, incredible performance and as an after-dinner mint, even a Tesla electric quad bike to carry in the Cybertruck’s bed.

And the response has been, well, what you would expect. About 250,000 refundable $100 orders have been placed years before the first Cybertruck is due to hit the streets.

Hang on, it’s going to be another wild ride with Elon.

⁦@elonmusk⁩ My friend and I just ordered the @Tesla Cybertruck, but he’s 72 and I’m 65 and we’re wondering if we’re going to make it before you delivery them to us. Can we test ride the prototype? pic.twitter.com/pML8MzkVar