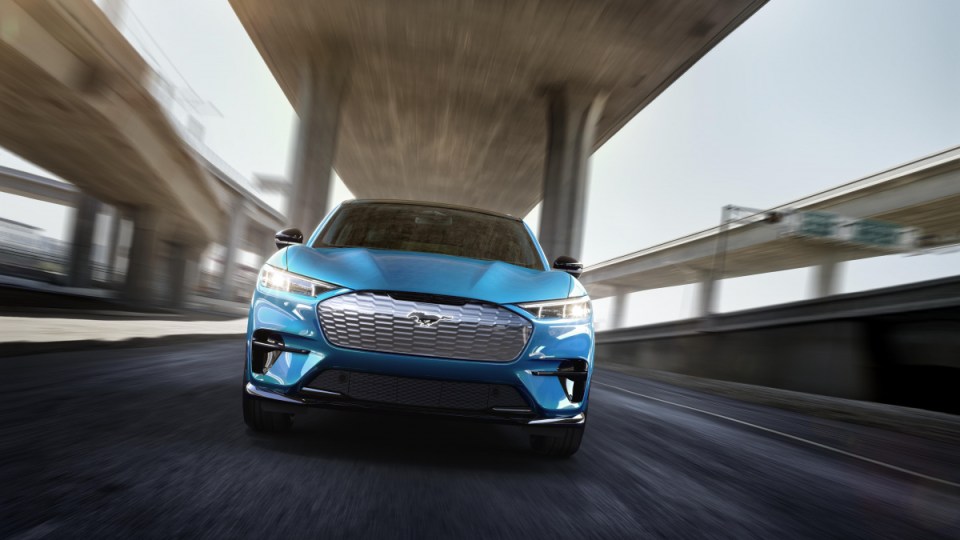 Ford has launched the first electric version of its famed sports car, the Mustang. But it's unlikely to make it to Australia. Photo: Ford

The world’s most famous sports car has gone electric, morphed into an SUV and become a Tesla fighter.

Unveiled in Los Angeles on Monday by actor Idris Elba, the Ford Mustang Mach-E trades in the iconic coupe’s two-doors and V8 engine for an electric motor, five doors and family-hauling ability.

The traditional Mustang, which first launched in 1964 and has gone on to sell 10 million examples, will continue complete with its fuel-munching engine.

That news will delight its Aussie fans who have made it the number one selling sports car in the country.

While the Mach-E will be built in right-hand drive it is yet to be confirmed for Australia. It is definitely going on-sale from late 2020 in North America, Europe and China, where there are much larger and better-supported markets for electric vehicles.

“We are bringing performance and environmental friendliness in one vehicle in a way we have never been able to do before,” said Ford executive chairman Bill Ford told.

“It’s a new family member … At some point … even the most rebellious Mustang owners move into a new phase of life, but you don’t have to give up your Mustang.

“This car fits the whole family and whatever you want to put into it.”

Not only does the new EV borrow one of Ford’s most famous names, the Mach-E designation also modifies the badge of one of Mustang’s most famous derivatives, Mach 1, which has been applied to high-performance models as far back as the late 1960s.

The Mach-E, which launches as single-motor rear-wheel drive and twin-motor all-wheel drive, is also capable of high performance.

The flagship GT Performance Edition model in launch range with 0-60mph (96.5km/h) acceleration as quick as 3.5 secs and a range between recharges as long as 480 kilometres. A top-spec V8 Mustang would struggle to match that.

Will it sell in Australia if it does make it here? Leading Melbourne-based Mustang tuner Rob Herrod says he’d have one.

“What I’ve seen and know about the car I like it, but reading responses online some people are anti-it,” Mr Herrod said.

“I don’t understand that because as soon as I saw it I liked it.

“It’s great how much room it’s got and stuff and all the mod cons. It looks to me like a Porsche Cayenne.”

It also vaguely resembles the Tesla Model X electric SUV, which is more expensive than the Mach-E but still a clear rival. Other electric SUVs are the Mercedes-Benz EQC and Audi e-tron.

Apart from styling details like the pony badge in the nose and tri-bar tail-lights, there is little about the Mach-E’s exterior that obviously links it  to the Mustang sports car.

It’s the same when it comes to the interior, which is dominated by a large Tesla-like control screen in the dashboard that includes the latest-generation Ford Sync infotainment system with artificial learning capability.

“This system adapts to each driver who interacts with the vehicle.”