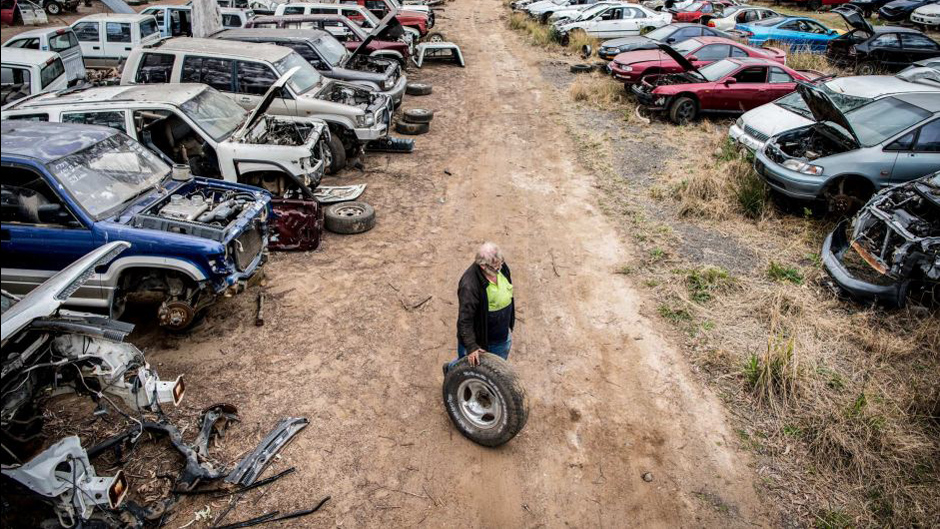 There are fears in the future Australia could become a dumping ground for polluting cars. Photo: Brendan Esposito; ABC News

State and territory environment protection authorities have sent more than 1,200 warning notices to drivers in the past year about their polluting cars, including hundreds of Toyotas with excessive smoke issues.

Last month, the ABC revealed Toyota is being sued as part of a class action over faulty diesel particulate filters (DPFs) in the Hilux, Fortuner and Prado vehicles sold in Australia between October 2015 and July 2019.

Scores of drivers have told the ABC their faulty DPFs cause the cars to spew out smelly white smoke and use more fuel.

Suzanne Harter, a clean energy campaigner for the Australian Conservation Foundation, said Australia needed to tighten standards to stop it from becoming a dumping ground for less-efficient, more-polluting cars.

“Australia is currently lagging behind the rest of the world on vehicle-emissions standards,” Ms Harter said.

“I think it speaks to a larger problem in Australia that we need to improve our standards, improve our testing regimes … and make sure the vehicles that are coming into our country are both fuel efficient and are able to protect public health better.”

Ms Harter said the lack of standards can put motorists who have recently purchased a vehicle with a failing system in a difficult position.

The DPFs are supposed to trap and burn off diesel particulates, stopping pollutants and particulates from going into the air.

Instead, mechanics and drivers familiar with the Toyota issue said the malfunctioning DPFs are clogging up, causing the excessive smoke and impacting on fuel efficiency.

Some Toyota drivers contacted the ABC after they were hit with notices warning them they could be fined if they didn’t stop excessive smoke coming out of their vehicles.

Sydney woman Kyle Kinchela, who runs a hydraulic repair business with her husband, was shocked when she received a notice from the NSW Environment Protection Authority (EPA) in June last year.

Their 2015 Toyota Hilux had excessive smoke issues, and the notice told her to fix her car or face a fine of up to $2,000 — even though her car had just been serviced.

“I obviously knew that it was blowing smoke at that particular time and it was quite bad, but it was not something I expected to receive,” she said.

“I called the EPA and I was quite surprised by their response, they stated that they were aware of issues with Toyota vehicles.

If I did not get the problem seen to within their time frame then they would fine us.

“I called Toyota and tried to get in for a service and I couldn’t get an appointment that suited within the EPA’s time frame, so I had to get the next best thing and call the EPA for an extension.”

The notice reads similar to a speeding fine, with a time, date and place the offending vehicle was spotted by authorities.

“You are advised that if an authorised officer reports your vehicle emitting smoke after Friday, 29 June 2018, a Penalty Notice ranging from $300 to $2,000 can be imposed,” the notice said.

“Exhaust emissions from vehicles are the biggest cause of air pollution in urban areas and can cause health problems.”

In most states and territories, the EPA or an equivalent department receives and records reports of polluting cars.

The ABC contacted all state and territory authorities to ascertain how many cars are being reported for expelling excess smoke.

A report of a smoky car is at least 10 consecutive seconds of smoke coming out of an exhaust.

The reporting of the issue varies between locations.

Victoria has the most comprehensive data, but does not breakdown the reports into much detail. For example, it does not specify whether the smoke is black or white.

Faulty DPFs are known to cause white smoke, while black smoke is an indicator of other problems.

Victoria’s EPA received 5,271 reports of excessive smoke from vehicles in 2018-19, an increase of 445 reports from the previous year.

Last year, 339 of those reports were for people driving a Toyota Hilux — the most of any car — although the data does not specify if it was white smoke.

Victoria’s EPA did not tell the ABC how many notices it sent, warning drivers to fix their cars.

The NSW EPA received 1,963 reports last financial year, an increase of almost 40 per cent, and issued a record number of 834 notices to drivers with smoky vehicles.

NSW did not break the figures down by car model.

The number of smoky vehicle reports in Queensland almost doubled in the past financial year to 3,169 reports, a 45 per cent increase on the previous year.

Western Australia had 454 reports of smoky vehicles and issued 398 notices to drivers.

In the ACT, there were 38 complaints about smoky vehicles last financial year, up from 21 complaints in the previous year.

There was no data available from South Australia and the Northern Territory, and Tasmania had fewer than 10 reports.

Adelaide driver Mike Stone was given a defect notice by South Australian police in November 2017 for excessive smoke coming out of his Hilux.

He has been back to the Toyota dealership four times to have the issue fixed.

“The first time was after receiving a defect warning from SAPOL [police] after leaving a smoke trail up the southern expressway,” he said.

“This so-called fix lasted about five months before heading back to the dealership again.”

Mr Stone said his fuel economy fluctuates and his car regularly leaves a big cloud of smoke when he takes off at the lights.

The ABC asked Toyota to comment on the notices sent to drivers, and the issue of emissions.

“We encourage any Toyota owners with questions or concerns about their DPF to contact their closest or preferred Toyota dealer,” it said in a statement.

“Alternatively, customers can find out more via a comprehensive DPF FAQ on the Toyota website.

“We are unable to comment on matters before the courts but reiterate our commitment, as always, to helping our customers with any questions or concerns they have about their vehicle.”

Dr Vicki Kotsirilos from Doctors for the Environment said there was “no safe level” for diesel pollutants, and any cars expelling higher than normal emissions were of major concern.

“Diesel emissions are particularly toxic chemicals that are released into the air,” Dr Kotsirilos told the ABC.

“When we inhale these chemicals, they can irritate the nasal passages, cause allergies and irritations, they can cause lung disease, trigger asthma in people who have asthma.”

“They are a class one carcinogen that can cause lung cancer and can contribute to heart and lung disease,” she said.

“Vehicles that rely on diesel, that don’t have proper filters, are more likely to emit diesel particulates into the air, and this would contribute to part of the air pollution problem.”

Dr Kotsirilos said the emissions are most harmful to people who live, work or attend school or child care near pollution “hotspots” like busy roads or intersections.

Australia has the “Euro 5” vehicle emissions standard, which limits the amount of noxious pollutants cars can emit.

However, Europe and most developed nations have tightened emissions standards to comply with what’s called Euro 6, or the more-stringent Euro 6d.

“When the Euro 5 was put in place, the diesel filters were part of that requirement,” the ACF’s Suzanne Harter said.

“Those filters are required for a really important reason, and that is to protect public health.

“If those filters aren’t working as they should, that means that there could be greater health impacts that we would want to accept from those vehicles.”

Dozens of drivers have told the ABC the faulty Toyota filters cause excessive smoke and impact fuel efficiency by up to 30 per cent.

That means more particulates are going into the air, and more CO2 is being produced because more fuel is being used.

No progress on vehicle emissions standards

Progress on changing car emissions and efficiency standards in Australia has stalled.

A range of issues are at stake, including the accuracy of emissions testing, which is performed in a laboratory before a car is sold to market.

Bodies such as the Australian Automobile Association (AAA) have argued for real-world testing, which would see cars driven over a 90km loop in a range of conditions to more accurately estimate a car’s emissions.

There is no follow-up testing once a car is on the road, even if parts designed to comply with emissions allegedly fail to do the job.

A ministerial forum set up in 2015 has failed to progress Australia’s emissions levels.

Ms Harter said as a result, Australia has become an “outlier” in the vehicles market.

“Some of the vehicles that are sold here are actually less efficient or more polluting than that same vehicle that would be sold overseas,” she said.

Michael Bradley from the Australian Automobile Association would not comment on Toyota’s DPF problems, but said the AAA has been supportive of a tighter emissions standards for years.

“The AAA has called for a comprehensive package of measures which address fuel standards, CO2 standards, noxious-emissions standards and real-world testing. These issues are intertwined and have to be addressed in one package,” he said.

A spokeswoman for Deputy Prime Minister and Minister for Infrastructure, Transport and Regional Development Michael McCormack responded to the ABC’s request for an interview in a statement.

“The Liberal and Nationals Government is currently considering the case for introducing the latest international noxious-emission standards for light and heavy vehicles [Euro 6d and Euro VI respectively], but has not made a decision on how or when these standards may be implemented and will continue to consult with stakeholders,” she said.

“The Government is committed to developing a sensible framework that places savings for motorists and health benefits for the community front and centre, while ensuring that the vehicles that Australians value remain in the market.”