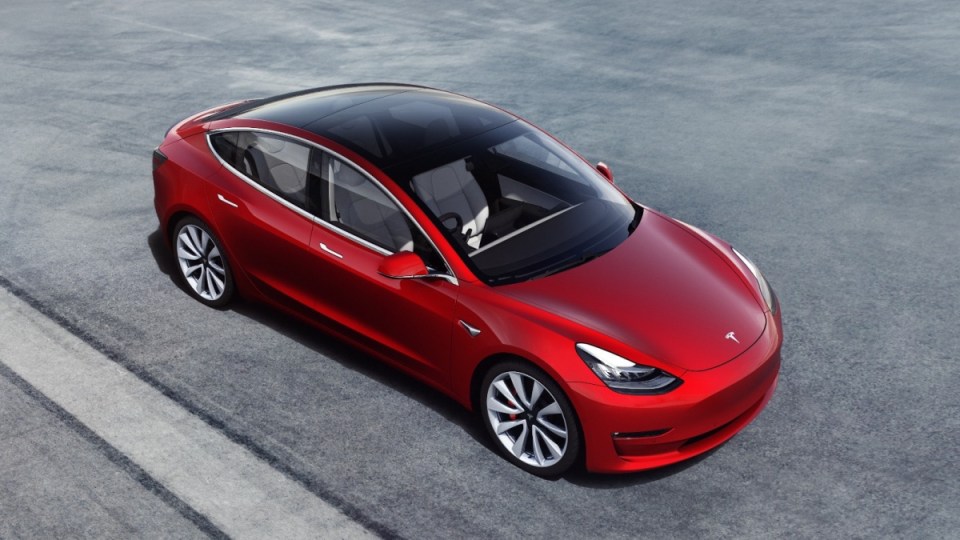 The Tesla Model 3 has made its way onto Australian roads, and it's a serious player in the electric car market. Photo: Tesla

The Tesla Model 3 is one of the most interesting and important cars to go on-sale in Australia in 2019.

Silicon Valley’s take on the modern motor car is innovative, price-competitive and, of course, electric.

It’s says much that it’s taken three years for the 3 to make it to Australia and in that time the expectation has heightened rather than fizzled.

After our first preview drive on local soil it’s understandable why.

The Model 3 is a four-door five-seat sedan pitched head-on against the likes of the Mercedes-Benz C-class, BMW 3 Series and Audi A4 in the compact luxury segment.

As per all Teslas, it’s a battery electric vehicle (BEV). So no internal combustion (ICE) engine, no fuel tank and – if recharged using renewables – no climate changing emissions. Of course, recharge using dirty coal and that picture changes dramatically.

Key elements of the Model 3’s drivetrain includes a lithium-ion battery pack – the size of which and therefore range and recharging time vary depending on the model – and one or two electric motors, depending on which model you choose.

The Model 3 ticks more boxes than just about any BEV to ever go on-sale in Australia.

It is price-competitive against orthodox competition (see more below), has ICE-rivalling range between recharges, lacks nothing for performance and takes interior presentation and technology interfaces in a whole new direction.

It has the potential to tempt buyers for how it looks and feels to drive and control as much as its environmental credentials.

How much does the Tesla Model 3 cost?

What does the Tesla Model 3 get?

One of many things Tesla does its own way is not publish how large the 3’s Lithium-ion storage batteries are. It’s a bit like not revealing how big the fuel tank is in an orthodox vehicle. So we are quoting figures found on the 3’s Wikipedia page.

Tesla does stuff like this. It’s a bit unpredictable and oddball and likes to do things its own way. Just like its boss Elon Musk really.

Recharge times can takes as much as 32 hours or as little as 22 minutes depending on what model you’re driving and what you’re plugged into. A 50kW DC fast charger – which is pretty common – takes about 90 minutes.

Tesla is offering the option of an over the air update called Full Self-Driving Capability for $8500, but it’s not yet up and running in Australia.

All Model 3s comes with a five-star ANCAP rating.

Just as it launches in Australia, Tesla has slashed the 3’s warranty in half, from eight years/160,000km to four years and 80,000km. However, it retained its eight-years battery warranty, which also extends for 160,000km or 192,000km depending on the model.

Our preview drive was in the top-spec dual-motor Performance model on a closed course, so there’s still much to be learned about this car. For instance, the surface was smooth so getting a handle on ride quality was a challenge.

Electric motors have the endearing trait of having maximum torque, or pulling power, available from zero revs so acceleration is startlingly strong. You shouldn’t lose a traffic light grands prix to anything this side of an exotic sportscar.

Allied with that is confident handling. The heavyweight battery pack sits in the floor lowering the centre of gravity, the suspension set-up is firm and there’s lots of grip from the all-wheel drive system.

The compact size of the battery pack opens up significant boot and ‘frunk’ (front trunk) storage opportunities and there’s no shortage of front and rear legroom for adults.

The tinted glass roof stretches from front to rear and is only intersected by a single I-beam roof bar.

From the driver’s seat it’s all about that 15-inch touch screen, which makes a similar visual impact to a giant cinema screen hanging on your rumpus room wall.

Virtually everything in the car operates through this screen one way or another. There’s no speedo and tacho behind the steering wheel and there’s only two roller buttons on the wheel itself.

Even the glovebox is opened via the touch screen. Climate control direction is determined via a waft of the hand, while car settings, audio and sat-nav are all here too. Speaking of sat-nav, you’ll never have to squint at a map again.

The speedo sits in the top-right corner of the touch-screen, a bit too far from the driver’s eye sight. It’s perfectly legible from the back seat, though!

A head up display is not available with Model 3, but it should be. Ditto a 360-degree camera, although all-round visibility is pretty decent and it’s spectacular looking forward.

But the most obvious issue is build quality. It was quite easy to walk among the Model 3s at the launch and pick varying gaps and misaligned panels.

Tesla’s problems building Model 3s to a high standard and at a rate that equals demand has been well chronicled, along with its consistent inability to make money.

The Model 3 is the first BEV you might consider buying as your only car or if you live outside an urban area.

You still have the issue of recharging time, but range, performance and price are in the ballpark.

On top of that the Tesla is handsome outside, innovative inside and a pleasure to drive. Yes, it has its issues like those obvious panel gaps, but the Model 3 deserves your attention if you’re in the market for a compact luxury car – be it electric or petrol-powered.

The Tesla Model 3 has finally arrived in Australia. Here’s how it drives