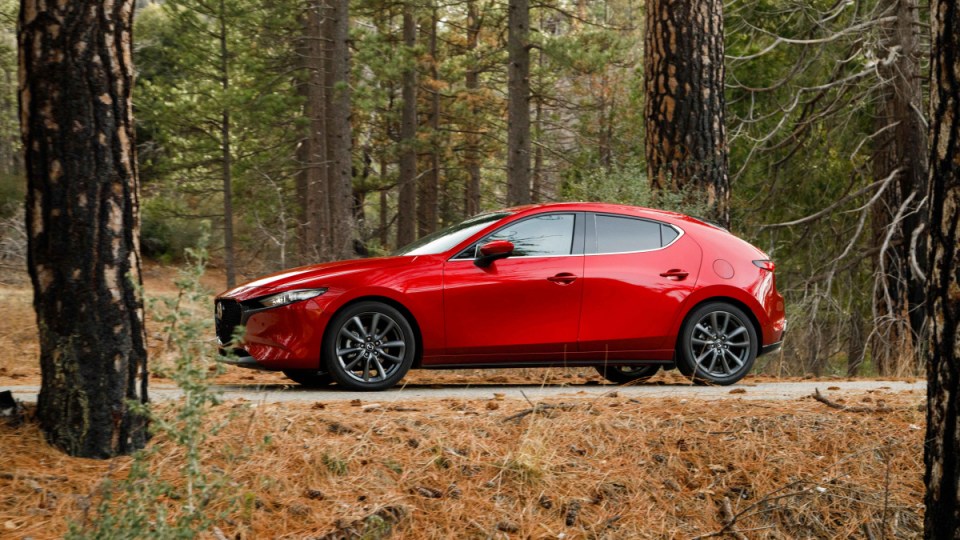 Going upmarket is never easy. I mean does anyone really think McDonald’s cafes are chic choices for dining?

Car companies face the same dilemma – always looking for a way to create a little pricing headroom in their line-up without losing buyers.

Now it’s Mazda’s turn to give it a try. The Japanese brand is about to launch the new-generation Mazda3 small car in Australia with a load more gear, technology and much higher entry prices.

That’s all in line with ‘upmarket mainstream’ positioning it dubs ‘Mazda Premium’. Translated? Mazda thinks it has enough cachet to leave the bargain-basement shoppers behind.

The Mazda3 is a small car that’s been among the most popular models sold in Australia since it replaced the 323 in 2003.

The five-door hatch version of the almost all-new, fourth-generation goes on sale in Australia in April, with the sedan following in June.

Both will come with the choice of 2.0-litre and 2.5-litre, four-cylinder engines and six-speed manual and automatic transmissions. There will be five models within the range – the new Pure and Evolve nameplates (replacing Neo Sport and Maxx Sport) and Touring, GT and Astina.

The 3’s popularity has been a key reason Mazda has risen to second in the Australian sales charts behind only Toyota.

It is the second-most popular passenger car in Australia, led only by the Toyota Corolla. In 2011 and 2012 the second-generation 3 was the biggest-selling vehicle in Australia.

Over the years, the 3 has embodied the key attributes that have made Mazda so popular here: Good looks, an engaging drive (remember zoom-zoom?), Japanese build-quality, equipment competitiveness and sharp pricing.

How much does the Mazda3 cost?

Mazda says it has added about $4000 in equipment to compensate for the price hike and is promising the new 3 is a significantly classier car to drive and experience. We reckon it’s pretty good too, but we’ll get to that further along in the test.

Mazda says it has pulled out of the cheaper end of the small-car market because there’s no demand down there. The bulk of its buyers are shopping far closer to $30,000 than $20,000.

The addition of a heap of new safety technology, essential for a maximum five-star ANCAP rating across the range, has pushed prices up too. We’ve covered the car industry’s angst about this issue previously here.

There’s also no doubt Mazda relies less on the 3 for sales than it used to. These days the CX-3 and CX-5 are becoming more and more important, reflecting the market-wide buyer shift to SUVs.

This push upmarket is an emerging trend in the small-car market. The Corolla, Ford Focus and Volkswagen Golf have all been repositioned at higher prices in recent times.

What does the Mazda3 get?

Apple CarPlay and Android Auto are also standard across the range, as is satellite navigation, a digital radio and an eight- or 12-speaker stereo system depending on the grade. All 3s get alloy wheels and a space-saver spare tyre.

You can add these features to any other Mazda3 for $1500.

All models come with a five-year unlimited-kilometre warranty and 12 months/10,000 kilometre service intervals – the latter figure is now short by Aussie standards.

Based on a new architecture – or vehicle skeleton if you like – the 3 remains an enjoyably communicative drive. It continues to steer and handles nicely.

Mazda ride has always been on the sharp side, but that now seems to have been ironed out. Even more importantly, the traditionally noisy Mazda3 cabin has been quietened to the point this car has moved to the front of the small-car pack when it comes to engine, road and tyre noise.

Interior material quality and presentation have also taken a big step upmarket – but then if you are going to charge a bucketload more money you have to deliver more in return, don’t you?

It’s subjective, but the styling is also a positive. Images just don’t do the low-nosed hatch justice. It really is striking. The sedan is more formal and elegant, and just as appealing.

A rider here; this drive took place in Los Angeles at the global launch so the cars sampled did have some minor differences compared with what we get in Australia.

Still, the effectively carry-over 2.0 and 2.5-litre engines lacked a bit of zing – especially the 2.0. Most manufacturers embrace low-blow turbocharging these days to boost the bottom-end punch of small engines. But Mazda isn’t into that and it hurts driveability.

The counter-argument is they’re simpler engines, so less to go wrong and cheaper to maintain.

Wait for Mazda’s new Skyactiv-X compression and spark ignition engine to arrive later in the year, if you really hanker after expense and complexity.

The new Mazda3 has a longer wheelbase than its predecessor, yet releases no more interior space and does not have adjustable rear air-con vents. The boot in the hatch also drops in size. Not so premium.

The fourth-generation Mazda3 gives every indication it’s a logical, quality evolution of what’s come before it.

The price rise is the downer of course. Mazda will lose some buyers no doubt, but if you can’t afford the 3, then there are heaps of other cheaper choices on offer in this segment such as the impressive Hyundai i30 and Kia Cerato, to name a couple.

Conversely, Mazda’s upmarket push might just tempt some people out of far more expensive brands that still don’t offer anywhere near this car’s value for money.

Even after the price has gone up.