US electric car-maker Tesla continually catches my eye – but not always in a good way.

Its amazing claims, large volume of debt, modest sales and history of broken promises match a certain pattern. They remind me of a company that might, just might, go broke in a spectacular way.

Tesla invested billions to make it happen. Instead the cheapest available version costs $US49,000 ($63,000), and Tesla has missed every production target it has announced so far, producing a fraction as many cars as intended.

I am not alone in fearing for Tesla’s future. Tesla is the most “shorted” stock on the US market – more people are betting on it going down than any other. Investors recently got an acute bout of cold feet, and in late March its share price collapsed.

On April 1, with the share price at its lowest in many months, Tesla CEO Elon Musk decided the best way to assuage fears of a Tesla disaster was by joking about it in a series of tweets.

To call this unusual behaviour from a CEO of a major corporation would be an understatement. But those who questioned Musk’s controversial approach to investor communications have been silenced – since he sent those tweets, stock in the electric car maker is up over 10 per cent.

The bigger questions about Tesla’s future, however, remain.

Visions of the future

Elon Musk has a beautiful vision for Tesla: Shift the world to clean-powered vehicles, and do it with giant charisma and cool factor.

Tesla is brilliant at making their cars extremely desirable. If I could find $100,000 and a place to charge it, I’d get one of their Model S sedans in a heartbeat.

The cars are amazing. And I think this is why the debate over Tesla is so furious. It’s very rare for a company to have such an amazing product and such a … problematic business situation.

Apple and Amazon, two companies Tesla is often compared with, are quite different.

Apple is tidy in the front and the back. It has products as amazing as Tesla’s, and behind the scenes it is an amazing business where billions upon billions in profits pile up on their financial accounts.

Amazon is similar. Its service is highly desirable, and while it doesn’t make much profit, that’s because it diverts profit to fund growth. 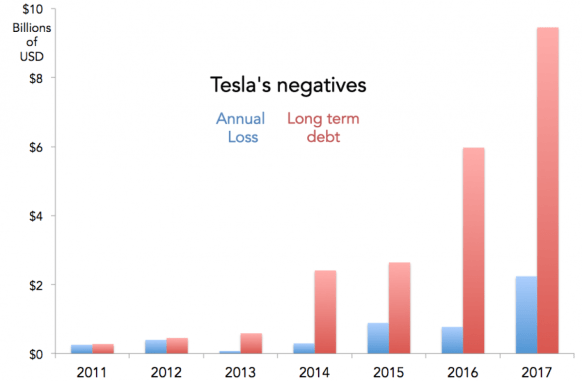 Borrowing to grow is fine if you put that borrowed money to good use. But Tesla also misses key operational targets.

The company originally pledged to make 5000 of its Model 3 sedan each week by the end of December 2017. It failed, managing one burst of 793 in seven working days at the end of the month.

The deadline for making 5000 a week was pushed back to the end of March 2018. Later it was pushed again, to the end of June 2018. It is still unclear if they will make it. The car-maker’s peak reported weekly pace for Model 3 production is 2020 – an improvement, but still not enough.

Immediate insolvency is not the most likely outcome for Tesla, but it would be so catastrophic it is worth mentioning. Could the company run out of money?

Tesla needs cash. It can find three main sources: taking on more debt, issuing more shares, or – and this is the one sceptics think will be hardest – selling cars.

Elon Musk plans to do it the hard way. He claimed last week that in the second half of the year, Tesla will make so much money from selling cars that it won’t need to take on debt or issue shares.

He is betting the future of the company on high production of cars, sustained demand and good margins. There are three reasons to cultivate a kernel of doubt about that bet.

One, the track record of Elon Musk’s claims is terrible. He said the company wouldn’t need any more cash in 2012, and it has raised many billions since.

Two, the track record of Tesla when it comes to making the Model 3 is that it misses every target.

Three, the company needs so much money that even selling thousands of cars a week seems unlikely to be enough.

Not only does Tesla need to turn around its massive losses and simply break even, it also needs to fund a lot of promises:

My view is that something has to give. Either the company delays some of its expansion plans, or Mr Musk is forced to raise money, despite his claims he won’t.

Or – and this remains only a small risk – the company runs out of cash and fails. If I am wrong, it will be because the volumes of cars sold and the margins they are sold at are truly spectacular.

We will learn far more about Tesla’s strengths and weaknesses in early May, when the company reports its financial results for the first three months of 2018.

The exact date has yet to be set, but on results day, Mr Musk and other senior executives traditionally join a conference call to respond to questions from investment banks.

Anyone can listen in. The questions have traditionally been less of a grilling and more a chance to demonstrate admiration, but as Tesla’s stock has nose-dived since the last call, a sterner tone is likely.

Will Mr Musk respond to that higher pressure with renewed insouciance and even bolder promises? Time will tell.

Jason Murphy is a Melbourne-based economist

Tesla: The brilliant company that may meet a spectacular end