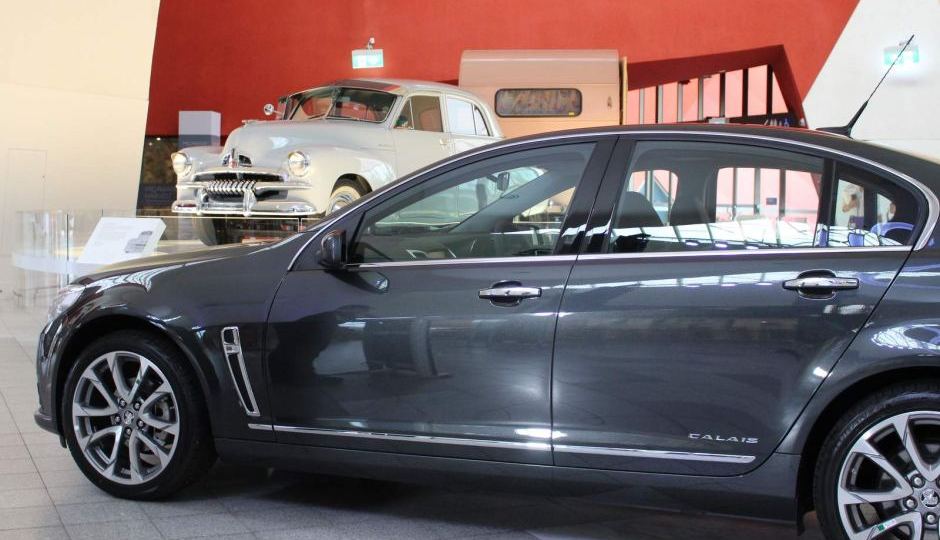 The Holden Calais joins other historic vehicles in the museum. Photo: ABC

One of the last cars to roll off the Holden production line has gone on display at the National Museum for the Australia Day long weekend.

The recently donated Holden VFII Calais was manufactured at the General Motors Holden factory in Elizabeth, South Australia, on October 13, 2017, just days before the plant shut down with the loss of hundreds of jobs.

The car’s V6 engine was made at Holden’s engine plant at Fishermans Bend in Victoria.

The four-door sedan joins other historic Holdens in the museum’s collection, including the 1946 Holden Prototype Car No 1, built in Detroit, and industrialist Essington Lewis’s 1948 vehicle, believed to be the first Holden to be sold commercially.

“When you speak about the story of General Motors Holden in Australia, you’re speaking about an epic story,” NMA director Dr Matt Trinca said.

“[It is] a story of endeavour of innovation, design and enterprise.

“Built for Australian conditions, the robust and economical Holden family sedan captured the public’s imagination when they first rolled off the assembly line in 1948.”

General Motors Holden director of design Richard Ferlazzo said the 2017 Calais had a special place in his heart.

“It represents the pinnacle of our work,” he said.

“It truly is a world-class car and I’m quite certain [that] in years to come we’ll look back on this vehicle and its significance in Australian culture.”

Despite the demise of local car manufacturing, Mr Ferlazzo said Holden was continuing to design and engineer cars in Australia.

“What’s more important is how they’re developed and how they’re built in whatever location with the quality and DNA of the brand that they represent,” Mr Ferlazzo said.

“We’re losing a lot of manufacturing and I don’t think it’s going to be that long before we don’t actually manufacture anything in this country … and that’s quite alarming,” Mr Pryce said.

To celebrate the unveiling of the Calais, Mr Pryce was invited to bring his lovingly restored 1960 Holden FB Special, nicknamed Iris, to the museum.

Mr Pryce was brought up with Holdens and is the proud owner of four old models which he is planning to hand down to his children and grandchildren.

“Everyone wants their house in the suburbs and their Holden — that’s the way it used to be.”

One of the last Holdens made in Australia on display