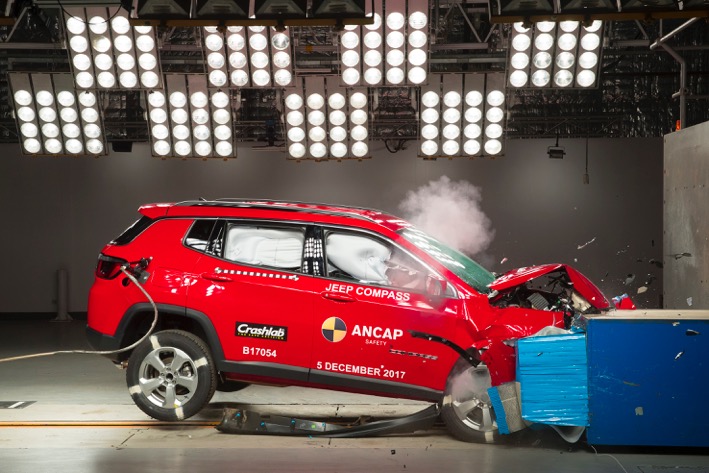 A confusing crash-testing era is finally about to come to an end for Australian car buyers, even as a new Jeep model was awarded the maximum five stars despite not being fitted with the latest crash avoidance systems.

The top rating came from the independent tester, the Australasian New Car Assessment Program (ANCAP), only days after it demoted a new Kia to just three stars for missing out on the same Autonomous Emergency Braking (AEB) technology.

ANCAP says the inconsistencies are the result of the two cars, the Jeep Compass compact SUV and Kia Stinger sports sedan, being tested under different protocols by different organisations.

The Compass was crash-tested and assessed locally by ANCAP while the Stinger was tested in Europe by Europe NCAP under a tougher and more wide-ranging procedure.

ANCAP publishes both its own results and adapts them from Euro NCAP for local ratings.

From 2018 ANCAP and Euro NCAP will be fully aligned and their crash and assessment protocols identical. That means the inconsistencies should be done with and it will be far tougher for vehicles to gain five stars.

As currently equipped, neither the Compass or Stinger would get five stars if they were tested in 2018.

As its name suggests (although car manufacturers give it all sorts of different marketing titles), AEB will warn the driver and then brake a car when it senses a collision is imminent.

It is the latest in a series of important safety aids to flow into vehicles in recent years following on from anti-lock brakes, traction control and stability control.

It is estimated a car fitted with AEB is 38 per cent less likely to collide with the car in front of them. Some systems also have pedestrian detection capability.

The application of AEB is hit and miss across new cars on sale in Australia today. It’s standard on the $14,190 Kia Picanto super-mini yet not even optionally available on some luxury cars.

The Compass was launched last week, with AEB only available as an option on the top two of four equipment grades.

Coinciding with Thursday’s five-star announcement by ANCAP, Jeep confirmed AEB would also be made optionally available on the lower grades.

However, under the 2018 testing process, AEB would need to be standard for the Compass to have a shot at five stars.

The Stinger also launched with AEB not offered on its lowest grades. It is standard on the higher-level models, which get five stars. ANCAP says it will upgrade the entry-level Stingers to five stars if AEB is added to their standard equipment list.

The process will include physical crashes, equipment audits and testing of driver assist systems, such as AEB.

The final star rating will be determined by the lowest-performing area of assessment. More dual ratings, like the Stinger’s three- and five-star results, are likely to be seen under the new testing regime.