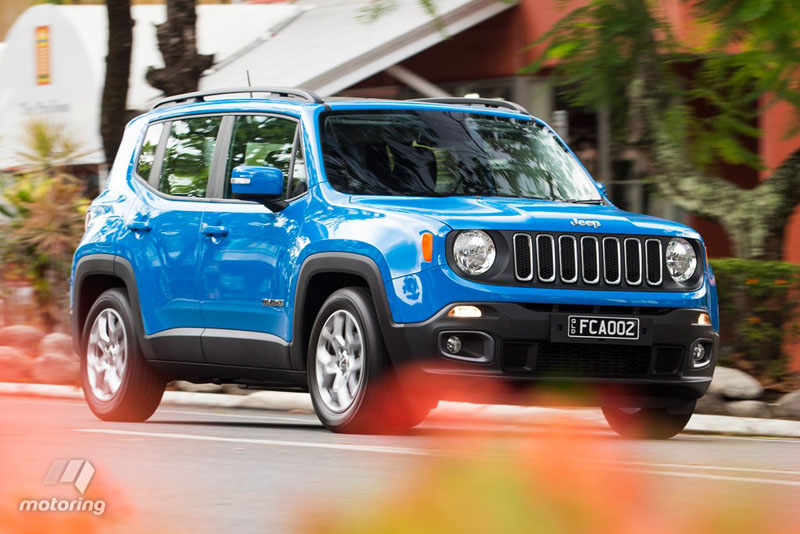 Jeep’s compact Renegade SUV is trendy, stylish, uniquely detailed and just a bit unconventional – a bit like a male supermodel sporting a hipster beard with a hole shaved in the middle for his pet canary to perch.

There’s a ‘My Sky’ removable roof that adds $2200 – a la Wrangler – and a Beats Audio stereo system is offered too. Forget PlayStation or Star Wars Episode VII.

This is what the kids will want for Christmas.

It’s amusing to drive, available with an efficient 1.4-litre turbo-petrol engine and offers loads of space for its size, so it’s not surprising the Renegade managed a very strong 80/100 rating based on my initial impression from early 2015 at the international launch in Los Angeles.

Most of the positive points from that review still stand, including the off-road prowess of the flagship Trailhawk model. At present there isn’t a compact SUV that can match the Renegade off-road, except perhaps for the Suzuki Jimny.

Back then, I speculated that if the price started at roughly $25,000 – like many of its rivals, including the Honda HR-V, Holden Trax and Mitsubishi ASX – it would be a smash hit.

Fast-forward six months and the car lands in Australia with an entry-level price of $29,500. I must admit I had to ask twice when I heard the news from the company’s product planner.

And that price is for the five-speed manual Renegade Sport model paired with an 81kW 1.6-litre non-turbo petrol engine and cloth seats.

The entry-level auto model marries a six-speed dual-clutch transmission with a much tastier 103kW 1.4-litre turbo-petrol four, priced at $32,500, which is also higher than expected.

Consider the range also includes 1.4 turbo-petrol Longitude ($34,500) and Limited ($38,500) auto models and tops out at $41,500 with the 2.4-litre auto Trailhawk, and it could be argued that Jeep has missed the mark in the price-sensitive compact SUV segment.

It remains to be seen if the price structure will have an impact on Renegade’s popularity in Australia but Jeep Australia’s head honcho Pat Dougherty argues the flashy new product targets more expensive machinery such as the Nissan Qashqai and Subaru XV, and is confident it will be very popular in this country.

We had a chance to take the Trailhawk model up some decent hills near the Daintree rainforest but our initial Renegade Trailhawk off-road test in February was far more comprehensive, proving it really can tackle the rough stuff.

As the only model with 4WD, as well as the 129kW 2.4-litre engine, nine-speed automatic transmission and a full-size spare wheel (space-savers for the rest), the Trailhawk has appeal, but as we didn’t get a chance to drive it on sealed roads or above 50km/h our final verdict on it will come later.

One thing that’s constant across all Renegade models is that they’re pleasant to spend time in.

The splashes of paint/mud on the tacho and other ‘Easter egg’ details (see if you can spot Bigfoot in the back!) keep the inner child entertained too, adding more fascination to an already intriguing machine.

Cabin space is very good for a car this size at 4255mm long, which is slightly shorter than the Holden Trax’s 4278mm.

Part of its Tardis-like interior compartment is due to the vertical exterior surfaces, and this spaciousness creates a relaxed feel for front and rear occupants.

Two well-fed male adults fit comfortably in the back seat and the boot is likewise generous.

Another neat feature is the front passenger seat, which can be folded down to make way for extra-long objects, such as a giant pogo stick or set of skis.

But if you want things like rain-sensing wipers, auto headlights, autonomous emergency braking, dual-zone climate-control and rear parking sensors you’ll be looking at $34,500 plus on-road costs for the Longitude at a minimum.

Premium pricing is the major criticism to be levelled at Australian-spec Renegade, but not the only one.

There’s no diesel offering and a couple of the underside dash panels in one of the cars we poked around in wasn’t as flush fitting as you’d find in most of its Japanese-designed rivals.

Head-checking is hindered by a chunky C/D-pillar too, although vision in all other directions is very good.

Autonomous emergency brake (AEB) is a $500 option – but only on the Limited models.

Oh, and all models are front-drive except the top-spec Trailhawk, whereas customers in other countries can option AWD for a couple of thousand bucks on almost any model.

After this first drive on local roads it’s clear this US-developed, Italian-built small Jeep is a capable, practical and fresh SUV that performs well on Aussie roads.

It’s the kind of vehicle that will attract buyers who want to make a statement – and it will be a conversation starter.

I’m looking forward to getting one of these brazen micro Jeeps for a week or two on familiar roads and to see how it travels in the concrete jungle – the one place we’re yet to test it – but I’m confident it’ll tick a lot of boxes.

It’s a breath of fresh air in the burgeoning compact SUV segment – a charming, contemporary and somewhat eccentric answer to the rapidly-changing transportation wants and needs of buyers.

I just wish it was a few thousand dollars cheaper.

What we liked:
>> Fresh, funky design
>> Easy and fun to drive
>> Great use of interior space

Not so much:
>> There’s no diesel
>> High entry-level price
>> 4WD not optional on regular models Easy, fun, but Jeep’s Renegade does not justify the price tag