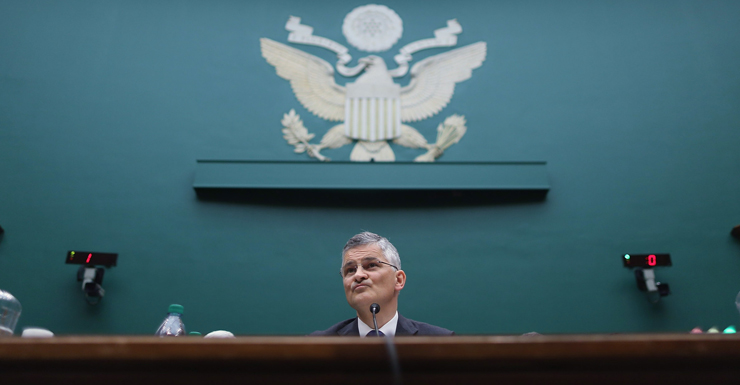 Volkswagen’s US boss has admitted his company’s attempt to blame the emissions scandal on low level employees was “hard to believe”.

At a congressional hearing in Washington DC on Friday (AEDT), Michael Horn repeated the company line that two rogue software engineers were responsible for the installation of a cheating device in millions of diesel cars.

But after intense questioning, The Guardian reported that his response was: “I agree it’s very hard to believe … Personally I struggle as well.”

Mr Horn denied any prior knowledge of the software. Media reports prior to the congressional hearing predicted he would say he knew of the cheating as early as 2014.

“Let me be very clear about this: while I was told about the EPA process, I was not then told, nor did I have any reason to suspect, that our vehicles included such a device,” he said, according to The Guardian.

Meanwhile in German, prosecutors raided Volkswagen offices in a search for evidence.

The scandal has wiped more than a third off the car company’s share price, forced out its long-time chief executive, prompted investigations across the world and rocked both the car industry and German establishment.

On Wednesday, VW confirmed the cheating software was installed in cars sold in Australia.

The software reportedly was able to detect when a diesel vehicle was undergoing emissions testing, automatically switching to a more environmentally friendly mode in order to deceive testers.

When not in testing mode, VW diesel cars emit more than is legally permitted under US law.

The company could could be forced to pay 35 billion euros to refit cars, pay regulatory fines and settle lawsuits, UBS analysts have estimated.