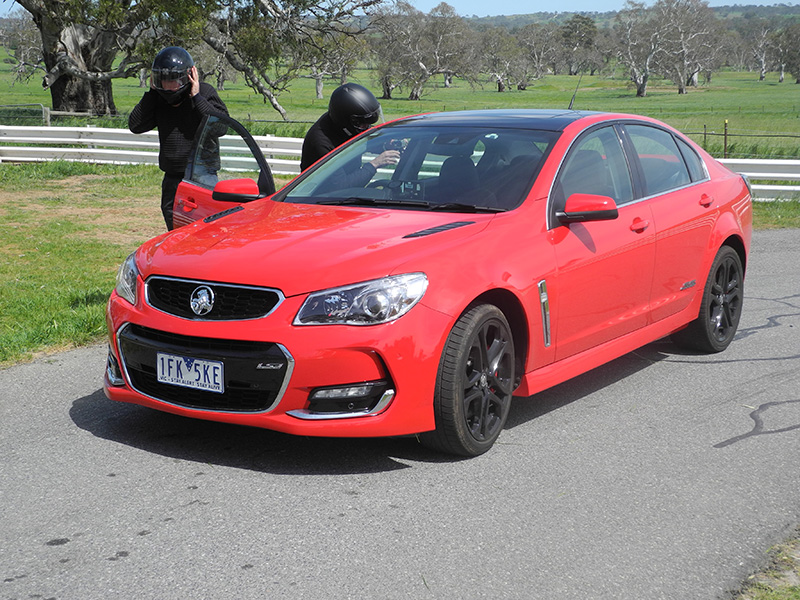 Holden has decided to end 37 years of Commodore production – in which more than 3.1 million vehicles have been produced – with a car for the true believers.

The VFII, which will be the last model produced before GM Holden ends car manufacturing in Australia at the end of 2017, has sporty styling, driving finesse and digital technology.

It comes with a six-cylinder engine, but the pull for petrol heads is a new 6.2-litre V8 which makes it the fastest-ever Commodore. It certainly sounds the goods, with a bi-modal exhaust and mechanical sound enhancer.

The target market for the vehicle is no secret. In fact, the Holden marketers say the Commodore buyer is a male of about 40 years, who earns about $110,000 a year and has a family.

According to Holden general manager of product marketing Benjamin Lasry, this translates to a man who “has lots of demands on his time, loves to get in his car and just go for a fang, but he can still put the family in it and know they’re safe, and knows he doesn’t have to spend a fortune.”

The new Commodore even bucks the trend towards greater fuel economy, using more petrol than its predecessor.

The automatic V8 model uses about 12.9 litres per 100 kilometres, while the six-speed manual V8 uses about 12.6 l/100km which is about 1 litre more than the predecessor.

Holden prepares for life as an import-only seller

Holden took motoring writers on a test drive of the new car through the Adelaide Hills and the Barossa this week and it looks set to get strong reviews, ahead of going on sale this month.

However, the expected strong demand for the last Commodore is a mixed blessing for Holden as the most Australian car brand ever prepares for life as an import-only seller.

It plans to release 24 new models between now and 2020 and admits it has to broaden its appeal to a “new generation” of drivers, which means more small and medium cars plus better sport utility vehicles.

This pitch for youth could explain why the Holden racing team will sport Stars Wars livery when it races at Bathurst on Saturday.

Holden’s executive director of sales Peter Keley said the company dipped to an 8 per cent market share in the last quarter of 2014, but has now recovered to a 9.2 per cent share in September.

“We’re confident about seeing that continual growth for the next four or five years,” Keley said.

But there has been a changing of the guard with Toyota leading the market in the year to date with a 17.3 per cent share, followed by Mazda (10), Hyundai (9), Holden (8) and with Ford back in sixth spot (6 per cent).

New Holden V8 to be the last

Last month, the Asia Pacific chief of General Motors, Stefan Jacoby confirmed that the new Holden V8 will be the last.

“The world obviously is changing and the V8 period is coming to an end,” he said at the Frankfurt motor show.

“It is just more or less a perception from the customer they need a big engine and big horsepower to have the performance,” Mr Jacoby said.

“I know they are charming and I like the sound of the V8 but times are changing. The technology is changing with more or less the same performance. The acceptance is changing, even in America.”

Holden will keep the Commodore name plate after 2017 but the replacement vehicle is likely to be imported from Germany and will not have a V8.

Ford is importing a Mustang, available as a souped-up four-cylinder engine or a V8 model, which arrives in Australia in December.

In a further sign of the times, Holden has announced Victoria Police has taken delivery of a number of Holden Cruze vehicles which will go on patrol this month.

The Australian built Cruze SRi sedan has 1.6 litre turbocharged engine. The model is already used as a police car in Mexico, Russia and Malaysia.