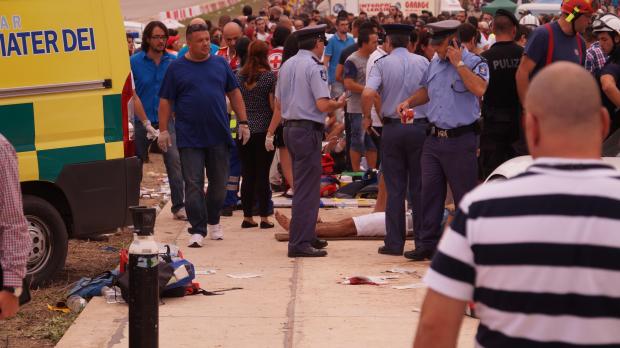 A British millionaire has crashed his supercar into a crowd at a motor show in Malta injuring 26 people on Monday (Australian time).

Of the injured, five were in a critical condition after tycoon Paul Bailey’s Porsche 918 collided with spectators, the Times of Malta reported.

Mr Bailey, 55, and eight others suffered fractures or cuts that required hospital treatment, while a six year old girl and her mother were also amongst the injured.

The millionaire father-of-four and the six-year-old girl were reportedly in a critical condition.

Mr Bailey, who ran a successful communications business before selling in 2012 for $60 million, reportedly owns some 76 cars.

Dramatic vision of the high-speed crash captured the moment the car ploughed into the crowd, sending people running and screaming.

Mr Bailey was driving the car in a demonstration down an unused airport runway.

The sports car clipped grass and then drifted across to the other side of the track, right into vulnerable spectators.

“The car spun out of control, went through the barriers where a large crowd was watching, and into the area of the static car exhibition,” one eyewitness told Times of Malta.

“Many people were hit, there was chaos and screams.”

Speaking before yesterday’s smash Mr Bailey expressed his pride at having brought four supercars for free to support the charity event.

Among the four were the ‘Holy Trinity of supercars’: McLaren’s P1, La Ferrari and the Porsche Spyder that crashed.

Mr Bailey was thought earlier this year to be the first person to own the ‘Holy Trinity”, which have a combined value of $6.4 million.