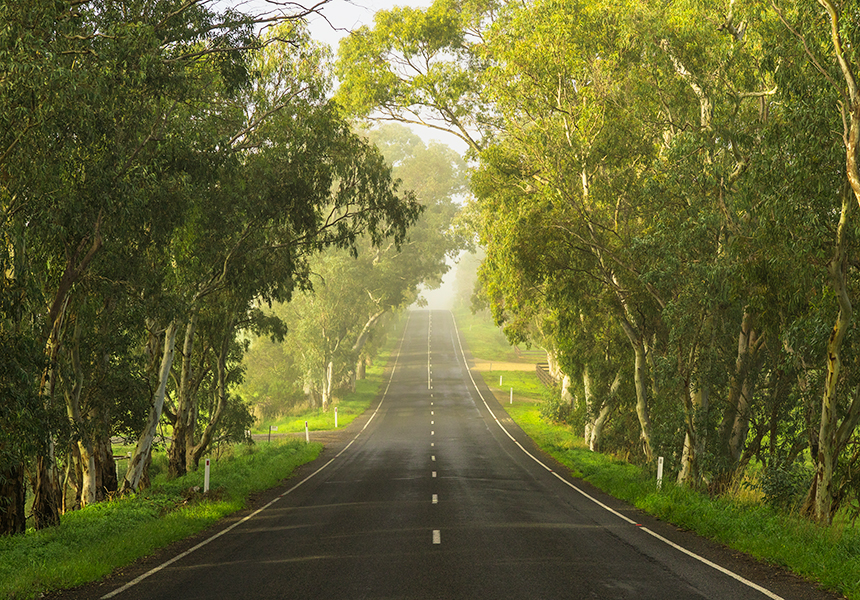 The signs are there and it’s time to get out of the house – and the suburbs.

Scratching those itchy feet is an occupational hazard at this time of year, so we’ve come up with a few ideas, state by state, to exercise your favourite set of wheels.

Or perhaps even create an excuse for you to buy a new one.

Victoria: it really is Great

Okay, so it’s clichéd… But the Great Ocean Road really is one of the world’s greatest coastal drives.

Ideally start at the ‘arch’ near the Airey’s Inlet end for the full experience.

And don’t think it ends at Apollo Bay like many day-trippers, the inland stretches of the Road through to Lavers Hill are fantastic and then there’s the iconic views of the 12 Apostles and Port Campbell further down the line  .

If you must head back to the big smoke early, turn at Skenes Creek and enjoy a cruise up, through and over the Otways via Forest to Highway 1.

Tasmania is blessed with some of the most entertaining roads on the planet – everything from switchbacks to perfectly surfaced high-speed sinews that will test driver, car and the patience of the Tassie police force.

Be warned your demerit points are portable so enjoy, but behave.

If you’re on the way to Mona from the Bass Strait ferry take the long way via the West Coast and spend a night in Strahan.

Get up early and carve the Lyell Highway to Queenstown where the famous 99 Bends await. Or better still, save your pennies, buy a rally car and enter Targa. It’s awesome.

Northern Territory: take it to the limit

It’s attracting television shows, automotive brands, advertising commercials and some considerable angst from safety nannies in the southern states, but it’s a must-do for any driver.

There are only a very limited number of roads around the world without a speed limit and the NT’s Stuart Highway is (almost) in our backyard.

A 204km stretch of the road was derestricted as a trial from February 2014. It went so well, the NT Government, much to the ire of road safety bureaucrats, added another 76km last September.

Head north from Alice Springs and once you’ve passed the Tanami Road turn-off you can open it up.

A word of warning though – this is not a sterilised, fenced-off autobahn. Animals (some big) and road trains (all very big) also use this road, and cambers and road irregularities are aplenty.

Pay attention and enjoy the sensation of not having to second guess where the next speed camera lurks.

The wildflower drives north of the Western Australia capital get all the publicity but the window of opportunity can narrow – so we’re heading to see bigger plants. Much bigger plants. And after that to the most pristine beaches in the country.

Be warned, though, this is not a one-day drive – Australia’s largest state has driving distances better measured in hours than miles.

Point the car southeast from Perth, target Denmark and google ‘Valley of the Giants’.

When you’ve had your fill of giant kauris then head towards Albany and on to Esperance and enjoy empty roads and some of the best white sand beaches in the world.

New South Wales: the back way to Bathurst

Bells Line of Road is known to every keen Sydney driver. It’s iconic like the Great Ocean Road and is part of many a SinCity petrolhead’s pilgrimage to Mt Panorama Bathurst.

The road is heavily policed (there’s a theme emerging here) but even that can’t dilute the joy of the sweeping curves and Mt Tomah’s elevation changes.

The occasional fleeting view of the stunning Blue Mountain escarpments are a bonus, but keep your eye on the road – there are corners that bite.

One day I’ll tell you the story of the motoring journalist that borrowed the latest Torana road-racer special from Holden for his drive to Bathurst; crashed on the way there; returned to Sydney and borrowed another example of the same car and crashed again… on the same corner!

Queensland: get dirty to The Cape

This road trip’s a long one and requires very different equipment than most of our great drives.

The trek to Cape York is one of the ‘big ones’ for Aussies, especially outback tourers. It’s not an easy trip, though not as hard as it once was, and definitely requires the right vehicle and some reasonable offroad skills.

From the Old Telegraph Track north of Bramwell Station is still quite testing. But the good news for tenderfoots is that there are own-vehicle guided trips that allow you to learn on the job – without the breakages and pitfalls that often entails.

Take the family and your fishing rods – but read up and plan, plan, plan. Ron and Viv Moon’s book Cape York: An Adventurers Guide is invaluable.

South Australia: nothing to whine about

Of the capital cities, arguably Adelaide drivers have the easiest access to great roads.

Almost any exit eastward from the city of churches will have you carving tarmac in not time.

The Adelaide Hills and the famous wine valleys beyond have a criss-cross network of fantastically challenging tight and twisting roads that are good enough to host Australia’s top classic car rally.

But they can be busy and speed limits are down, so perhaps the message is to forget your inner boy/girlracer and embrace a slightly slower pace of life.

From the northeastern suburbs of Adelaide, Gorge Road climbs and twists its way through Cudlee Creek and on to Birdwood.

There you need to spend a good few hours at the National Motor Museum – it’s a ripper. And then? Mount Pleasant is a few kilometres on before you head north towards Eden Valley and Henschke, where I’d suggest you park the car! Road trip! The greatest drives in each state