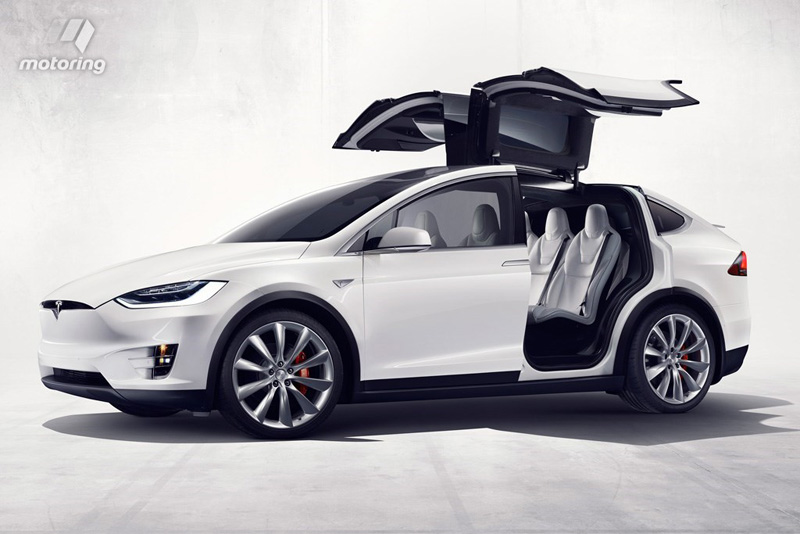 Company Founder Elon Musk introduced the car to an adoring crowd in an atmosphere that was more rock concert than new-model debut in California yesterday.

The Model X leverages technology productionised in the Model S sedan and is expected to be a sell-out success – at least initially.

The three-row ‘falcon wing’-doored vehicle is due to arrive Down Under in 2016, however, waiting lists are already stretching for the vehicle.

Tesla is making big claims for Model X. Performance is prodigious but that’s not the USP. Rather Tesla says it is the world’s safest SUV.

It even has a “bio-weapon defence” button.

Musk says the Model X is the first SUV ever to gain five-stars in every category in US safety authority NHTSA’s rating system.

“If you’re carrying your friends and family around, there’s nothing more important than safety. With the Model X we’ve created the safest SUV ever,” Musk stated during the live-streamed launch.

Five-stars under the NHTSA code suggests a 10 per cent chance of injury in a high-speed front-on accident.

Musk stated the Model X rating is commensurate with 6.5 per cent.

The Model X is also class-leading in terms of side impact, the company says.

Musk also made much of the unique chassis and architecture which without an engine effectively increases the front crumple zone.

“The battery’s location on the floor gives Model X an extremely low centre of gravity, reducing the risk of rollover common in most SUVs.

Musk joked the Model X might even save its occupants in the event of an “apocalyptic scenario”.

“Air cleaniness levels [are] similar to a hospital operating room,” he said. “If there’s ever an apocalyptic scenario of some kind, hypothetically, you just press the bio-weapon defence mode button. This is a real button.”

“We’re trying to be a leader in apocalyptic defence scenarios.”

The vehicle’s top-and-mid-hinged rear doors are perhaps the most striking feature of the Model X’s low-drag design.

Tesla claims 30cm of space on the side of the vehicle is all that is required to gain full access – and demonstrated the capability.

It did not state a minimum height requirement, but suggested the doors will sense roof height to prevent damage.

The Model X’s doors are equipped with “capacitive, inductive, and sonar sensors to monitor surroundings and avoid contact with obstacles around the car, making it possible to park in tight spots”.

In another departure from the norm, the Model X’s driver’s door automatically opens as the car is approached.

“Why should the driver ever need to touch the door?” the website blurb asks.

In another departure from convention, the rear seats are mounted on single-leg posts.

This means the second row seats “move independently, sliding and tilting forward and back”.

Front and rear luggage compartments plus a 2270kg (5000lb) towing capacity tick a number of the other SUV requirements, not necessarily associated with EVs.

All Model Xs are AWD, and Tesla is claiming a 400km (approx) range for the base-grade Model X P90D.

As alluded to above, the Ludicrous P90D accelerates from 0-60mph in 3.2sec.

A key part of its efficiency is low drag. Tesla claims 0.24 and “the lowest drag coefficient of any SUV in history”.