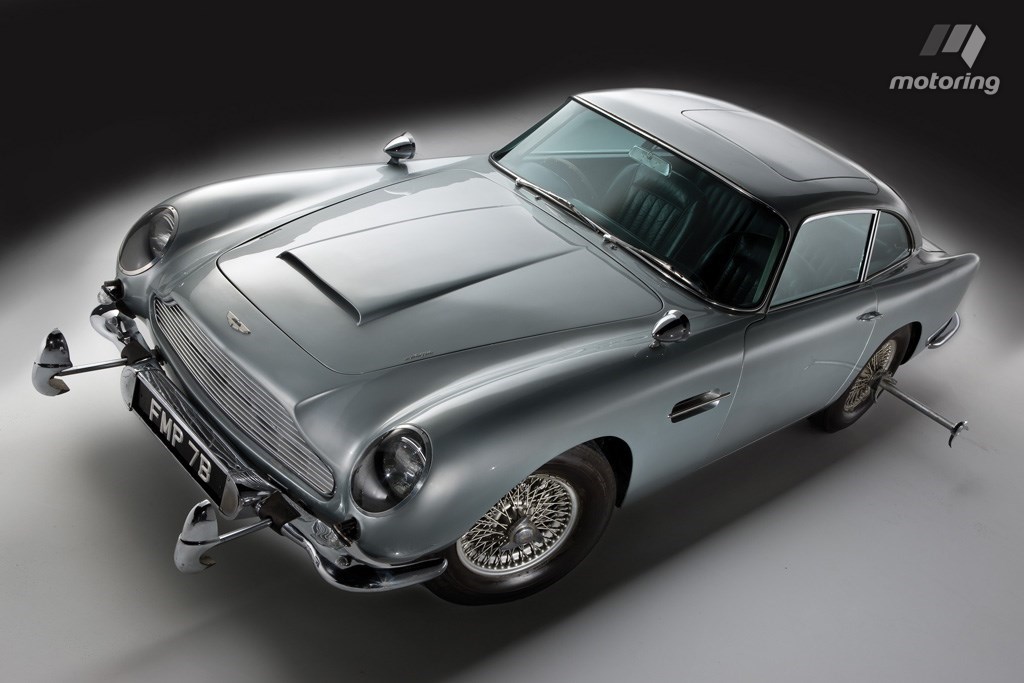 Cars, guns and beautiful women (not necessarily in that order) have been intrinsic to the success of a cinematic franchise that has been with us since 1962.

The chisel-chinned actors who played James Bond actors have changed on several occasions, as have the women, weapons and credibility-stretching stunts.

However, there is every chance that Britain’s best ‘Double Oh’ agent will return every few episodes to the exotic confines of an Aston Martin.

News broke recently that Bond in the soon-to-debut film Spectre will be driving an Aston so special it hasn’t even entered production yet.

The most famous car in the world

This is the car that people who have never even seen a James Bond film can recognise. It was built more than 50 years ago and spent less than 30 minutes on screen in its original cinema releases.

After retiring, Bond’s DB5 should have spent its declining years in a warm, dry corner of Q’s development lab, but lookalikes have continued to make cameo appearances in a range of Bond adventures.

The fate of the original ‘gadget car’ is, however, more mysterious than even Bond creator Ian Fleming could have contemplated.

The DB5 made its Bond debut in 1964 as the undisputed ‘star’ of Goldfinger.

A year later it was back for a less prominent role in Thunderball and similar cars have been seen in more recent 007 flicks.

In truth, an Aston Martin wasn’t the producers’ first choice.

They had wanted to see Bond at the wheel of an E-Type but Jaguar wasn’t interested in giving away cars for which they already had more than enough buyers.

Aston Martin then came up with a developmental DB5 which would be used for stunt and special effects filming and an identical version without the expensive additions to produce studio and normal driving sequences.

In 1997, shortly after being sold to a collector in Florida, the most famous version was stolen from an aircraft hanger where it had been stored. It has never been seen again.

Much speculation surrounds the car’s fate; some suggesting it has disappeared into a private collection overseas or been destroyed to enhance the value of remaining cars.

Or has some dastardly fiend had it converted to a coffee table?

It is impossible to think of a James Bond film without visualising an enthralling chase packed with inventive stunts.

Although intrinsically linked to the Aston Martin brand, James Bond has used, driven and destroyed a host of other models.

Here is an abbreviated look at the array of non-Aston brands that made often-spectacular appearances and departures.

If your fave didn’t make the cut we’re sorry and will send Jaws around to apologise personally.

Sunbeam Alpine: Regarded as Bond’s first car; a rental utterly lacking in gadgets and pretty short on power given the trouble our hero was having when trying to give the slip to an ancient hearse full of Dr Julius No’s henchmen.

Toyota 2000GT: Rare in any guise, the Yamaha-engined Toyotas featured inYou Only Live Twice were the only convertible versions of the model ever made.

Bond producers set their hearts on the beautiful 2000GT but lanky Sean Connery couldn’t cram himself into its cramped cabin.

“No problem,” said publicity hungry Toyota, which cut the roof off two cars.

Ford Mustang Mach 1: American cars featured in Bond films since the very beginning — in Dr Nohe appears in a ’57 Chev Bel-Air — but it took a decade before James got one of his own.

Another rental car, the 1971 Mustang Mach 1 that scored its four minutes of fame during Diamonds Are Forever was a plain old Sportsroof with not a gadget in sight.

However, it did complete a couple of leaps without obvious damage and then two-wheeled its way down a narrow alley to elude the bewildered Las Vegas police.

Ramber Hornet: By the 1970s Bullitt had set the benchmark for car chases so the stunt coordinators needed to take quite extraordinary risks to ensure audiences would still gape and gasp.

With just a computer simulation for guidance, effects creators on The Man With The Golden Gunsent Roger Moore’s orange Rambler  up a ramp, and into what was known as the ‘Astro Spiral Jump’ where the car corkscrewed in mid-air and brought back to earth on its wheels.

Lotus Esprit Underwater Car: Unkind souls might say that you can’t park any Esprit in the rain without it filling with water but somehow the Bond boffins did make one watertight enough to be dropped into the ocean off the Bahamas for underwater action sequences in The Spy Who Loved Me.

The hull contained very little Lotus parts at all but it did leak, requiring the retired US Navy Seal who was engaged to pilot ‘Wet Nellie’ to wear breathing apparatus. A completely different car was used for the road-going stunts.

What would an Aussie Bond drive?

There was of course, a genuine Aussie-born James Bond but his reign was brief.

In 1969, Canberra car salesman George Lazenby snared the most prestigious gig in the realm of male acting, starring as Bond in On Her Majesty’s Secret Service.

He got to drive a DBS Aston Martin and marry Diana Rigg but fell out with producers and never returned.

HSV Coupe 4: A beautiful beast with power and all-wheel grip but may need coddling if taken off smoothly-groomed bitumen.

Like previous Monaro coupes, the Commodore-based shape is well-balanced and timeless and even the basic 5.7-litre V8 has enough grunt to give most baddies the slip.

There’s also sufficient space in the boot and behind the seats for a wealth of gadgetry, perhaps even the small hydrogen generator needed to power them.

Dodge Ram SRT10 Pick-up: Before getting its nails clipped by Mark Skaife in a Maloo, the Viper-powered Dodge ute was the fastest ‘pick-up’ on the face of the Earth.

Even with big wheels and a body kit they aren’t flash to look at but anonymity in the spying game is good.

With a V10 up front they will outrun pretty much anything a villain can field and there’s space in the back for a full-sized missile launcher.

Tough enough to take a decent hit and deliver a bigger one too, so our hero probably won’t need the tyre slashers.

Porsche Cayenne: Bond has never driven a Porsche but a Cayenne Turbo is reportedly used in the Bond computer game Everything Or Nothing so there’s a bit of precedent.

While the Turbo certainly provides a performance edge, we think the 21st Century Bond would find a better technological and ecological fit with the new Cayenne S E-Hybrid.

Space for gadgets is impressive, performance is good (Porsche claims 0-100km/h in 5.9 seconds) and Aussie 007 won’t be handing over the ASIO Amex too often because fuel consumption averages 3.4L/100km.

A licence to drive: the cars of James Bond