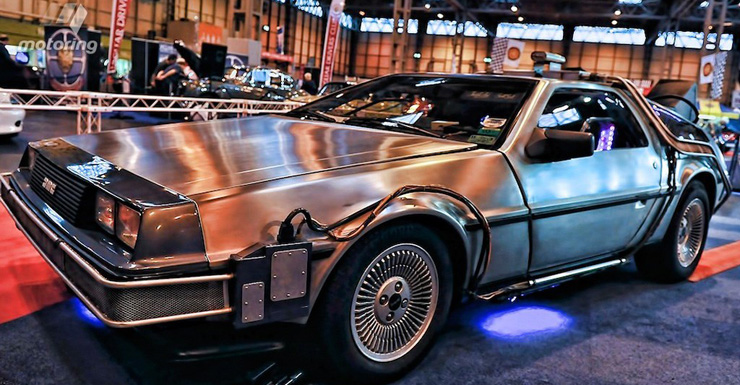 Are you a sucker for cars that steal the show?

In some films and cartoons the cars upstage the characters.

• World’s most Googled car brands
• Looking for a small car? Here are five of the best
• Why Tesla is your new dream car

In fact, fictional automobiles can out-act the humans right off the set, or sit centre-stage from the start.

Here’s our pick of the 10 most striking fictional cars the entertainment industry has dreamed up – spectacularly high-spec models with a whiff of magic about them and, in many cases, the ability to fly.

Australia’s most iconic movie car needs no introduction: a modified 1973 XB GT Ford Falcon Coupe known as the Interceptor. Based on an indigenous Australian design, the black police pursuit car featured at the end of the original Mad Max film and in the first half of Mad Max 2: The Road Warrior. In both movies, the Interceptor boasts a supercharger that Mad Max activates when the mood takes him.

The coolest car in this shortlist must be the Batmobile. When it debuted in a crime comic in 1939 it was just a mildly edgy red sedan, but the concept car grew increasingly formidable, evolving into a physics-defying crime-fighting machine. Christopher Nolan’s version in the latest Batman trilogy resembles a riot-control armoured-car with a front-mounted cannon. Who needs a horn, huh?

Certainly not your typical racing car, he’s known for getting into in all kinds of scrapes: falling into the sea, working as a taxi and even entering a demolition derby. Bad career move, but the softy survives to fall under the spell of a super-hot yellow New Beetle. Another car with a lot of charm in the tank is Chitty Chitty Bang Bang. Chitty was introduced to audiences past her best, but thanks to crackpot scientist Caractacus Potts (Dick Van Dyke), the vintage racing car winds up possessing magical powers elevating her to dream-mobile status. Not every fictional car is cute or cool. Some are evil. Take Christine — she’s a possessed 1958 red-and-white Plymouth Fury from the Stephen King horror novel.

On bad days, her dashboard lights become jealous glaring green eyes. If that wasn’t creepy enough, people in her eerie orbit are prone to dying from exhaust fumes or crashes. Her insurance premiums must be high.

Fuelled by a 1.21-gigawatt nuclear reactor, no car in this list has as much grunt as the DeLorean time machine, which stars in Steven Spielberg’s Back to the Future trilogy.

Like Stephen King’s Christine, the dream machine has true-life roots: the DeLorean DMC-12, commonly known as just ‘the DeLorean’, because it was the only model the firm produced. In the pinch-me world of fictional cars, the ability to fly is almost a given. Yet another example is the 2019 Spinner featured in the brooding science fiction flick Blade Runner.

The jet-propelled machine used by the cops is stunningly mobile — capable of vertical take-off and cruising between skyscrapers. The question though is whether any real car cand compare when the real 2019 rolls around.

The Flying Ford Anglia is the least glamorous of the cars under scrutiny here, but it’s still cool for obvious reasons: the blue Harry Potter 105E Deluxe has been aggressively modified by loopy wizard Arthur Weasley to fly. KITT is the car that keeps the action moving in the 1980s David Hasselhoff adventure series Knight Rider. KITT, whose name stands for Knight Industries Two Thousand, is seriously sophisticated. Among other abilities, the souped-up Pontiac Firebird Trans Am can see and drive itself.

Equipped with a parachute, tear gas, and even an electronic surveillance system, KITT is the smartest dream-mobile on the block. When asked about the wonder-car’s whereabouts, the ever-dry Hasselhoff said it was stuffed and mounted in his living room.

Our final fantasy car is the most primitive. Driven by Fred Flintstone, the cartoon creation resembles a steamroller. You have to love how gloriously crude it is – check out the tatty sheet serving as a canopy. Fred’s primordial machine makes the average lemon look flashy. Honourable mention: The Lotus Esprit from The Spy Who Loved Me

There was a lot to like about The Spy Who Loved Me but the submersible Lotus Esprit – piloted by the droll Roger Moore – has to be the best. We name the top 10 cars from TV and movies