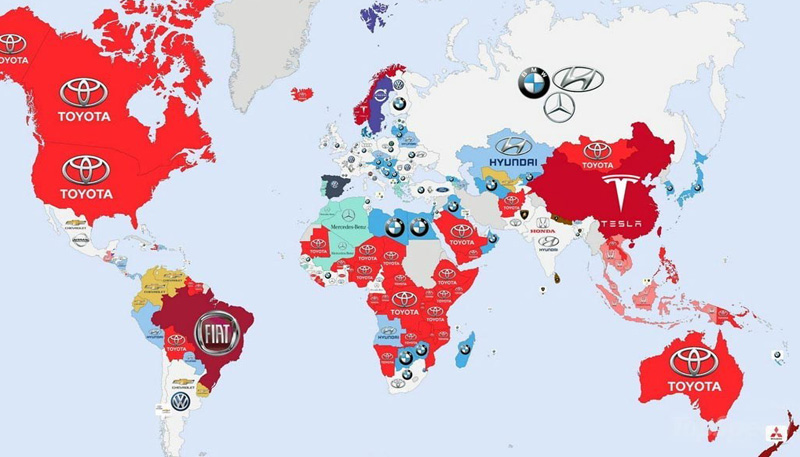 What’s the best way to measure the popularity of cars these days?

Sales generally trump all other criteria – money talks after all – and Toyota wins that one, with 10.23 million sales in 2014.

When it comes to brand value Toyota wins that skirmish too, valued at almost $30 billion.

• Looking for a small car? Here are five of the best
• Why Tesla is your new dream car
• Famous ‘Batman’ dies by his Batmobile

But what if popularity were measured via Google searches?

Well, it seems Toyota would once again be king.

Often derided as selling boring vehicles akin to whitegoods, Toyota clearly has huge appeal in many countries across the globe, emerging as one of the world’s most searched car brands on Google for a 12-month period between April 2014 and March 2015.

Interestingly, the world’s second best-selling brand, vehicles built by the Volkswagen Group (Volkswagen, Skoda, Audi etc) didn’t fare so well on the search listings, despite narrowly trailing Toyota in sales last year with 10.14 million vehicles, and shaping up to overtake Toyota this year.

According to Google search entries collated into the above infographic by TopSpeed, Toyota was by far the most searched-for car brand, dominating keyboard entries across North America.

That’s in stark contrast to the year prior when Ford, Jeep and Dodge sat on the podium.

In Australia, Toyota was also the most searched-for car brand, mirroring new car sales in the country, dominated by the Japanese brand, which also owns Lexus.

South-east Asians tended to search for Honda and Toyota but the story changes when you look at other regions around the world.

Internet users in New Zealand favoured Mitsubishi when it came to Google search terms, while Hyundai and Honda topped the search list in India.

Google has a very small presence in China, the world’s biggest new car market, and while US-based electric car maker Tesla was the most popular brand there, the full story on searches is not clear.

Europeans meanwhile searched for German brands, with BMW, Mercedes-Benz, Audi and Volkswagen all proving popular with search entries, dominating proceedings in many of the 46 countries.

Sweden’s most searched for car brand was Volvo, while Ferrari snagged equal first place alongside the German brands in Albania.

This article was originally published on Motoring.com.au.