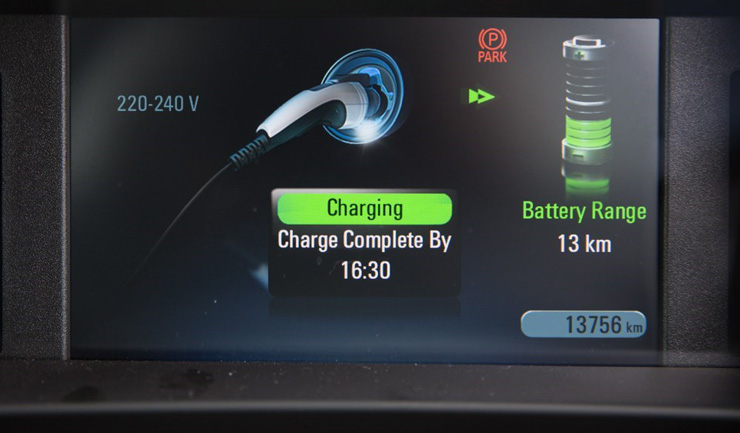 Our top green-car picks are hybrids that combine an internal combustion engine and battery-powered electric motor propulsion, though there are differences in the way they go about saving energy that set them apart.

They span the size and body-style spectrum – so there’s something for the gentle family driver to a more robust open-roader.

Mitsubishi’s petrol-electric compact SUV is a unique proposition which, with the decent equipment levels of the Outlander PHEV (just under $50K) and PHEV Aspire (just over $50K), help justify the price.

There are only seven cars ahead of the Outlander PHEV on the Federal Government Green Vehicle Guide, the Mitsubishi sitting in eighth with an ADR combined cycle fuel consumption figure of 1.9L/100km and a carbon dioxide output of 44g/km.

There are just two other brands with plug-in hybrids – Holden, with its $60K Volt, and Porsche with the Panamera S.

And there’s one other hybrid SUV on the market – Porsche’s Cayenne S E-Hybrid – but it’s three times the price.

Clearly, the PHEV has selling points shared by few, and that’s before you look at how its hybrid tech works.

The Mitsubishi soft-roader can run in a variety of modes, starting with electric-only mode, for around 50km, at speeds of up to 120km/h.

It can run in series hybrid mode – the 2.0-litre petrol four-cylinder spins a generator while the twin (front and rear) electric motors drive all four wheels.

And it can run in parallel hybrid mode, in which the petrol engine and electric motors combine to propel the hefty, 1800kg-plus SUV.

Series hybrid mode introduces the familiar sound of an internal combustion engine, but its note doesn’t tally with vehicle speed, which brings a different kind of strange sensation.

In parallel hybrid mode the PHEV is most like a conventional car, though given the weight, it’s not quite as potent as the combined outputs of two motors and an engine might suggest.

That battery, mounted low in the Outlanders chassis, helps handling balance, but the plug-in hybrid SUV’s strength is carrying the family (it seats seven) with efficiency and reasonable comfort, rather than being a stellar steer.

The conservatism of a Camry with proven Toyota hybrid technology mightn’t be a recipe for excitement, but in terms of reliable, practical and economical motoring, it lays a sound template.

Compared with the base Camry Altise ($30,490) the Camry Hybrid isn’t particularly expensive, at $34,990. When you consider that it provides greater performance and a significant reduction in fuel consumption, it’s a bargain that’s most compelling in this mid-spec form, but perhaps a bit less so as the flagship Hybrid L ($41,490).

The Camry teams a 2.5-litre Atkinson cycle four-cylinder engine in parallel with an electric motor, powering the front wheels via a continuously variable automatic transmission.

However, with 151kW and 350Nm (compared with the basic Camry’s 133kW and 231Nm), there’s plenty of extra performance on offer, even accounting for an extra 100kg in battery and hybrid hardware.

Combined-cycle fuel consumption drops from 7.8L/100km for the regular Camry to 5.2L/100km. In our experience, the hybrid’s figure is achievable and could even be bettered in some conditions, which is brilliant.

The well-built cabin is hushed and offers plenty of occupant space. The Toyota mid-sizer’s ride quality and overall handling capability leave it short of being the consummate touring car or sporty sedan.

However, for urban duty, and where dependability and extreme efficiency are priorities, Toyota’s petrol/electric car makes plenty of sense.

In fact, in an era in which most hybrids remain the realm of well-off, tech-forward early adopters, the Camry Hybrid stands, with few drawbacks, as the overall pick of the Camry line-up.

The greatest compliment we can pay Holden’s series-hybrid Volt is that buyers don’t need to cut it any hybrid-car slack – it makes sense by conventional car standards.

The Holden brings range enough to replace a conventionally-powered small car, is comfortable, refined and well built, and handles quite well.

Only a relatively high purchase price of $59,990 plus on-road costs and (for some) the Volt’s four-seat capacity stand in the way of complete mainstream acceptance.

However, if you’re a progressive car buyer with the means, and tap into the Volt’s battery-electric side, it will recoup some of that outlay in running costs, while doing its bit for the planet.

Not that the Volt is entirely normal to drive.

The eerie, near-silence of electric motor propulsion is weird, as is the disconnect between the accelerator pedal and the petrol engine which, simplistically, works as a generator to recharge the 16.5kWh lithium-ion battery rather than drive the car.

There are certainly upsides, though, such as the syrupy responsiveness and refined progress the 111kW, 370Nm electric motor permits.

In battery electric mode we’ve seen around 60km range on a charge that cost us a few dollars. On the other hand, in petrol only mode, little better than 8.0L/100km is realistic.

The Volt does its best work dodging bowsers entirely – a full 15A mains charge takes four to six hours – and a mix of both electricity and petrol delivers decent efficiency.

Importantly, the petrol generator eliminates the range-anxiety (and limitations) of a purely electric car to give the Volt the compellingly complete family car skill set.

Hey, when you’re onto a good thing, stick to it.

In the case of the Prius V, that’s a transverse front-wheel-drive arrangement of Toyota’s trademark Atkinson cycle petrol four-cylinder teamed with an electric motor via a continuously variable automatic transmission – this time with compact lithium-ion batteries, which free the space for seven seats.

The Prius never stood for driver appeal and, expectedly given that the V is a people mover, this much remains unchanged.

Far from an invigorating drive, the Prius V will only fit the bill for undemanding buyers.

In fairness, that’s probably most prospective people mover customers – and the Prius V rides comfortably, which is far more important.

With just 100kW and 142Nm (the same as the lighter Prius hatch) shifting 1565kg, straight-line performance is similarly unremarkable and the soundtrack is uninspiring. Again, most won’t mind.

Meanwhile, the upside – and the Prius V’s raison d‘être – is that, for those interested in super-efficiency in a family-hauling package, the Prius V’s 1.8-litre engine/electric motor combo endows it with a fabulously frugal 4.4L/100km combined cycle fuel consumption figure.

But given the lack of a truly generous cargo bay, just make sure it will fit all your stuff, too.

Mercedes-Benz’s S300 Bluetec Hybrid is its slowest, least expensive S-Class variant that’s by far the most economical in the range. It’s an interesting proposition in a bigger-is-better luxo-barge line-up for buyers who are not normally known as less-is-more types.

But the S300 Bluetec Hybrid does a different ton – 100 kilometres – on just 4.5L (on the official combined cycle), providing an entirely different kind of driver satisfaction in the process.

And, given the way the big Benz makes its torque – 500Nm from a 2.1-litre turbo-diesel four-cylinder plus 260Nm from a beefy electric motor – it delivers that performance with an effortless thrust that belies the 7.6sec acceleration figure.

Stout performance with startling efficiency – that’s the S300 Hybrid in a nutshell – the rest of the package is pure S-Class.

That is, a supremely luxurious, cosseting large sedan that boasts world-beating comfort and refinement from its chassis to its cabin.

Luxe meets sports sedan when the S300 is hustled over a backroad because it delivers surprising agility and the involvement to shrink-wrap its driver and make light of a two-tonne kerb weight.

As the cheapest S-Class, the S300 Bluetec Hybrid comes at $195K, which is a good deal if you’re shopping at the other end of the line-up.

These are the five best green cars