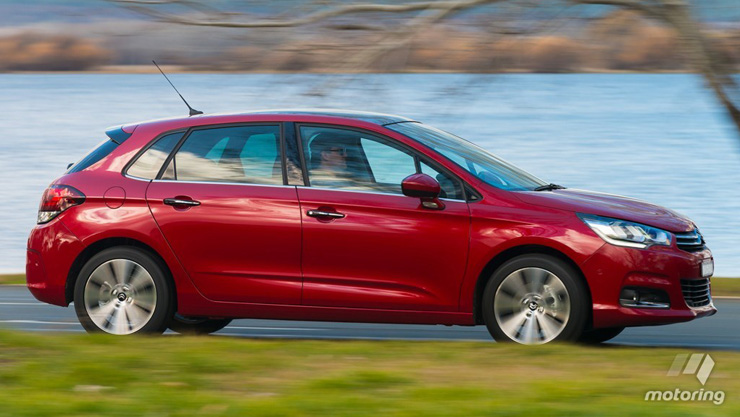 An update for Citroen’s C4 hatch – missing in action in Australia for the past 12 months – has finally delivered the engine and transmission combination local distributor Sime Darby has been chasing for some time.

Now sold in just one drivetrain variant and two levels of trim, the C4 is powered by the same 1.2-litre turbocharged three-cylinder petrol engine introduced here in Peugeot’s 308. A six-speed Aisin automatic and electrically-assisted steering complete the C4’s transformation.

The vagaries of shipping cars from one side of the planet to the other ensured there were only four examples available for the local launch of the upgraded Citroen C4 for 2015 – and all were in the flagship Exclusive trim level.

That means the small hatch was tested with a standard panoramic sunroof, 17-inch alloy wheels (with space-saver spare), keyless entry/start and partial leather upholstery, among other items the base-grade C4 Seduction doesn’t get. Citroen expects this variant in top-spec trim to be the volume-selling variant, despite its $33,990 price tag.

Both cars are powered by Citroen’s PureTech 1.2-litre turbocharged three-cylinder petrol engine, driving through an Aisin six-speed automatic transmission to the front wheels. According to Citroen the smaller engine lifts at least 100kg off the nose of the C4, relative to the weight of previous petrol and diesel four-cylinder engines no longer on offer in the small car.

So apart from the fact the new, Euro 6-compliant engine offers lively performance, it also aids the C4’s handling and steering.

But the C4 with its new-found performance is also quiet and soft riding. The engine is inaudible at idle and while cruising at open-road speeds.

Only when it’s running hard does the three-cylinder make any discernible noise – and then it’s a subdued, six-cylinder-like timbre. The engine will rev to redline without rattling your teeth loose. In fact, quite the opposite; this is a remarkably refined engine in a small hatch selling for less than $34,000.

The Aisin transmission makes a great partner for the three-cylinder engine and is a step well beyond the robotised manual or four-speed automatic used previously. It’s ultimately not in the same league as a ZF automatic, but it comes close, and has a gear for every occasion to take advantage of the engine’s solid mid-range output. Fuel economy finished up at 8.9L/100km, although it was capable of much better than that (down around 6L/100km until the red mist descended).

Also new for 2015 is an electrically-assisted power steering system. Generally good, the system did seem to ‘forget’ to communicate with the driver on those occasions the C4 was being punted harder than normal through corners. The car turns into corners responsively enough, but particularly on the exit from corners – with power applied – steering feel dissipated.

Yet there was nothing wrong with the C4’s handling or roadholding… the small hatch picks up a very neat line through a corner. Even on wet roads during the drive program there was no evidence of torque steer, and the car’s attitude was always composed. On a stretch of gravel, the C4’s tail slid out on a trailing throttle, before the stability control system corrected the oversteer.

For a small hatch, the C4 offers an impressive blend of handling and ride. It was apparent almost immediately that the C4’s ride quality was supple indeed.

Inside, the packaging isn’t as efficient as in the more modern Puggy 308. The C4 is built on the same PF2 platform as the first generation of 308. This leaves rear-seat legroom compromised and the C4 Exclusive, with its panoramic sunroof, is short of headroom too.

Curiously, the seat base in the rear of the C4 seems to be mounted quite high, which doesn’t help the headroom any. Adults could endure sitting in the back for shorter trips, but otherwise it’s a kids-only zone. It should be noted too that there are no face-level vents back there. Those points are offset, however, by the practicality of the C4’s 408-litre boot and the 60/40 split-fold seat, which incorporates a skiport in the Exclusive trim level.

In contrast with the rear the accommodation in front gets two thumbs up. The seats themselves are very compliant and nicely shaped. There’s enough fore and aft adjustment for the front passenger seat to suit even the tallest of adults. Over on the right, the driving position is excellent.

The driver’s side mirror adjusts outboard far enough to eliminate blind spots (not that blind spots are a particular problem in this specification of C4, with standard blind spot monitoring). All controls are quickly interpreted and easy to use. The start button is located in the centre console, very sensibly, and the electric parking brake hand-pull is just aft of that. About the only cause for complaint is the indicator stalk where you would expect it to be in a European car anyway – on the left of the steering column.

The tacho – with a circular bar array to indicate engine revs – is not especially informative at a glance. But the C4 is a car that will shift up as soon as the engine hits the redline anyway, so the tacho is more or less redundant. The view of the instruments is unobstructed by the steering wheel.

The infotainment touch screen, as with many similar systems, requires a certain amount of backing out of menus for different purposes (ie: fuel consumption, sat nav, audio, etc.). Trim materials are quality items, and there was extensive use of soft-touch plastics throughout the cabin. Only the switches for different infotainment menus seemed ‘click-clack’ cheap.

Taking into account the target buyer for the C4, the worst that can be said of it is kids might outgrow the rear seat. Almost everything else about Citroen’s latest small car is appealing. If the price seems steep for a small car with a tiny turbocharged engine, consider the equipment list.

According to the importer, the C4 Exclusive costs just $1500 more than the last C4 Exclusive variant sold here in 2013, but this new model represents $5000 better value.

Now also bear in mind the six-year warranty, six years’ roadside assistance and capped-price servicing, and the C4 should be on your shopping list if you’re one of those buyers who decided to forego large cars in preference for higher-specification small cars after the GFC.

Not so much:
>> Packaging has fallen behind rivals
>> Steering feel occasionally inconsistent
>> Little else

The Citroen C4 delivers plenty of rev for its price tag