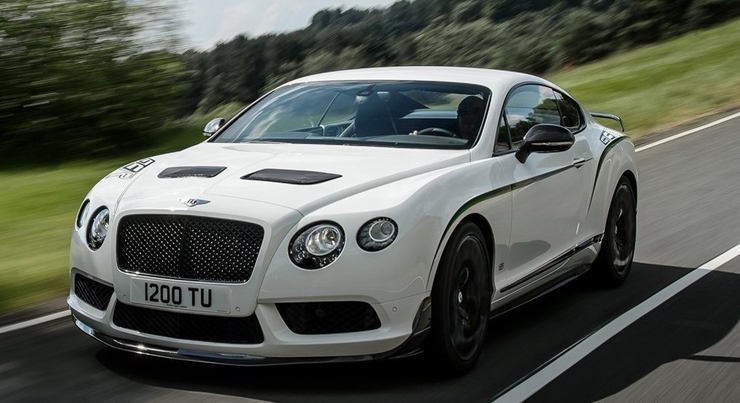 The last time I checked, it wasn’t possible to convert an aircraft carrier into a speedboat. But try telling that to the folks at Bentley.

After all, here’s a company with an overtly rich motorsport heritage, and whose annals are packed with tales of derring-do by the indomitable Bentley Boys, who made a habit of winning Le Mans back in the 1920s.

Glowering at me with its four bejewelled headlights is Bentley’s latest handiwork: It’s dubbed the Continental GT3-R, and it’s a 300-unit-only limited-edition that’s billed as the hardest, most focused driver’s car offered to date by the be-winged brand, apparently drawing its inspiration from the company’s motorsport program.

It’s priced at an eye-watering $669,000 (plus on-road costs), which positions the GT3-R not too far shy of the shock-and-awe Lamborghini Aventador and Ferrari F12.

However, the fact that the GT3-R uses as its starting point the 2.3-tonne Continental GT V8S means it’s more realistically a rival for the likes of the Rolls-Royce Wraith and Mercedes S 65 AMG Coupe than the aforementioned Italian exotics.

And despite its stratospheric pricing, we hear all 300 of the Bentley GT3 are already spoken for, so that’s clearly one heck of a marketing job they’ve managed to pull off.

Motorsport aficionados will have picked up on the car’s visual similarities to the Continental GT3 racer that Bentley has been campaigning with some success in the Blancpain GT series against opposition from the likes of Aston Martin, Ferrari, Lamborghini, McLaren, Porsche, Audi and Mercedes.

The GT3 also has a bespoke Xtrac sequential gearbox, a reworked 600bhp 4.0-litre twin-turbo V8 that’s housed further back in the engine bay for better weight distribution, four-way adjustable racing dampers, dry-sump lubrication, a carbon-fibre propshaft, massive rubber and heavily revised bodywork for maximum cooling and aero efficiency (I’m talking downforce, not a slippery drag coefficient). There’s a raft of other mods too, but I think you get the picture.

In contrast, the GT3-R makes do with relatively minor tweaks. For example, it retains the standard eight-speed automatic transmission, albeit with a shorter final-drive ratio and revised shift calibration for snappier acceleration.

The twin-turbo V8 has also been fettled to eke out 427kW and 700Nm (versus 389kW/680Nm for the GT V8S), which, aided by a 100kg weight reduction vis-à-vis the GT V8S, yields a 0-100km/h split of 3.8sec. The weight-loss program is the result of removing the rear seats (they’re replaced by a parcel shelf), as well as the fitment of a titanium exhaust and various lightweight carbonfibre bits.

In addition, the GT3-R gets revised dampers, resulting in it sitting around 10mm lower than the GT V8S, and it also scores a torque-vectoring rear differential and a tasty set of gloss-black 21-inch rims shod with Pirelli 275/35 ZR21 boots.

You’ll also notice the gloss-black bonnet vents and two-tone green swoosh stripes on the flanks that lend the car a visual link with the GT3 racer, and there’s a splitter at the front and fixed rear wing – both fabricated from carbon fibre – to ram home the motorsport connection, however tenuous it might be. The aero addenda aren’t just for show though, as they also help keep the car planted at high velocities. Other exterior mods that help show prospective owners where all their loot has gone include a gloss-black grille, headlamp bezels, window surrounds and bumper strips. Pop the bonnet and you’ll see the 4.0-litre V8 is also crowned by a carbonfibre cover that’s unique to the GT3-R.

The interior, too, has been revamped in line with the GT3-R’s sporting aspirations with lashings of carbonfibre trim on the dash, centre console and door trims, and it nicely complements the green and black leather upholstery and diamond-quilted Alcantara on the seat facings.

On the minus side, the cabin ambience is dampened somewhat by the obvious VW Group-sourced components, such as the gearshift surround, as well as the HVAC and audio controls. It’s a bit disappointing in a vehicle that’s pitched as a highly bespoke and exclusive offering.

And although it has a menacing stance, you could be forgiven for thinking the GT3-R is just a Conti V8S with a body kit, go-faster racing stripes and nicer wheels if you happen to see one in traffic or parked by the kerb.

So if you’re the one who has forked out $669k for the thing, you may struggle to see where exactly the extra $265k (over a Conti V8S) you’ve outlaid has gone. Push the start button and at least some of these concerns are dissipated as the exhaust note is pure bad-boy. It’s loud, pleasingly raw and laced with a rich assortment of pops and crackles on the overrun. In short, it’s most un-Bentley-like.

You sit quite high in the GT3-R, much more so than you would in an Italian exotic, and visibility in all directions is heavily limited by the gun-turret windows, which also restrict the amount of light that pervades the cabin.

Given that I have just a day with the car, I plot a drive route that comprises a mix of freeway cruising and backroad blasting to get a feel for the GT3-R’s all-round abilities.

During the freeway schlep, I rouse the twin-turbo V8 into life with a couple of stabs on the throttle, and the result is a pleasing bark from the quartet of exhausts. That said, the GT3-R doesn’t serve up the spine-whacking acceleration one might have expected, given that I had just given 700 Newtons free rein.

The primary reason for this no doubt stems from the 2.2-tonne mass that the 4.0-litre V8 is commandeered with hauling around. It piles on the speed alright, but the build-up in speed is linear rather than brutal.

The other thing I find somewhat irksome is that the flappy shift paddles for the eight-speed auto are situated too high and far from the steering wheel rim. You really need to stretch your fingers to effect up- or downshifts, which isn’t what you want to be doing when you’re really pressing on across challenging roads or a racetrack.

With a twisty stretch of tarmac looming ahead, the first thing to do is to set the dampers in their stiffest setting, but even in this mode the suspension is surprisingly compliant. But then, this is, after all, a Bentley so I suppose I should have expected the magic-carpet ride, which is well removed from what you’d get in a Latin hypercar.

As the road begins to snake left and right, I up the pace, and the first impression is that there’s simply no getting away from this car’s gargantuan mass. After all, you can’t just sweep an extra 500-600kg (vis-à-vis a typical 450kW-plus supercar) under the rug and hope no one will notice.

This becomes particularly apparent as I stand on the brakes hard with a tight left-hander approaching, prompting the GT3-R to squirrel noticeably as the weight transfers heavily to the nose of the car. It almost feels as though the GT3-R wants to swap ends, and that’s before any steering lock is applied.

Bentley may make bang on on about how the GT3-R was “born on the racetrack”, but the fact is that it remains a Grand Tourer, albeit one with a slightly more sporting bent than its GT V8S and GT Speed siblings.

So, if what you’re looking for is an opulent, comfortable coupe that’s in its element at fast touring pace on freeways and sweeping country roads, you won’t be disappointed. The GT3-R’s uniqueness and spine-tingling exhaust note will also doubtless be a magnet for many buyers.

But if you’re hankering after a pure balls-out backroad blaster, you should look elsewhere – the same money will get you into a Fezza 488 GTB with change left over, or a Lambo Huracan with even more cashola to spare.

What we liked:
>> Lovely V8 soundtrack
>> Refinement
>> Respectably quick in a straight line

Not so much:
>> Absurd price
>> It’s no backroad demon
>> VW Group switchgear