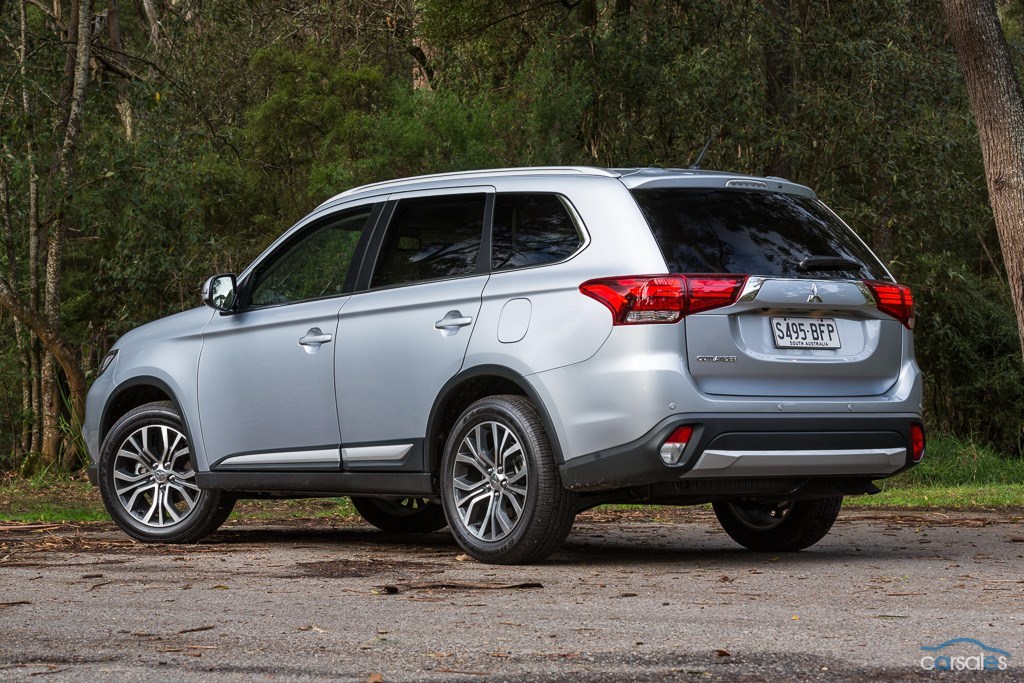 Added visual drama courtesy of samurai-mask imagery provides cosmetic relief for the New Mitsubishi Outlander, a worthy SUV, but one previously blighted by bland looks. Slotted into the VFACTS medium SUV segment, the Outlander is closer than ever to being a mini Pajero – and a rival half a step down from Hyundai’s Santa Fe. The variant on test seats seven and boasts refined diesel power for effective off-road and towing ability.

Mitsubishi’s Outlander now looks more aggressive from the front. The recently facelifted model retains the soft styling cues of the previous model from the A pillars back however.

That soft metaphor doesn’t end with the styling though. At the risk of hijacking Sorbent marketing jargon for explanatory purposes, the Outlander on test was defined by its strength and its softness in varying ways.

• Are fancy cars worth it?
• Small cars to save you big bucks
• Jeep, Fiats upsetting owners

The power delivery was gentle, the ride was supple and the gear changes and braking crunchy and gritty as vanilla ice cream. In corners, the Mitsubishi was prone to roll, and handling and steering were not especially sharp, although the grip on the road was certainly pretty good for a vehicle that would actually go a fair way off-road.

Out in the bush was where the Outlander toughened up and showed its true mettle. The lockable centre diff made no end of difference to its ability to climb a steeper grade that had previously challenged a Subaru Outback and completely snookered a Holden Captiva 7. On three wheels the Outlander would still push on up a hill and even when the Mitsubishi did briefly grind to a halt, turning the steering wheel and reapplying power got the Outlander moving again on more than one occasion. Approach and departure angles impressed, as did wheel articulation, although the breakover angle was a little on the low side.

The Outlander was let down slightly by the lack of engine braking available while making its way down sandy and gravelly descents. Nor did the Outlander come with hill descent control. The Outlander did come with a full-size spare tyre on a matching alloy wheel, however, which came in handy after a flat tyre at the rear sidelined the Mitsubishi for half an hour while I figured out how to drop the spare from underneath, where the jacking point was – and indeed, where the jack and wheel brace were. The ride has already been mentioned, but it needs to be stressed, the Outlander is very soft riding, perhaps even a little underdamped. Tyres clearly played a part in that, and also soaked up road noise quite well on country roads.

For all its comfort, its plushness and noise suppression – not to mention its forte for going bush – the Outlander was not an especially involving drive. Nonetheless, its handling was safe and it mustered roadholding at least comparable with its rivals in its segment, many of which weren’t as effective once the going got tough.

The Mitsubishi’s powerplant ran quietly by diesel standards. Good torque and performance were available off the road as well as off the mark at the traffic lights. Cold starting took a while though; there were some few seconds of delay before the engine fired up. Fuel consumption would get under 9.0L/100km on the open road, but struggled to get below 11 in urban running. That puts it pretty much on a par with a Ford Kuga diesel I tested about two years ago, and that’s a point in the Outlander’s favour, given the larger engine capacity and the extra seating.

It’s probably not widely known, but the Outlander is a safe car in a crash. And kudos to Mitsubishi too for offering adjustable range for the forward collision mitigation system fitted as standard. A toggle switch on the dash to the right of the steering wheel allows the system to look further ahead or limit the range to a shorter distance in front. Set to the latter, it won’t alarm the driver that a car 50m or 60m in front is making a left turn. Also, the system isn’t unduly strident when it does actuate.

Still on the subject of safety, the Outlander’s headlights provided a nice bright beam with a wide spread. They’re among the better lights sampled in recent times.

The driving position in the Outlander was generally fine, although I found the seat base to be a bit short. Seat cushioning was a reasonable balance between soft and supportive, but the seat itself wasn’t especially well shaped.

Because the second row can be adjusted fore and aft for legroom, owners can adjust them back for taller teens in the middle and smaller kids in the rear, or some other permutation to suit the needs of family and friends. For a nominally high-spec SUV, it came as a surprise to discover that there were no face-level vents in the rear, leading to a complaint from a junior member of the family on one wintry night in Melbourne.

Mitsubishi’s interior designers have compensated for that oversight with two-stage seat heaters in the front, although that’s small consolation for the kids.

Speaking of kids, the third-row seat is limited to the littlies, and even the second-row is marginal for adult-level headroom – thanks to the car’s sunroof. But climbing into the very rear seats is made simple by flipping the seat squab forward and sliding the base the rest of the way. There’s a plastic guard providing a non-slip step over the door sill for easier access to the rear. Unfortunately the single seat that flips forward for easy access to the third-row is on the driver’s side.

Aside from the brightwork and glossy piano black trim, the Outlander’s interior was somewhat sombre. It’s fine to look at in the front, but borders on dull in the rear seats. Controls and instruments were easy to use and read though. The Bluetooth audio streaming worked effectively and reconnected with the smartphone quite quickly on start-up.

Satellite navigation was of the “less is more” school of thought – and was all the more welcome for that. No mangled street names or meaningless route numbers, just simple voice prompts telling the driver to turn left in 200 metres.

The lasting impression left by the Outlander in this specification is that it remains an SUV that is generally more competent in the bush.

It’s safe and reliable for a family wagon that will tote seven, and it’s relatively comfortable and good value for the price. However, for the same sort of money consumers might be tempted by a Santa Fe or a Kia Sorento. This particular Outlander will measure up in the eyes of prospective buyers who would rather a package that’s a little more urban-friendly in shopping centre car parks or outside schools. But when you check the length of the Outlander against its ‘larger’ opposition – followed by the price and difference in performance – there’s not that much in it.

The new Mitsubishi Outlander is built for the bush