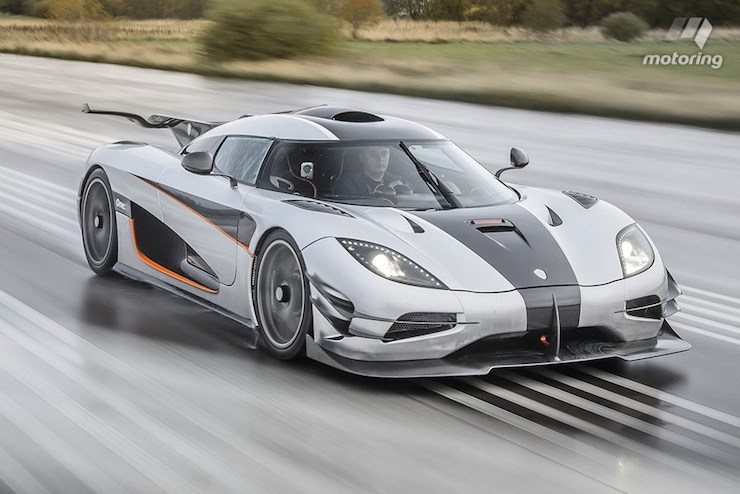 As the battle to decide which among the McLaren P1, Ferrari LaFerrari and Porsche 918 is the fastest mega car, something has been overlooked: none of them are.

The Koenigsegg One:1 makes each of them look, in strictly relative terms, both underpowered and overweight.

This is almost certainly the quickest production car in the world, but the problem is, Koenigsegg can’t prove it.

At least, not around a lap of the world’s most famous racetrack.

For some perspective, it takes a McLaren P1 16.5 seconds just to get to 300km/h before it even drops the anchors. But Koenigsegg’s big plan was to prove the One:1’s place at the top of the hyper-car pecking order by setting a new lap record at the Nürburgring Nordschleife. The company was convinced (on the back of testing last year) that it would be able to demolish the 6.57 time set by the Porsche 918 in 2013.

The attempt was scheduled for last month: the track was booked, the car and crew were in place and the champagne was on ice. And then, the twist that sent the internet into a paroxysm of conspiracy theories: Nordschleife’s new owners, NÜRBURGRING GmbH, announced that the speed limits that had been imposed on parts of the 20.8km long track earlier this year after a fatal crash in a VLN race wouldn’t be lifted for a record run.

This left the One:1 all dressed up and nowhere to go.

Records definitely weren’t going to be broken when I went to Sweden to drive the One:1 several months ago. The weather was cold and wet, with rain varying between drizzle and the sort of thunderstorms that would get Noah worried. It soon became clear that this almost unique chance to experience this 1000 kW monster was mostly going to be an exercise in frustration.

Let’s start with the basics. Context can be hard to find up here in the hypercar stratosphere where most buying decisions tend to be ‘and/ and’ rather than ‘either/ or’, but in volume terms Koenigsegg barely makes a gnat-sized return on the motor industry’s most powerful radar. Throughout 12 years it has produced just 115 cars, fewer than Ferrari builds in a week.

The One:1 is a stripped-and-whipped development of the existing Agera. It’s intended for track use, being lighter and more powerful with a tuned version of Koenigsegg’s own twin-turbocharged V8 tuned to deliver 1000kW when running on its favored diet of E85 pump ethanol.

The 1mW power output is what supports Koenigsegg’s description of the One:1 as the world’s first mega car, and the horsepower output of 1360PS (metric horsepower) working against a mass of just 1360kg explains why we’re supposed to call it the “One-to-one”.

Just seven One:1s will be made, and despite a pricetag of $US2.8m all are sold before we – or any potential buyers – have got to drive the prototype.

The company’s Ångelholm factory is deeply impressive, not because of any glitz or glamour (there’s none) but because almost every part of every Koenigsegg is made on-site, including all carbon components. These include the tub, all exterior bodywork and even the wheels. Koenigsegg is so good at delivering high quality finishes it is often subcontracted by other super-car manufacturers to make carbon parts for display models.

The One:1’s suspension is motorsport-grade and possibly beyond. The vast milled-hub carriers make those fitted to an LMP1 race car look under-spec. There are no rubber bushings anywhere on the car – roller bearings are used instead – and the One:1 also runs a geo-location suspension system that uses GPS positioning to adjust the dampers for individual corners on known racetracks.

Another neat trick is demonstrated as we leave the factory – the One:1 automatically lifts its front end as we approach speed bumps.

My first experience of the One:1 comes from the passenger seat, where things quickly get more exciting than planned. The factory employee charged with demonstrating what the car can do drives us to Koenigsegg’s private test track, a former military runway that allows for high-speed testing at any time of the day or night.

On the sodden surface however, something close to open warfare breaks out between the engine and stability control, with the engine flaring as the rear tyres struggle for grip all the way up to 250km/h. On our second run, we hit an unexpectedly deep patch of water and start to aquaplane.

All those slow motion clichés come true. The One:1 snaps into oversteer, the driver’s hands dancing as he tries his best to hold the slide. For a brief second it feels like he will, but then there’s the sensation of mass shifting, of the pendulum swinging the other way and we start to spin, end-around-end, frisbeeing our way towards the rushing green that edges the runway. We end up facing the way we’ve come having scythed a neat 50 metre track off the tarmac, fortunately without encountering anything harder than wet grass.

Or, to summarise, with an expert driving we nearly crashed on a dead straight runway while trying to travel in a straight line. This could be the day the One:1 earns itself a ‘widowmaker’ moniker.

My turn to drive – and it’s fair to say the intimidation factor is high (even without the falling rain).

The cabin itself is impressive; Koenigsegg is adamant that none of its cars use partsbin switchgear and every surface seems to be made from either carbon fibre or covered in Alcantara. Three VDU instruments sit behind the steering wheel, with the temperature display on the left incorporating a power gauge in PS that reads to 1500. The speedometer goes to 450km/h. Neither is exaggerating.

A low-speed sighting run proves there’s nothing hard about driving the One:1 at everyday speeds, even using nothing more than the first couple of centimetres of throttle pedal travel.

Even keeping well clear of the engine’s boost zone there’s plenty of low-down torque and the steering feels immediately trustworthy – nicely geared and delivering both strong reactions and lots of sensation as I make some tentative inputs (apparently it was inspired by that of the Lotus Exige.)

The gearbox is Koenigsegg’s own design. With two clutches, the only function of the second is to act as a brake to cut the time of high-speed changes. At trundling pace there’s a noticeable hesitation between ratios and a solid clunk as the next one arrives.

Running in third at around 100km/h I make an experimental stomp on the throttle. Acceleration builds calmly for half a second and then, as the boost arrives, so the rear wheels start to struggle. The stability control works impressively well, keeping everything straight without any steering input. But we’re up against the immutable laws of physics, specifically whatever coefficient of friction the vast 345-profile Michelin Cup tyres at the back are able to extract from the slick surface.

At the far end of the runway I line up for the return and make a full bore start, trusting the stability to do its thing and this time it does.

The acceleration feels deeply impressive considering the miserable conditions, but the One:1 is still clearly struggling for grip as we it approaches 200km/h. Not wanting to perform my own pirouette, I back off. Throughout all this the “power” gauge hasn’t gone beyond 600PS.

Time to give up on the runway and head onto the local roads. There the One:1 feels surprisingly compliant, especially as it is the harder-cored version of an already hardcore car. Indeed, it rides reasonably well on its rubber-free suspension and the engine is tractable at everyday speeds, although the quality of the gear change doesn’t improve.

The steering is pin-sharp and even on narrow roads the Koenigsegg doesn’t feel wide or out of place. Lots of noise gets into the cabin; the engine is bolted directly to the carbon fibre monocoque, but apparently the production versions get an active noise-cancelling system that Koenigsegg claims can remove up to 20 dB during steady-state cruising.

We get back to the factory knowing that, even though it is impossible to use more than a scant percentage of the One:1’s potential on road, it handles the challenge better than many other mega-exotics.

After begging the Nordic gods for sunshine before going to bed I awake the following morning to find my prayer half answered – it’s stopped raining at least.

Brave pills swallowed and, after a gentle start, I floor the throttle as I select second gear. The back end is still wriggling and fighting against the torque, but without the previous day’s full-on twerking. Response is far stronger, acceleration a magnitude faster. Forget metaphors involving a forceful shove in the back or a steam catapult, this feels like being fired from a rail gun.

Even in fourth gear the engine is still flaring as the stability control cuts in and out. But then, as the One:1 approaches 200km/h again, something genuinely amazing happens as the vast rear-wing starts to push the One:1 down harder, and the rear tyres start to deliver more grip.

Our rate of acceleration actually increases noticeably. The briefest of glances at that power meter shows it pointing to just over 1000 – the engine is giving it’s all. I run it out to the 8000rpm redline and change up, but then – with the end of the runway looking very big in the windscreen  – immediately stamp hard on the brakes, which pull the One:1 up with room to spare.

After two days I’ve spent no more than five seconds of experiencing this astonishing car in full flight, but it’s enough to realise just how special it is.

I would love to see what a Koenigsegg One:1 could do around the Nordschleife, but I have absolutely no desire to sit in one while it attempts a fast lap.

It might not be able to definitively prove that it’s the leader of the pack in terms of raw performance, but it almost certainly is. For now, Koenigsegg has already announced it plans to build an even faster car, the part-hybrid Regera.