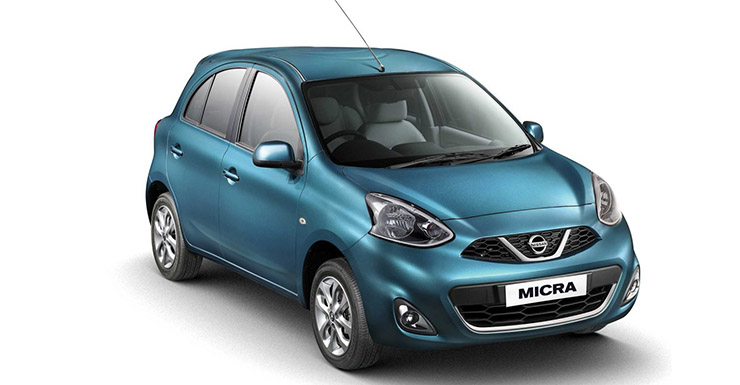 Nissan has given a new face to its ageing Micra, er, micro-car for 2015.

The update, which brings Nissan’s ‘V-Motion’ design language to the Micra for the first time, consists of a new bonnet and guards, along with restyled bumpers, updated wheels and new lighting. All told, more than 50 per cent of the body panels have been changed.

The freshened exterior is augmented by a facelift for the interior, building on its open, airy feeling with a new centre cluster, dashboard and seat trim to go with surfaces that have been chosen for ‘higher quality look and feel’.

• Why fancy cars may not be worth the cost
• These small cars can save you big bucks
• Want to save fuel? Here are some top tips
• Driverless cars no longer just science fiction

Equipment is also updated to compete with more modern members of the micro car market, including the Suzuki Celerio and Mitsubishi Mirage, both of which have outsold Micra in recent months (along with the Fiat 500 range).

Cruise control, power windows, a USB socket and auxiliary port and Bluetooth with audio streaming capability are now standard-fit – and not before time – on the entry-level ST manual, which retails for $13,490 (plus on-road costs).

If the upgrades have modernised the Micra, it’s what lies beneath that could still be considered as trapped in the past.

Micra retains the characterful 1.2-litre naturally-aspirated three-cylinder engine, which generates 56kW and 104Nm while returning claimed economy of 5.9L/100km in manual form (jumping substantially to 6.5L/100km with the auto).

It’s a fun engine to use, sounds interesting and likes to rev, but the choice of five-speed manual or four-speed automatic gearboxes dates the experience somewhat.

It may be a case of ‘getting what you pay for’ (and, indeed, the cheaper Celerio and Mirage both employ five-speed manuals, though with optional CVTs), but with the Ti nudging $17,000 the argument for a transmission upgrade – or perhaps the 1.2-litre turbo-four, six-speed manual combination that’s now found in the JUKE, if they fit –  becomes stronger.

Approaching the entry-specification ST manual first, the fresh face does add some appeal, although the overall proportion is obviously not significantly different. The same is true of the interior, with its basic yet functional layout. In many ways it’s a reminder of how simple cars used to be, with easy-to-use controls for the air-conditioning system and audio. The ease of gaining Bluetooth functionality, however, brings you back to 2015.

The sheer size of the side windows endows the Micra with a light, spacious feel inside, with excellent all-round visibility and head-room giving it a size-up ambience. It’s just a pity the improved trims still feel brittle to touch, especially around the dashboard and on some of the switchgear.

The Micra ST manual has a light clutch action, making for easy getaways. Once you’ve revved the rorty three-pot towards 6000rpm, the action between gears is clunkier than you may expect, especially across the gate, with a longer travel than the gear lever suggests.

It’s not bad, but in comparison to the smooth-shifting six-speed manual of the JUKE it feels its age. You will also need to access different gears with some regularity, as for all its character the lack of urge requires you gear-down for most hills, especially when you are making the most of the roomy cabin by going four-up.

Once over that hump and at a cruise, the Micra is nicely quiet inside at highway speeds, though oddly you do notice the driver’s door card reverberating as one of the four speakers in the Micra’s audio system moves to the beat.

With light steering response at parking speeds, the Micra handles the shopping run nicely, but once up to speed the delay between input to the front-end responding can become disconcerting, with a fair degree of body-roll contributing to the sluggish feeling. You can smooth it out by timing your turns, but it takes some adjustment.

Braking, via ventilated discs up front and drums in the rear, behind 14-inch steel wheels (covered by hubcaps) and 165/70-series tyres, offers reasonable retardation and pedal feel given the ST’s 943kg tare mass.

Stepping into the Ti sees a welcome step-up in cabin quality with softer cloth trim and nicer plastics applied to the rear of the cabin over the ST.

Also welcome is the adoption of a touchscreen, with satellite navigation and reversing camera adding much convenience along with the auto headlights, alloys and other accoutrements.

On the road there’s little to choose between the variants in terms of ride (reasonably plush even with the larger 15-inch alloys and 175/60-series rubber of the Ti), but the adoption of the auto changes the characteristics of the engine somewhat, as it fights with extra weight (969kg for Ti auto, the gearbox accounting for 13kg) and wider ratios. On test, where the manual returned 5.7L/100km (better than the claim!) the auto returned 7.0.

Is the Ti worth the extra coin? It is… if you’re comparing it to the auto ST, which adds a significant $1800 to the manual’s base price ($15,290 plus on-roads). But with the added value and lower running costs factored-in to manual Micra ST ownership, the final decision is really down to personal preference. If it was my money, I’d take the manual.

Do you get what you pay for with the cheap Nissan Micra?