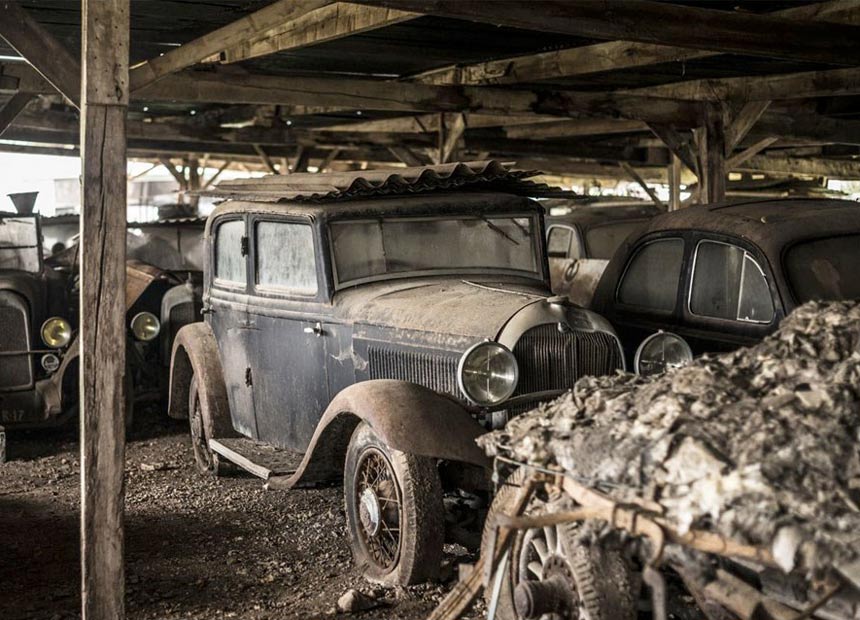 It’s the kind of find car lovers can only dream about.

A leading French auction house has made the incredible discovery of a collection of vintage cars, including a Maserati and Ferrari, languishing on a dilapidated farm.

• The coolest new cars that won’t break the bank

The Collectors’ Car Department at Artcurial Motorcars stumbled upon the vehicles in the west of France, where they had been hidden under makeshift corrugated iron shelters for 50 years.

The valuable collection includes 60 unsullied classic cars spanning from the early 1900s to the 1970s, including a Ferrari 250GT SWB California Spider once owned by French actor Alain Delon.

It appeared in the 1964 films Les Felins, starring Delon and American actress Jane Fonda and has appeared in photographs with Shirley Maclaine.

The Ferrari was discovered under a pile of newspapers and is one of only 37 examples built. Although every other model had been carefully documented by historians, this particular car’s whereabouts were unknown until the discovery.

Put together in the 1950s by entrepreneur Roger Ballion, who wanted to preserve pre-war automobiles in museum surroundings, the cars in the collection remain in undisturbed condition after being hidden away for five decades.

They were taken out of action after Baillon suffered a business setback in the 1970s and was forced to reduce the size of his original collection by some 50 vehicles.

The roll call of the collection’s other famous marques is impressive: Bugatti, Hispano-Suiza, Talbot-Lago, Panhard-Levassor, Maserati, Ferrari, Delahaye and Delage are all represented, along with many famous coachbuilders including Million-Guiet, Chapron and Saoutchik.

Matthieu Lamoure, Managing Director of Artcurial Motorcars, said the discovery was one for the history books.

“Not since the revelation of the Schlumpf Collection in Mulhouse has such a group of emblematic automobiles been disclosed and what is more, in such original condition,” Mr Lamoure said.

Artcurial expert Pierre Novlikoff described the collection as “a treasure”.

“Never again, anywhere in the world, will such a treasure be unearthed,” Mr Novlikoff said.

“These sleeping beauties are clothed in the precious patina of time gone by. A collection like this can’t fail to arouse the passions of those who love automobiles, as well as art and history enthusiasts.”

The collection will go under the Artcurial hammer in the first part of the traditional sale at Retromobile Salon in Paris on February 6, 2015. Estimates of each car’s value range from 500 Euros to several million Euros.

This article originally appeared on motoring.com.au.