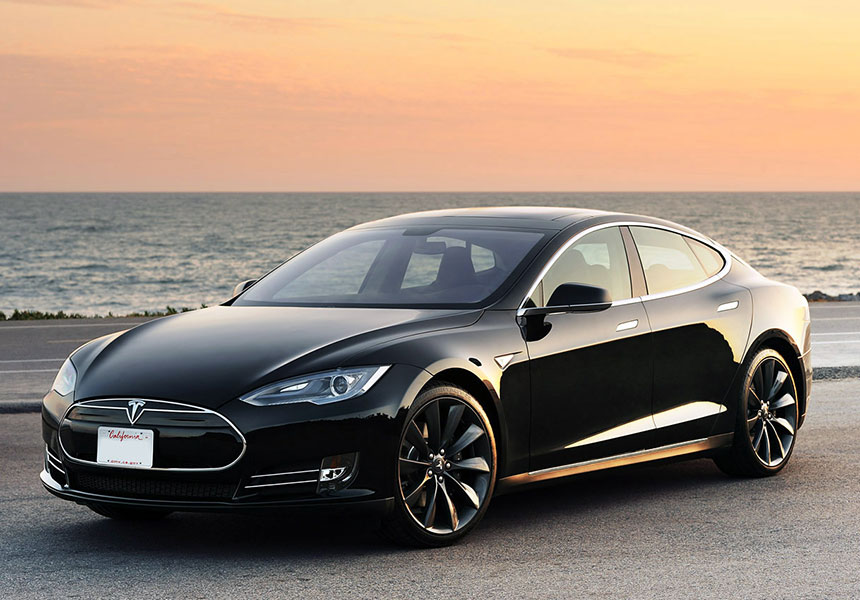 The new vehicle market is so crowded it’s almost impossible to imagine a car coming along that truly resets boundaries. But the Tesla Model S does just that.

On sale in Australia two years after it first launched in its home US market, the all-electric luxury grand tourer manages to offer performance worthy of its looks and range approaching orthodox rivals – all without emitting a puff of CO2.

If your image of electric cars is shopping pods only good for a few laps around a city block before having to be plugged in and recharged overnight, then meet the Tesla Model S – a car that will change your way of thinking. The brainchild of American internet billionaire Elon Musk, the Model S is now on sale in Australia, offering performance in terms of both speed and range that no other EV can match.

You can say the same thing about the styling too – no other EV has the panache the S’s sizeable but still sleek aluminium five-door liftback body delivers.

Tesla hasn’t hedged its bets by fitting a range-extending petrol engine either. Instead, the Model S is stuffed with enough lithium-ion batteries to give it a real-world range beyond 300km – even beyond 400km if driven with some care.

That means range anxiety – where you worry about ending up stranded by the side of the road with a flat battery and no way to recharge it – is not the issue for a Model S driver that it is for owners of other pure EVs.

The Tesla combines that range with impressive performance. Driving the rear wheels via a single-speed transmission, the Model S chirps its tyres, jinks a little sideways and fires away hard, accompanied by growing wind noise and rumble from the massive 21-inch Michelin Pilot Sport tyres. The P85+ claims a 0-100km/h time in just 4.4 seconds and it feels faster. And in those seconds you are confronted by a decision; do you embrace this exhilarating acceleration or reject it because it’s not accompanied by the sound of exploding fuel and threshing valves?

Here’s a tip. Embrace it. Wholeheartedly. There is something universal about the emotional rush moving fast delivers – be it in a car, on a motorcycle, bicycle or skis. An internal combustion engine is only one way to achieve it. A good way, but only one way…

By the way, the 85 part of that name denotes the battery pack’s performance in kiloWatt hours. Think of it like the size of the fuel tank in a car with a conventional internal combustion engine.

The more kWh you have the further you can potentially go. By comparison, the BMW i3 electric vehicle also just launched in Australia has a 21.6kWh battery pack and an official range of up to 160km.

What the Model S can’t do, of course, is recharge any more quickly than other EVs. Once it’s drained you’re talking hours to refuel fully from a wall charger – which Tesla supplies to buyers.

You can option dual chargers to accelerate the process and a speedy supercharging network is coming, Tesla promises, that will hook Melbourne to Sydney via Canberra by the end of 2015 and extend on to Brisbane in 2016.

But if the Model S is drained, you’ll have time for a coffee – and a sandwich, and a cake and a walk down the street – before you’re rolling again. The centrepiece is a 17-inch touch-screen that allows you to control and personalise most of the car’s functions. You will never struggle to see directions on the sat-nav screen again! There is also an instrument panel behind the flat-bottomed steering wheel that provides instant information about speed, consumption and range.

The few functions that aren’t managed via the touch-screen, like the gear selector, power windows and cruise control, are operated by buttons and stalks that come from the Benz parts bin – no doubt the result of the business relationship the two companies have.

It is an expansive five-seat interior (we don’t get the optional third-row kiddy seats offered in the USA), with a flat floor and reasonable rear headroom despite the sloping roof. The front seats are good to look at but offer mediocre support. The lack of proper door or overhead grabs for passengers exacerbates that.

The Model S also lacks in-cabin storage. There are no door pockets, for instance. Where it does impress is luggage space, as the there is 150 litres under the bonnet where an orthodox engine would sit and another 744 litres under the rear hatch – which expands to a mammoth 1645 litres with the bench folded. But once you start adding battery and motor performance and selecting from a long, long list of options, the dollars start escalating quickly. We’ve dealt with the equipment and option levels here.

The good news is that car starts at roughly the same money as the P85+. The bad news? You won’t be able to take delivery until mid-2015. So. Crunch question. Is the Model S worth the money?

For the shock value alone… absolutely. Then consider luxury cars of similar performance like a diesel Porsche Panamera cost more and don’t look anywhere near as good. Not that the big Porsche is the only opposition of course – you could throw in Audi A6, A7, A8; BMW 5, 6 and 7 Series and the Mercedes-Benz E- and CLS-Class just to name a few – and the Tesla has its pros and cons against all of them.

The Model S’s big detraction is, of course, recharging time. But at least the kilometres you can cover between them is substantial – and you have issued zero emissions while doing it (as long as you use green energy to recharge).

So if you are concerned about what the world might become without the internal combustion engine then drive the Model S. We reckon instead of worrying about the future you’ll look forward to it.

This story previously appeared in motoring.com.au.

Is the Tesla Model S electric car worth the cash?