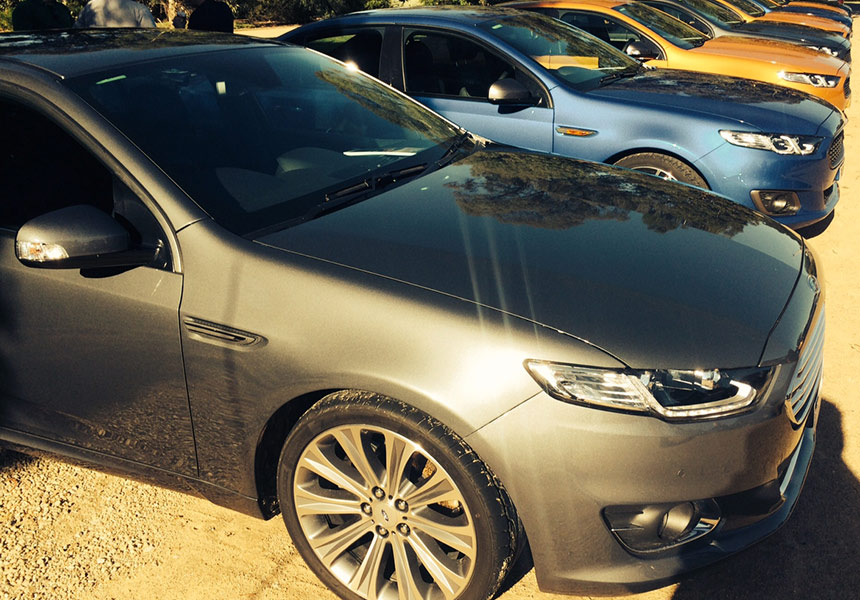 The arrival of a new model of an iconic car is usually celebrated by devotees and the industry.

But the backslapping at the launch of the latest Ford Falcon, of which millions have been sold since it launched in 1960, was tempered by a feeling of loss. This is also the last of its kind to be built in Australia.

The thunderstorms that burst overhead in country Victoria during the launch added to the sense that change is coming as all three local carmakers — Ford, GM Holden and Toyota — end local production in the next three years.

Ford wants to end its local production by October 2016 on a high note, but it has to make the transition to being an import-only business, walking a fine line between offering motorists fresh product and a sense of continuity.

All three local car makers have to make that transition, which involves trying to take buyers with them when many only see the headlines about closure. After Mitsubishi closed its plant in 2008, it had to reassure buyers their cars would still be available as imports.

One of the many peculiarities of this industry is the intensity that goes into creating cars at the product development stage (PD). Sure, there’s corporate mumbo-jumbo and marketing speak, but those working in “PD” talk about the “DNA” of brands and models as a living thing.

It clearly gets under their skin, even into their bloodstream.

Take Ford’s Australian-born head of engineering in the Asia-Pacific, Trevor Worthington, who flew down from Shanghai for the launch of the new Falcon and the other locally-made Ford, the Territory SUV.

Mr Worthington told journalists that the launch of the last Falcon came at an “important point” for Ford Australia and a time for reflection. But he made clear that the line of work required looking ahead rather than in the rear vision mirror.

“I guess the key thing about the product development team is we’re always focused on what happens in the next cycle. We’re already focused on what’s happening in six months, 12 months, 18 months.”

This point was underlined by the Falcon’s drive program in central Victoria crossing paths with three partly disguised models of the new Ford Everest out on a test run.

Ford Australia solemnly swore it was a coincidence, but with car companies, how can you tell? They love a bit of cloak and dagger, “spy” photos and secret prototypes.

But it was apt in many ways. The old days of the large car in Australia— when streets and families swore allegiance to either the Ford Falcon or the Holden Commodore— are long gone, and part of the reason for that is outsized SUVs like the Everest.

The other trend was towards small cars, which jointly put the market share of large cars, like the Falcon and the Commodore, into a pincer grip.

The sighting of the Everest was a reminder of the globalisation of the car industry, the shift away from “orphans” like the Falcon that are made and sold in one country.

The Everest— like the Ford Focus, the Fiesta and the big Ranger ute— are made in Thailand, which is the “Detroit of South-East Asia”. The Ford Mondeo and the Cougar are made in Valencia, in Spain.

Even Ford’s glamour US performance car, the Mustang, is made in Flat Rock, Michigan, rather than in Detroit.

Ford Australia’s chief executive, Bob Graziano, says the changes in the business extend to a change for Ford dealers, which includes having a concierge who greets customers and leaves them to their own devices unless they want to speak to a salesman.

“It is a big transformation and vehicles like Mondeo and Everest and the Mustang will play a role in that. In terms of sparking that curiosity in people’s minds about what is happening at Ford.”

The Falcon and the Territory are both based on the same underpinnings, which are known as the platform, and Ford has produced one last local V8, the XR8. As several Ford managers said this week: “We love all our children but this one is special.”

The new V8 has already been hailed by petrol heads, who scrambled to get tickets to attend a “Falcon fanatics” gathering at Avalon airport where the new car was driven by supercar driver Mark Winterbottom.

There was some good news. Ford repeated that it wants to keep its research and design centre at Geelong, design centre in Melbourne and a proving ground in between the two in the You Yangs.

Collectively, the Victorian design and engineering operations are on a par with a handful of other Ford centres in Dearborn, Shanghai and Cologne.

Mr Worthington says the Australian operation now has a full book of work, employing just over 1000 engineers and 300 technicians.

“The group in Australia are going to be fundamental in the work that we do in the Asia-Pacific for the foreseeable future because of expertise, their level of competence, the ability to execute programs on time and on budget.”

This global design work includes the Fiesta and Figo hatchback for India, an Escort for China, and a global Ranger pickup.

Holden, perhaps, has a more obvious place on Australian folklore. Witness the new book by author Paddy O’Reilly, It Happened in a Holden: A Celebration of the Holden and the Australians Who Drive, Ride, Love and Bicker in it.

However, Ford began assembly Model T Fords at Geelong the mid-1920s and it lays claim to inventing the ute in 1934. That’s a major contribution to national life and culture.